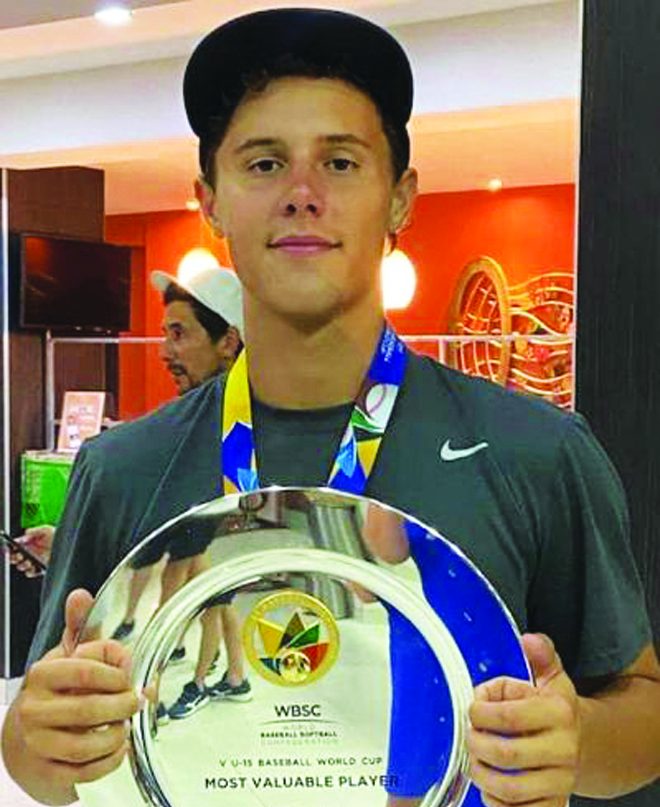 Unless you’ve been living under a rock, you’re well aware of who Coy James is, and if you don’t know, now you do.

On July 26, he was among 72 players invited to try out for the U-15 national baseball team.

On Aug. 19, James was named to the 20-man roster to represent the United States in the U-15 Baseball World Cup in Hermosillo, Mexico.

Wait. This gets better.

“You can’t really say enough about his performance. He was steady, he was powerful, he ran, he hit with two strikes. He kind of did everything that you want to do offensively.”

“It was one of the best feelings of my life looking down and seeing those three letters on your chest and standing and hearing your national anthem playing,” said James, who last spring became the first player in Davie High history to hit .400 as a freshman. “Wearing those three letters just made me want it more for my country and made me want to win and play the best I could.”

In Team USA’s opening game, it obliterated South Africa 29-0 in four-and-a-half innings. James went 2 for 3 with five runs and two RBIs. He batted second in this game; he batted leadoff in his next seven games. While James played shortstop for the War Eagles, he played exclusively in center for Team USA.

“Going into team trials, our leadoff spot was a little bit uncertain, as was our spot in center field,” Briese said. “Coy is a natural infielder, but we put him in the outfield to see how he would take to it. He took to it really, really well. He kind of looked like he was going out for long touchdown passes when he was running balls down.”

“I really liked it out in center,” James said.

Something magical happened the next day against Venezuela. When Venezuela retired the first batter in the bottom of the seventh, it was looking pretty bleak for Team USA as it trailed 4-1.

“We talked about winning a gold medal from the very beginning, and I’m sure some people had it in the back of their mind: ‘Are we going to have our hopes and dreams dashed in the second game of the tournament?’” Briese said.

James stepped up with one down and singled down the right-field line. That ignited an unbelievable comeback.  The next three batters walked. Then came an infield hit. After a pitching change, a single up the middle gave the Americans a walk-off win. James went 3-4 with two runs.

“Magical win,” Briese said. “It would have hurt (to lose that game). We would have been playing out of the losers’ bracket.”

Team USA cruised in the next two games. It crushed Guam 13-1 in the only game in which James did not bat. He did come off the bench to finish the game in center field.

One day later, James sparked a 15-4 romp over Puerto Rico. On the second pitch of the game, he slammed a homer to left.

“His growth and development in the last year really served him offensively – to the point where his bat was a real tool this year,” Briese said.

After being idle for a day, Team USA returned to action Aug. 31 against Japan. That’s when it hit a speed bump, losing 12-6.

But the next day against Panama, James rescued his team in the bottom of the seventh and Team USA staged its second walk-off win.

James’ golden moment came with his team trailing 5-4 with one out and nobody on. He blasted a homer to left to force extra innings, Team USA pushed across the clinching run in the eighth and James went 3-3 with three runs and two RBIs.

“That was a huge moment for us in the tournament,” Briese said. “I think that helped steady the emotions and the chemistry of the team. If we’d lost to Panama, we would have most likely been playing for the bronze. Once Coy hit that home run, it was like: ‘OK, we’re going to be fine.’”

“That’s one of the memorable moments so far in my life – down 5-4 in a must-win game if we want to keep our hopes up to make the gold medal game,” James aid. “I’m down 1-2 in the count and get a fastball high. Off the bat I knew it was gone. Running around the bases, nothing else felt better. We shut them down and walk it off – it was amazing.”

Team USA had no trouble with Chinese Taipei on Sept. 2, breezing 10-0 as James went 2-3 with two runs.

When Team USA met Cuba on Sept. 3, the good guys had to win to reach the championship game. It was a meaningless game for Cuba, which had already clinched a berth to the gold-medal game. Laser-focussed USA cruised 11-1 to set up a rematch with the Cubans for all the marbles.

“Cuba knew they didn’t have to win to get into the gold medal game, so they saved a couple of their main pitchers,” Briese said. “We had to win to get in, so we went out there with everything that we had.”

The showdown for the gold on Sept. 4 was a different story. Cuba trotted out three strong arms. Team USA took a 2-0 lead by scratching in the first two innings, but it would get pushed to the limit as Cuba responded with a three-run third.

It was 3-3 in the fifth when Team USA mounted the winning rally. Cuba made a pitching change after a leadoff single. The new pitcher walked James. A sac bunt moved the runners to second and third, and an intentional walk loaded the bases. Team USA scored on a fielder’s choice to go in front 4-3. It would hang on for dear life.

Team USA reliever Zane Burns retired the side in order in the sixth, and he struck out the first batter of the seventh before running into trouble. A single and two walks loaded the bases. Briese walked to the mound and summoned Ryan Harwood.

Harwood struck out back-to-back batters, sealing a riveting win and sending fans and players into delirium.

“I’ll be honest with you, I think the team really believed that we were going to win the gold medal,” Briese said. “I think they believed we were the most talented team there and it was just a matter of going out and performing on the field.”

James earned tournament MVP by ranking first in runs (15); tied for first in hits (12) and homers (two); second in slugging percentage (.880); third in average (.480); tied for third in RBIs (eight); fourth in on-base percentage (.588); and fifth in steals (four) and at-bats (25). Two players from Venezuela hit .500, but they both had fewer at-bats than James, who went 12 for 25, hit safely in six of eight games, drew six walks, struck out just three times and played error-free defense in center.

James is the epitome of even keel.

“He’s a cool kid,” Briese said. “He’s a calm customer. He never got too up or too down. When he was in the dugout, he would come sit by the coaches and hang out with us. He was awesome to talk to and fun to hang out with.”

“It’s going to take him somewhere special, I can tell you that,” Briese said. “After that tournament, I think he’ll have his choice of schools about where he wants to go. I think I know where he’ll end up, but he could go anywhere he wants.”