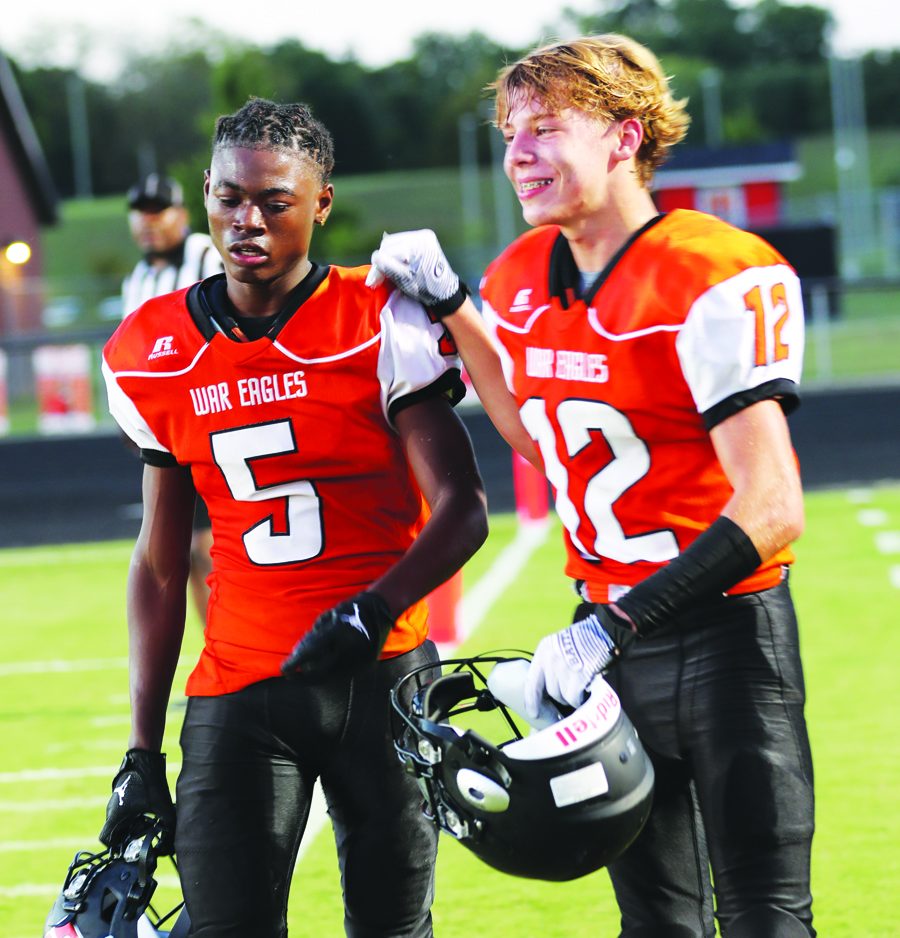 Leon Bradshaw’s long touchdown catches in the first two games were not flukes. This sophomore receiver can flat-out play, and he’s created the most buzz so far for the Davie JV football team, which has won two straight after a season-opening loss.

Bradshaw scored two more long touchdowns – one on a throw from Jamarius Pelote and the other on a kickoff return – to lead Davie to a thrilling 21-20 win over visiting North Davidson in the final nonconference game on Sept. 1.

“Leon Deon,” coach Perry Long said affectionately. “He’s tough. He’s a gamer. And he wants to be good. He wants to be that game-changer.”

After Davie punted on its first two possessions, it gained traction when it started its third offensive series from its 40. Archer Richardson moved the chains on a third-down run, Pelote hit Ethan Driver for 20 yards and Pelote converted a third-and-2 run to set up his 13-yard TD pass to Driver.

David Patton, the left-footed kicker who was one of the difference-makers, added the PAT to make it 7-0.

The Black Knights did the same thing. After two punts, they drove 40 yards in six plays to reach the end zone. The holder, though, mishandled the snap and Davie stayed in front, 7-6.

A few minutes later, Patton got off a nice 42-yard punt, only to see it returned 26 yards to the Davie 36. North took advantage of the short field. Landon Waller thought he had an interception at the Davie 4, but simultaneous possession was the call as North picked up 21 yards on the play. On third-and-goal, North’s QB swung a pass to the running back for a TD. The running back bowled through would-be tacklers on the two-point conversion to give North a 14-7 lead.

Bradshaw’s heroics included a catch on a third-and-12 play from Davie’s 25. He ran a go route. He stopped to look back at Pelote at the Davie 40. He took off again and caught the pass at the North 40. The defender was offbalance and Bradshaw glided home for a 75-yard TD. Patton’s kick tied the halftime score at 14.

It was a rollercoaster game in which Davie had to contend with a little bit of everything. North intercepted a pass, but Davie’s sideline wasn’t concerned because everyone saw a flag come out for pass interference against Bradshaw. But after officials huddled, the flag was waved off.

The Black Knights converted two third downs, then ran for 9 yards on fourth-and-4. On second-and-13, their QB rolled right and threw a bomb to the Davie 7. The receiver hauled it in and scored a 37-yard TD to cap a 12-play, 70-yard drive. The kick failed as Davie trailed 20-14. (That miss would loom large; Patton, meanwhile, would go 3 for 3 on PATs.)

The dynamic Bradshaw had an immediate answer. He left defenders grasping on an 84-yard kickoff return. A Black Knight appeared to make a horse-collar tackle attempt at the North 13, but it didn’t matter because Bradshaw refused to go down.

A penalty before the extra point forced Patton to try a 25-yard PAT. Two Knights burst through the line, but Driver executed the hold and Patton’s kick was true to give Davie the 21-20 lead.

North fumbled the ball on a fourth-and-4 run from the Davie 38, and lineman Nathaniel Jordan pounced on it.

Then Davie began moving the ball and milking the clock. A third-and-10 pass went to Bradshaw, who weaved through traffic for 17 yards. On third-and-2, Richardson barreled for 4 yards. Pelote got around the edge for 17 yards, and when a 15-yard penalty for a late hit was tacked on, Davie had the ball at the North 15.

On third down from the North 11, Pelote rolled right, eluded a sack at the 20, spun to the left and zipped an apparent TD pass to Patton. But Davie was whistled for a 19-yard holding to make it third-and-25, and it turned it over on downs at the 28.

That left the door open for North.

Two plays later, North went deep. A defensive back had a shot to pick it off, but he misjudged the ball and a Black Knight snatched it and was off to the races. He gained 40 yards to the Davie 32.

“There was a rollercoaster of emotions,” Nicholson said.

The game ended in about the wackiest way possible. North gained 5 yards on a pass play, and the guy got out of bounds, which was huge since North was out of timeouts. North threw to the end zone, but Elliot Gould was there to deny it. Davie kept the receiver in bounds on a 5-yard reception, but the running back swept left and made a cutback to gain 16 yards to the Davie 6.

The QB fumbled the snap and lost 3 yards, but on the next play, he spiked the ball to stop the clock at six seconds. North’s field goal unit trotted out for a dramatic ending. The 27-yard attempt was wide left to set off a wild celebration on the home side.

“Landon Waller was incredibly close to blocking it,” Nicholson said. “If it had been kicked the way he wanted instead of hooking it, I think Landon would have blocked it.”

A game like this could do wonders for the young War Eagles.

“This team is incredibly inexperienced,” Nicholson said. “They were jumping up and down. We always tell them to act like you’ve been there before, but a lot of these guys haven’t because we have so many freshmen. It was really good for those kids.”

“We’re starting to see improvements on defense and special teams,” he said. “We’re getting the right people in the right places. There’s no doubt we played better than we did the first two games. Billy is a good defensive lineman. He’s still learning the position; last year he played an interior position. When he learns how to throw his weight around a little bit, he could be a problem (for offenses) because he has natural power and he has great effort. With him and Connor Dixson coming off the edge, that’s a pretty good combination.”

Notes: Pelote was Davie’s top rusher with 55 yards, and he added five completions for 129 yards and two TDs. … Driver had three catches for 37 yards, and Bradshaw had two for 92. … Nicholson cited Gould, a freshman who is playing out of position. “He’s playing corner, but he’s a safety,” he said. “He was coming up and setting the post.”