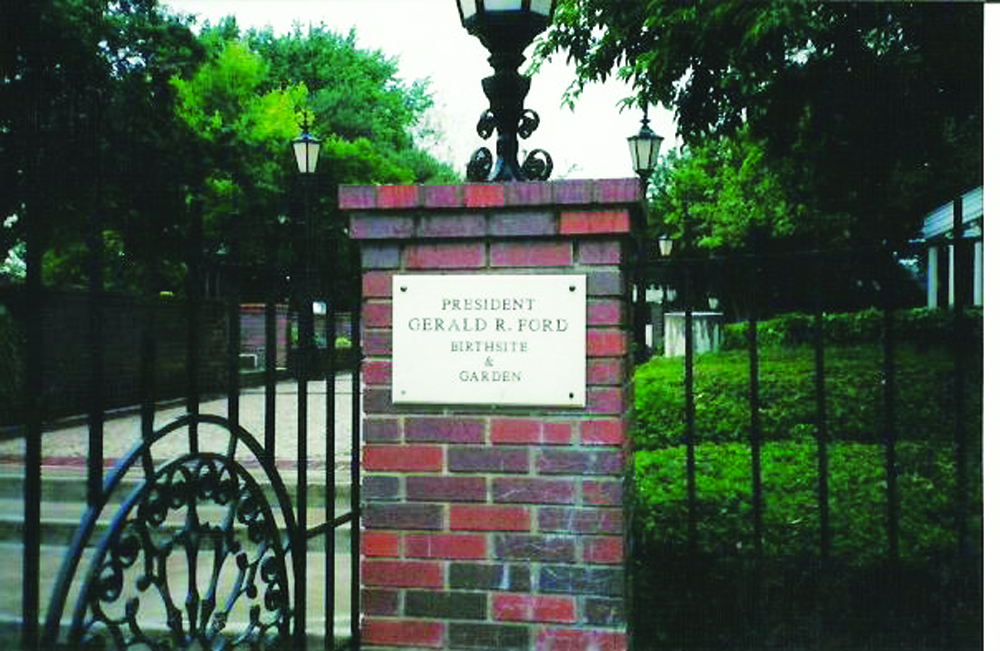 What President of the United States was born in Nebraska?

You may not know because although the 38th president was born there, he only lived in Nebraska for a few days. Shortly after he was born, his mother fled from her abusive husband taking her newborn baby with her.

The large house or mansion where the person who is now known as Gerald Ford was born burned a few years ago. If you visit Omaha, Neb. now, all that you will find that is connected to Gerald Ford is a bronze sign which says that 38th president was born in a mansion that was in an area which is now a park.  Also, in the same area, there is a small Ford Museum which has a number of interesting items which were connected to former President Ford.

When Gerald Ford’s mother fled, she went to live with a relative in Grand Rapid, Mich. After living in that city for about a year, she got a divorce from Leslie King, her first husband, and married Gerald Randolph Ford. Mr. Ford adopted her young son and renamed him Gerald Randolph Ford Jr.

Gerald had a happy childhood. He is quoted as saying, “My stepfather was a magnificent person and my mother was equally wonderful. So I couldn’t have written a better prescription for a superb family upbringing.”

Gerald did well in school and was an outstanding football player.  He attended the University of Michigan on an athletic scholarship. After graduation, he was offered a coaching job at Yale University. While coaching there he decided he wanted to go to the Yale Law School so he combined his coaching duties with attending classesl.  After he graduated from the Yale Law School and passed the bar, he went back to Grand Rapids and set up a law practice with a friend.

After the Japanese attacked Pearl Harbor on Dec. 7, 1941, many able-bodied young men in America volunteered to serve in the military. Gerald Ford was one of those. He joined the U.S. Navy and was sent to Chapel Hill, North Carolina, to serve as a physical training officer.  He trained naval recruits.  After being in Chapel Hill for about a year, Ford asked for an assignment in a combat zone. That he got. He was involved in many battles in the Pacific—received 10 battle stars.

After the war was over, Ford returned to Grand Rapids to continue his law practice. It was during that time that he met an attractive young lady who had studied dance in New York and who had appeared in some shows there. Betty Bloomer had decided to return to her hometown. During that time, Gerald Ford got interested in politics and decided to challenge the incumbent in Michigan’s Fifth District for his seat in the U.S. House of Representatives. Ford and the lovely young, Betty Bloomer, got married while he was involved in the campaign. They were busy campaigning during what was supposed to be their honeymoon.

Gerald Ford won that election. He won 12 more elections for that seat and served in the House for nearly 24 years.

Gerald R. Ford Jr. then took the oath of office in the East Room at the White House. The role in government which Mr. Ford always wanted was that of Speaker of the House of Representatives, but he ended up serving in the higher office of President. At first Mr. Ford received high ratings, but, then he granted a complete pardon to the former President Nixon. That action was not popular, and Mr. Ford’s approval ratings fell to a low level.  Mr. Ford ran in the next campaign against the Democratic candidate, Jimmy Carter, and was defeated.

After election, the Ford family left Washington after living there more than a quarter of a century. There are is no place in Washington that was connected to the Fords except the White House. To find such a place you will have to go to Ann Arbor, Mich. or Omaha, Neb.

After leaving Washington, the Fords moved to Rancho Mirage, Calif., and it was there that they lived for the rest of their lives.  Their home was on the 13th fairway of the Thunderbird Country Club. That home in Rancho Mirage is not open to the public and at one point was advertised for sale.

During Mr. Ford’s retirement years, he worked with others on the Gerald R. Ford Presidential Library and Museum which is located on the University of Michigan Campus in Ann Arbor. That library and museum contains materials about all phrases of the lives of Gerald R. Ford and his wife, Betty. The Ford Library is open five days a week and can be reached at 1-734-205-0555.

Through the many years that Mr. Ford was involved with his work in the government, his wife, Betty, was often left without much support to help her with the care of the four Ford children. She had chronic pain for which she took prescription medicine. She also tried to dull her pains with alcohol. After the Ford family left Washington, they planned an intervention to try to help the lady who by this time was an addict and who had been so important in the lives of all of them. Betty agreed that she had a problem, and she agreed to go for rehabilitation. The rehabilitation helped her so much that she decided to build a place to help others who had problems like those she had endured. She built the Betty Ford Center Drug Rehab in Rancho Mirage.  That center has been a tremendous success and has helped hundreds of people.  It is a great monument to a lady who didn’t give up.

Betty Ford lived about five years after the death of her husband, who died on Dec. 26, 2006, and. she is buried beside him at the Gerald R. Ford Museum in Ann Arbor.