Tennis team at 15 CPC wins in a row 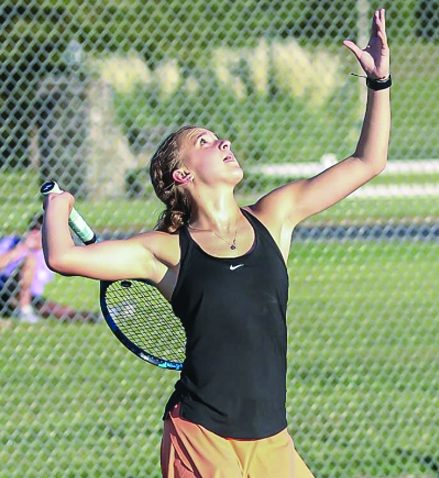 One week after beating Reynolds, Davie’s tennis team made another huge statement against visiting Reagan on Aug. 29. Davie leveled the Raiders 7-2. It was the biggest win over them since October of 2017.

“To be fair, Reagan was playing without their No. 1,” coach Collin Ferebee said. “She had an ankle injury. (With her in the lineup), I don’t think it would have been nearly as complete, but I feel like we would have won with how well we played.”

Quinn/Tru Koren and Aderhold/Gabby Thompson padded the margin in doubles as they won 8-4 and 8-2, respectively.

“In a match like this, you can give (player of the match) to anyone,” Ferebee said. “I gave it to Sarah West because she had that rough (0-2) start, so I was proud of her for not letting those first two matches get her down. She’s done really well (during a three-match winning streak).”

Davie’s fire-breathing top seeds – Newsome and Quinn – are both 5-0. They are two distinctly different players. While Quinn crushes winners, watching Newsome play is like watching a boa constrictor eat. She doesn’t blow opponents off the court, she slowly chokes them.

“It’s interesting,” Ferebee said. “If you watch Karlie and Elliot play, they’re both really good players, but they play completely opposite ways. Karlie has been hitting the ball really well this year. She’s been hitting hard – lots of pace. Elliot is the complete opposite. She actually puts very little pace on the ball, but she finds her spots and she’s going to keep hitting it and she just wears her opponents down. She doesn’t miss and she puts it where she wants it.”

Notes: Reagan fell to 2-2 overall and 1-1 in the Central Piedmont Conference. … Davie has a three-match winning streak against Reagan. … Aderhold, a freshman at No. 6, did not drop a game while whipping a junior.

The last regular-season loss was to Reagan in June of 2021.

“It was 6-3 to end that spring 2021 season,” Ferebee said. “I remember it because Leslie was out, and I think had Leslie not gotten an injury against East Forsyth that we could have beaten them. I really wanted that one, but I think that was the catalyst to us winning the next 19.”

The Spartans, who lost 8-1 to both West Forsyth and Reynolds, stumbled to 2-3 overall and 0-3 in the CPC. Davie beat Tabor the seventh consecutive time.

Seniors end the year with bingo