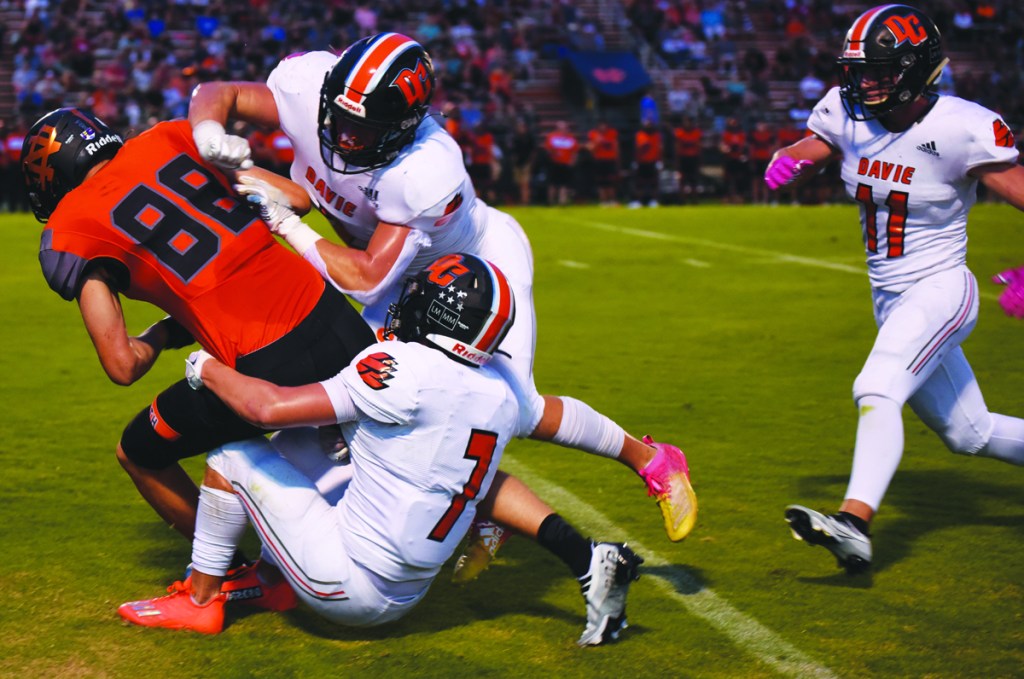 When in doubt, Davie’s football team had a big-time bailout – throw it to Brodie Smith and let him operate.

After only managing three catches and zero touchdowns in the first two games, Smith found his groove in front of a packed house Friday at North Davidson. The senior had one of the most impressive receiver games that you’ll see – 10 catches for 192 yards, with three tiebreaking TDs – to lead the War Eagles to a heart-pounding 28-21 victory.

It was a matchup of desperate 0-2 teams. While North remained winless with its second close loss, Davie headed into its bye week with a critical win.

“There’s no better feeling,” quarterback Ty Miller said. “We hated being 0-2 – that was an awful feeling – and we didn’t want to have that anymore.”

The biggest lead in the game was seven points. North’s defense forced a quick punt and drove 74 yards for the game’s first points. Gavin Hill connected with Reid Nisley for 39 yards, and seven plays later, running back Xavion Hayes broke a tackle in the backfield and scored from the 2.

Davie running back Markel Summers answered emphatically. On the next play from scrimmage, linemen Evan Copeland, Ryder Strickland, Kevin Lazaro and Evan Froelich created a hole up the middle and Summers sped 67 yards for a touchdown. Summers finished with 93 yards, but North limited him to 23 on 11 attempts after that explosive play.

“That’s what Markel is capable of – just a slight seam and he can take it to the house,” coach Tim Devericks said. “They keyed on him the rest of the game. They tried to shut Markel down and they did a good job of that.”

Late in the first quarter, Devericks went for it on fourth-and-5 from the North 46. Miller’s pass was on target, but it went in and out of the receiver’s hands.

Then a Davie defense that was way too generous in the first two games made its first big play of the game. Outside linebacker Ethan Silvey was playing zone coverage on third-and-8, Hill underthrew his man and Silvey intercepted. The senior returned it 19 yards to the North 36.

“That’s Ethan’s game – in space,” Devericks said. “I wanted him to score because I wanted people to see his speed. His athleticism is phenomenal.”

Seven plays later, Smith should have had a 16-yard TD, but he dropped a pass in the end zone. This tested his mental toughness. He would respond with three TDs in a span of 18 minutes.

“That’s going to happen in games,” Devericks said. “You’ve just got to have the mental toughness to respond. Part of that is being a senior.”

“That’s someone who bounces back,” Miller said. “He doesn’t ever stay down. He’s a leader.”

“The coaches have been preaching all week and all season just move on to the next play,” Smith said. “On that post route, it bounced off my shoulder pads. I should have caught it with my hands. If you hang your head about it, you’re going to get down on yourself, so I kept my head up and moved on.”

After the drop, Palmer Williams, the highly-touted kicker headed to Baylor, trotted out for his first field-goal attempt of the season, from 33 yards. But Nisley fired off the edge and blocked it.

Safety Connor Hood and Davie’s defense had the next big play. On third-and-5, backup running back Zimari Sean took a pitch-out and tried the right end. Hood upended him for a 2-yard loss.

The defense turned back six of North’s nine possessions in what it hopes is a new beginning after allowing 79 points to Mooresville/West Rowan.

“Connor filled the alley multiple times,” Devericks said of the 5-11, 135-pound sophomore. “For Connor’s size, he did a great job.”

Five minutes later, the defense was challenged to rise to the occasion – and it delivered. On third-and-1, Hayes was swarmed by Zack Banks, Brandon Wood and Jerred Alexander for minus-1. On fourth-and-2, Hill tucked the ball after he couldn’t find a receiver and Landon Barber and Alexander stopped him short of the marker.

“They played their tails off,” Devericks said of the defense. “We had two fourth-down stops in our territory.”

“We knew (Hayes) was going to be good, but we swarmed to the ball a lot better than we have been,” senior linebacker and leading tackler Justin Hayes said.

For the game, the Black Knights had more first downs and more yards than Davie, but Davie was the more disciplined team as North hurt itself with seven penalties for 77 yards. The first crucial penalty came late in the half. Miller’s pass to Summers on third-and-12 was going to be 6 yards short, but North was flagged for a late hit to move the ball to the North 13.

On fourth-and-inches from the 4, with 13 seconds on the clock, Devericks had a decision to make: Let Williams attempt a chip-shot field goal or go for seven. Devericks rolled the dice.

“I was a little hesitant on the field goal because we had one blocked and I wanted to get to halftime to shore that up,” he said. “And I thought we had a pass play.”

From the left slot, Smith ran a whip route. The defensive back bit inside and Smith caught the Miller pass for a 14-7 halftime lead.

“We’ve been working on that play all summer,” Miller said. “We know we can use it and it came up big. (Smith’s) routes are insane, so I trusted him and he was there.”

“I’m glad they trusted me,” Smith said. “We’ve been working on that play all week. I knew I could execute it. He was playing inside leverage. I had to slant and once he started biting on the slant, I planted my foot and went back out.”

The Black Knights brought the home fans to their feet on the sixth play of the second half. Receiver Alex Naylor, whose father Eric played shortstop for Davie baseball in the 1980s, ran a post route and turned his only catch into a 47-yard TD that made it 14-14.

Four plays later, Smith delivered a splash play of his own with a long catch-and-run. He took a screen pass a yard behind the line of scrimmage. Receiver Evan York took out cornerback Nisley. Receiver Aidan Froelich blocked cornerback Damani Chhom not once, but twice. Smith did the rest, sprinting 56 yards down the left sideline as Davie regained a 21-14 lead.

“We set it up by doing a lot of run plays (with Taye Maddox, who gained 5, 6 and 4 yards leading up to the screen),” Smith said.  “Aidan had a great block on the outside.”

“He’s quick and he’s also powerful,” Devericks said of Hayes. “We had him wrapped up a few times and he got loose.”

“He was a really good downhill runner,” outside linebacker Mason Shermer said. “We expected that out of him. We shut him down on the outside, but once he started running downhill, we had a few problems with that. But we were able to overcome that.”

Less than two minutes later, Miller went to Smith with a short pass, but Nisley cut in front and picked it off at the Davie 45. The Black Knights had a chance to seize control, but they self-destructed and a Matty Warner sack forced a punt.

On first down at the Davie 33, Hill took his eye off the snap and North lost 16 yards. On top of that, it was penalized 15 yards for unsportsmanlike conduct. The result was second-and-41. After Hayes burned Davie for 24 yards on a screen play, Hill looked downfield on third-and-long. Shermer blitzed and disrupted Hill’s rhythm. Hill got around Shermer with a pump fake, but he was leveled from behind by Warner.

“It was a Rams call,” Shermer said. “I read pass and I jumped. I shouldn’t have jumped; I should have had that sack. But thank the Lord my teammates were coming in to take him out.”

“I saw him, I chose my target and I shot,” said Warner, the cousin of former Davie stars Chris and Jack Reynolds. “It was a beautiful play by Mason.”

Davie’s offense faced third-and-8 from its 20 with less than seven minutes to go. That’s when Smith delivered his final electrifying play. Miller put it up near the Davie sideline and the defensive back cut underneath the corner route, the pass zipping past his outstretched hand. Smith squeezed it at the Davie 45 and was gone, the 80-yard score giving Davie the 28-21 lead.

“It’s a game of angles and I think it was one missed step,” Devericks said. “It was tight on the sideline. We had about a yard left to play with. But it was a good ball by Ty to the outside. Earlier in the game, he didn’t get it outside far enough, but he came back and made a good throw there.”

“We’ve been working on the Cover 2 – we’ve been watching the safeties – and Brodie made a move on him,” Miller said.

“In film, I knew they were running two high (safeties) on trips with just a safety on me,” Smith said. “I knew if I ran a post/corner and get him to bite on that post, I’d be open on the corner. He tried to undercut it and get a pick.”

“He’s kind of been shut out since a big play in the Mooresville game, but he never got down,” Devericks said.

“Oh, I love that dude,” Shermer said. “That’s my best friend. He’s one of the best in the conference and I have high hopes for him this season.”

Davie’s defense still had work to do. On seven consecutive handoffs to Hayes or Sean, North moved from its 20 to the Davie 35. On second-and-14, Hill went deep, but Hood was the closest player to the incomplete pass. Hayes picked up 10 yards on third down to make it a manageable fourth-and-4 at the Davie 25. With the game on the line, the defense came through in the clutch. On a run up the middle, Hayes was stacked up by Shermer, Alexander, Hood and Hayes.

One first down would kill the clock. On second-and-11, Miller lowered his shoulder to discard a defender and it took two guys to get him down as he picked up exactly 11.

Devericks was thrilled to see his team endure and walk out with a gritty win.

“Our guys were able to persevere,” the seventh-year head coach said.

“It feels better than life itself, to be honest with you,” Warner said.

Notes: Grayson Cayton, a sophomore d-lineman, injured his right knee in the opening minutes and had to be helped off the field. … Jalen Alexander, a 6-0, 290-pound junior transfer from Forbush, made his Davie debut. He was in the DL rotation. … Davie has three straight wins over North for the first time since taking seven in a row from 2002-08. … Miller factored into 271 of Davie’s 379 yards by hitting 15 of 21 passes for 209 yards and rushing for 62. … Landon King, who tore up his left knee on an end-zone INT against West Rowan, is done for the year. … This was the final nonconference game. Davie has a bye Friday before hosting Reynolds in the conference opener Sept. 16.