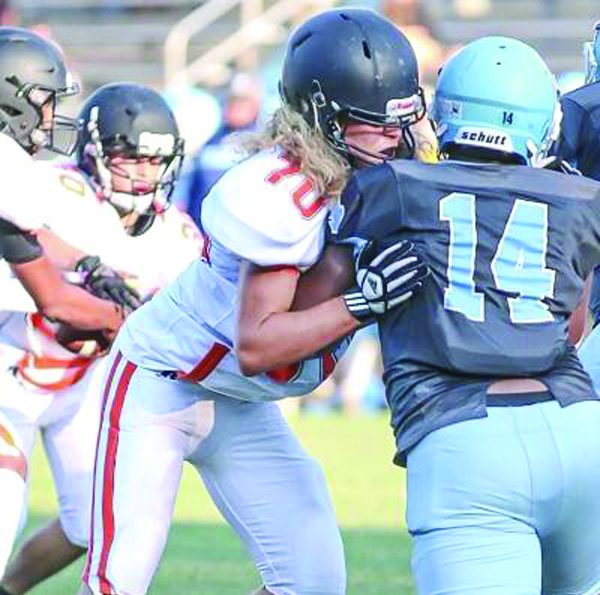 After experiencing baptism by fire and losing by 27 to Mooresville, Davie’s JV football team came back with a vengeance at West Rowan. It flipped the script and won 61-39 on Aug. 25.

“They’ve been working hard,” offensive coordinator Matt Gould said. “We’ve still got to clean up some things, but they definitely improved and executed a lot better. We are very freshman-heavy, so it’s a learning process for those guys. We don’t have a lot of sophomores playing JV to be the leaders, so they’re having to learn as they go.”

“Big-time improvement,” head coach Tim Devericks said. “We have a ton of freshmen playing and the first week we played a sophomore-heavy team. You can say it until you’re blue in the face, but until you really experience it … they knew what to expect (against West) and they were ready for it.”

Quarterback Jamarius Pelote and running back Archer Richardson took turns tormenting the Falcons. Pelote not only rushed for 113 yards and three touchdowns, he hit 9 of 14 passes for 189 and three TDs. To repeat: The freshman had a hand in six TDs.

Richardson also did his share of damage, rushing for 102 yards and three scores.

“Archer had a great night getting downhill,” Gould said. “Jamarius is a young guy, but he’s a good athlete. He made a bunch of plays with his feet, and he was able to make plays in the air. A couple of plays were just great scramble drills where he was able to elude the pressure and find an open receiver down the field.”

“Leon made a big touchdown catch in the first game, and he did the same thing again this game,” Gould said. “He was able to go catch a deep ball and outrun them. He’s been our leader as far as receivers go.

“Isaac stepped up. Some of it was the coverages they were playing and what they were giving us, and Isaac was the one who had the good matchup.”

The War Eagles led 14-12 when the first quarter ended. Then they pulled away and led 35-20 after an eventful first half. It was 41-27 after the third, and Davie put up 20 more in the fourth.

“Our guards improved from the week before, clearing out and letting Archer hit those lanes,” Gould said.

“During the week in practice, they were able to fix their angles, fix their techniques and correct some mistakes after seeing themselves on film (against Mooresville),” Devericks said of the OL. “They did a heck of a job.”

“Most of their touchdowns were just big plays,” he said. “We had multiple three-and-outs, four-and-outs and made them punt quite a few times.”

Devericks gave a thumbs-up to Nathaniel Jordan, a sophomore defensive lineman. “He had a really good game,” he said. “He’s really come on this year.”

Notes: David Patton converted 7 of 9 extra points. “The kicking game was still a work in progress (against Mooresville),” Gould said. “David has been working on it and he’s improved. He had deeper kickoffs. He’s primarily a receiver, but it’s something he’s kind of worked on on the side.” … West, which lost 24-22 to Salisbury, fell to 0-2.