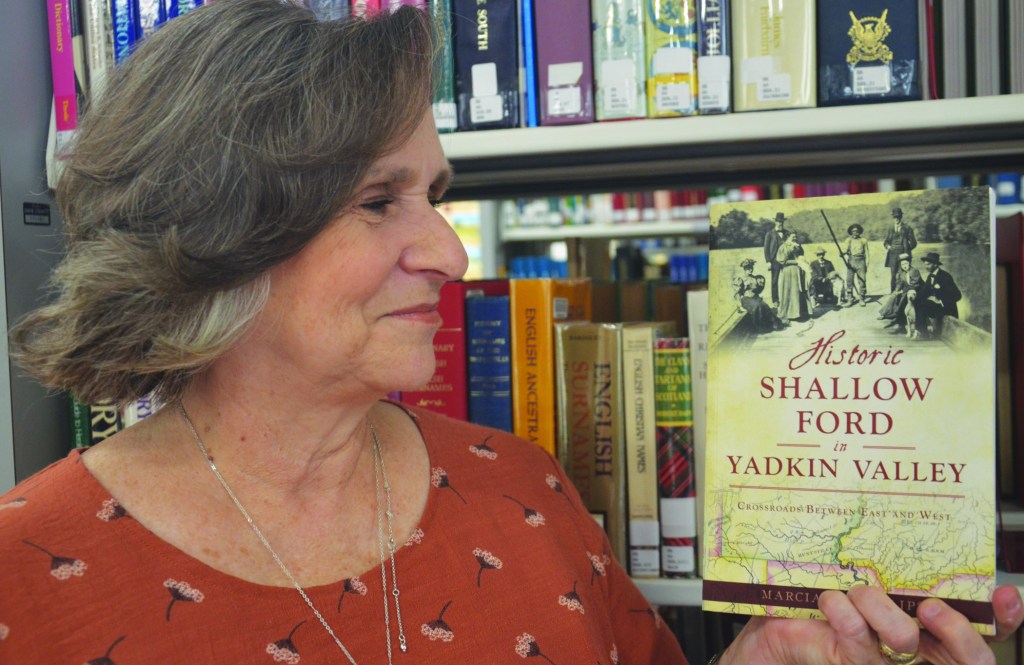 It’s just a shallow spot in the river, one with a somewhat solid, rocky bottom.

But what this little stretch of the Yadkin River that borders Forsyth and Yadkin counties – just around the bend from where it borders Davie – has seen in the past 250-plus years is pretty amazing.

It watched as Morgan Bryan crossed and became one of the first European settlers in what is now Davie County. It watched as Daniel Boone crossed with his family in his lifelong trek westward. It watched as General Cornwallis crossed in the Revolutionary War, and General Stoneman in the Civil War. It watched as family members from each war fought each other.

And most likely, last week, it watched as some kayakers made their way down the river.

In between, millions of footsteps and horsesteps, tens of thousands of wagon wheels have made their way across the river at Shallow Ford – the only ford this side of Salisbury in its heyday.

Marcia Phillips, the historian in the Martin-Wall History Room at the Davie County Public Library, started to think about this place called Shallow Ford.

In her new book, “Historic Shallow Ford in Yadkin Valley – Crossroads Between East and West,” she wrote: “Shallow Ford is a very organic place, built by no man and subject to the forces of nature more than any man or government. There is something intrinsically authentic about a place where water has cascaded over rock for thousands of years. Man has croseds it but has little affected or altered it, while it changed the course of history.”

The book will be released by The History Press on Sept. 5. It will be available for sale and for checkout at the library, and at usual online outlets. Stop by on a Monday, Tuesday or Thursday – and she may be there to sign your purchase.

Phillips first started looking for books and articles already written about Shallow Ford. She remembered it being mentioned many times, but could find nothing more than one man’s recollections that had been written about that stretch of river.

“Shallow Ford did not show up,” she said. “If local historians (like herself) have not shined the spotlight on that, then people are not going to come into this room (library history room) to research it.”

So she started researching. For Phillips, it really wasn’t work because of her love of history and preserving history. She got it honestly, her father was also a historian.

“It turned out to be a history of this whole area. It was the grand central station of folks going from east to west, from north to south.”

She estimated more than a million people crossed the river there. The number will never be known.

“To my knowledge, you never had to pay because it was a natural phenomenon.”

Phillips, who has what she calls the perfect retirement job as the part-time historian in the library – is no stranger to history. She also authored the book “Davie County Mavericks,” about Daniel Boone, Thomas Ferebee and Hinton Helper and Peter Ney.

She holds a master’s in education and taught history for 30 years, and went back to earn a master’s in historic preservation. She’s worked at the Henry Ford Museum and at Old Salem.

She moved to Davie County to live on family land with husband Bob in 2013. She remembers spending almost every summer at the home of her grandparents on McClamrock Road, Doc and Mae McClamrock. She remembers when the Davie County Public Library opened its current building in the mid-1960s. “I thought it was a cathedral. I remember a kid’s section, they had a series of books on historical figures.”

Her love of that library hasn’t wavered, especially of the history room, where she said she gleaned probably 80 percent of the research that went into the book about Shallow Ford.

And while she loves researching and writing about history, she also enjoys helping others in their quest to learn more about their past.

Phillips remembers looking out the window one day and seeing a “Rent Me” RV pull into the parking lot. It turns out there was a woman from Idaho, who years ago had stopped in for a quick visit to the library’s history room with her husband en route to the beach. After he died, it was on her bucket list to visit that room again – one that possibly held information about her ancestors.

Sure enough, it was that woman and her sister. They had been stopping to see sites along the way, but their ultimate destination from Idaho was the Martin-Wall History Room at the Davie County Public Library. Phillips found out all information she could provide them about their family, even pinpointing their original location on an old settler’s map.

The women were ecstatic. They left the library waving out the windows of that big RV, smiling and shouting “thank yous,”  headed for KFC. They were getting food to take for a picnic they planned to eat on their ancestor’s land.

Of all the sites they had seen between Idaho and Mocksville, it was the one they discovered in the history room here that made them the happiest.

“It’s a joy to work in here,” Phillips said. “There’s a parade of people dedicated to history. It’s a privilege to be the keeper of the treasures here.”