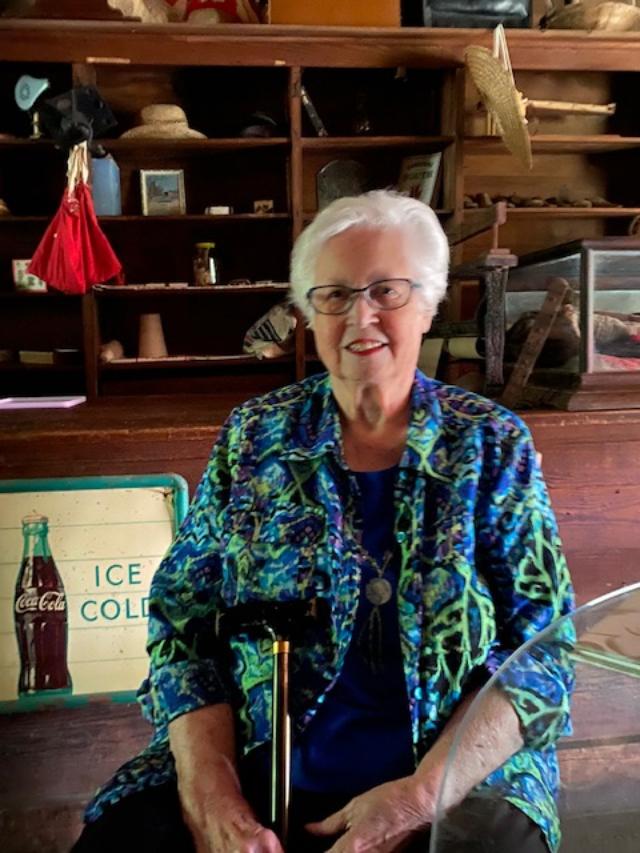 Eaton’s Baptist Church’s annual homecoming services were held on Sunday, Aug. 21, and included a covered dish meal.  Eaton’s Baptist will celebrate its 250th anniversary on the first Sunday in October.

My children – Frances Tutterow, Henry West, Susan Cujas and her husband Al – honored me on my 90th birthday with a lunch at the Frostland House in Cana, the place where I was born on a hot, dry August day. Dr. S.A. Harding was the doctor in attendance at my birth on Aug. 15, 1932, in an upstairs room at Frostland which must have been miserably hot because at that time there was no electricity in the house. (Electricity did not come to Cana until 1939.)

My birth announcement, which I recently found, said that I weighed 8 pounds and four ounces.  My parents were Lola Sofley Etchison, who grew up in the Redland community of Davie County and Everett Frost Etchison, who was born and raised at Cana.

Those who came to Frostland to honor me on my birthday in addition to my children were: all of my grandchildren except one grandson-in-law, Ryan Applegate, who was away on a trip. Those grandchildren joining in and helping with the celebration were:  Jason and Page Tutterow of Advance, Elizabeth and Joe Burchette of Advance, Amy Cujas Applegate of Charlotte, Missy Cujas of Lewisville, Oliver Cujas of Cana and step-grandchildren, Autumn Spillman Alverz and Alexander Spillman of Yadkinville.  Also joining were:  my great-grandchildren, Reese Tutterow of Advance and her friend, Jake DeLong, Harper Tutterow of Advance, Joseph Burchette and his almost 2-month old baby sister, Birdie Frances Burchette, whose only assignment for the day was to elicit oohs and aahs from the visitors.  Birdie did her job well.  That beautiful baby was named for her grandmother (Nana), Frances, but I, her great-grandmother, also claim some rights because her name is Betty Frances.

Other important guests  were: my only sister, Marty Etchison Babcock and her husband Bill of Cary, my only Etchison sister-in-law, Rachel Estes Etchison, of Siler City, and Rachel’s daughter, Patrice Etchison, of Cary.

The only sad note was the fact that my husband, Roland Henry West, who died on May 1, and my brother, John Etchison, who died in 2021, were not there.

Other enjoying the occasion were cousins: Dahlgren Etchison of Cana; Rachel Etchison Yancey and her husband, Wayne (Rusty) of Clemmons; the Yanceys’ daughter, Sarah Vance of East Bend; Ina, and  Donald Kamenz  and their son, Rydr  of Cana; and Buddy Eaton, who lives of Angell Road.

Another special guest was Jo Pope Shaw, the only person still living who was growing up in the village of Cana when I grew up there.  Other guests were:  Mindy Spillman of Yadkinville, Martha Boger Moorefield of Advance, and Clator Motinger of Mocksville, and my travel companions,   Jane and B.J. Testerman of Mooresville, Jenny and Tommy Turner of Mocksville, and Sarah and Ed Cartner of Mocksville.

• Kathy and Bob Ellis recently returned from a cruise from Seattle to Alaska.  They flew from Raleigh to Seattle, Wash., where they boarded a cruise ship to carry them up the Inside Passage to Alaska. They saw glaciers from the Tracy Fjord and stopped in Ketchikan, where they disembarked and enjoyed a crab feast. They traveled to Juneau, and to Icy Point Strait where they enjoyed seeing the beautiful Alaskan landscape via a gondola ride. During the cruise back to Seattle, they stopped at Victoria, Canada, where the gardens are said to be some of the most beautiful in the world.

Kelli and Nathan Hedrick, who recently moved to the Pino community, honored their daughter, Aubrey, on her 5th birthday with a party at their home on Saturday, Aug. 13. The theme was based on the movie, “The Greatest Showman,” Aubrey’s favorite. About 40 adults and children, including Aubrey’s grandparents, enjoyed the party.  The Hendricks plan to continue celebrating Aubrey’s fifth birthday with a trip to Florida and Disney. Aubrey is looking forward to going to kindergarten at Pinebrook School in a few days.