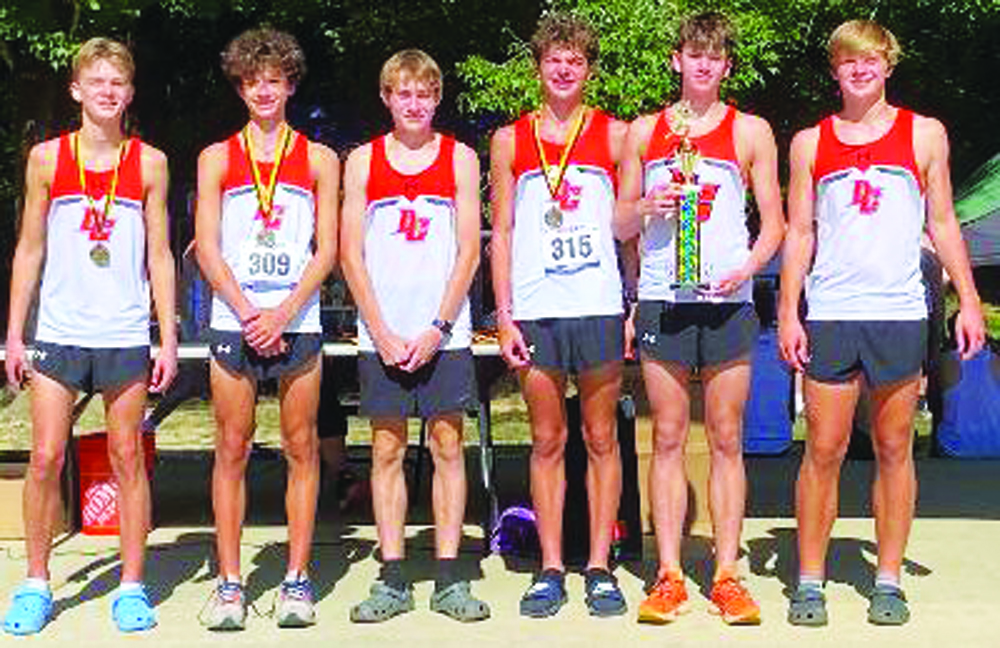 The Davie cross country team opened its season Saturday in the Providence Invitational at Charlotte’s McAlpine Park. A  total of 49 schools from both Carolinas, Tennessee and Georgia kicked off the season over the traditional 5k distance.

The War Eagle boys were among 26 teams in the invitational division, while the girls squared off against 19 schools in their race. The boys grabbed an impressive runner-up finish to a senior-dominated Lincoln Charter squad, while the girls managed a 10th-place showing.

Leading the way for Davie was the team’s lone senior, Owen Sulecki, who crossed the line in a personal-best time of 17:36, good for ninth place in a field of 168 finishers. Hot on his heels was a trio of Davie runners, including sophomore Thomas Essic, whose 14th place finishing time of 17:50 was also a personal record. Freshman Ethan Lakey claimed 17th in 18:00, while sophomore Tyler Hill placed 21st in 18:19. Rounding out the scoring for Davie was junior Will Allard, who took 67th in 19:53, and sophomore Aric Boles, who was 85th in 20:25.

A young Davie girls squad was next up as the humid temperature soared into the mid-80s. Freshman Lexi Marion overcame a twisted ankle early in the race to secure 16th place in 22:55. Junior Gracie Spicer placed 33rd in 23:54 and sophomore Raelyn Lankford was 61st in 25:49. The final three Davie runners were freshmen running their first ever 5k race. Riley McNeil was 74th in 27:05, Stella Frye 88th in 28:37 and Brianna Givens 95th in 31:18.

A total of 12 Davie boys raced in the combined JV race, which featured nearly 400 runners. Davie claimed 13th and was led by a pair of freshmen. Logan Zuleger paced the effort in 52nd place with a time of 20:23 and was followed by classmate Jackson Sulecki, whose time of 20:41 was good for 65th. Sophomore Chris Devicente knocked an incredible three minutes off of his best freshman year effort by placing 94th in 21:36. Next across the line was junior Slade Keaton in 22:01, followed by sophomores Hayden Key (22:16) and Noah Shore (22:31). Freshman Caswell Moore was next in 22:41. Rounding out the Davie contingent were sophomores Adam Brown (24:28) and Jake Hannah (25:44) and freshman Jake Patton in 27:37.

“Coach (Jeff) Jones and I were very pleased with the performances overall,” said coach Rob Raisbeck. “We have just over 30 runners on our roster and only one is a senior. We lost a bunch of seniors last year and we are in a complete rebuilding mode at the moment. For us to take second among 26 teams with such a young group was pretty impressive. Owen and Thomas ran very well and Ethan ran fearlessly. Tyler has been training very well and we expect big things from him this season. We are counting on Will and Aric to ease into their new roles on the varsity to give us what we need at the No. 5 spot.

“A couple of our other freshmen did a really nice job in the JV race. Logan has been out for several weeks with an illness and is just now returning to training. He and Jackson will likely battle it out to see who gets our final varsity spot at the end of the season, and I think they will really help us over the next few years.

“On the girls’ side, Lexi Marion is going to be a really good runner for us. She is having to shoulder the load as being our No. 1 and she had a really nice debut. Gracie and Raelyn give us two veterans and then we are relying on freshmen behind them.  Riley, Stella and Brianna are brand new to the sport and they all did very well for the first time out. We have a couple of upperclassmen who have just come out, and we did not race them Saturday but they will provide some depth as the season progresses.”

Next will be the Friday Night Lights meet Sept. 9. More than 90 schools will be on hand to race at Kernersville’s Ivey Redmon Park, the site of the November state championships.