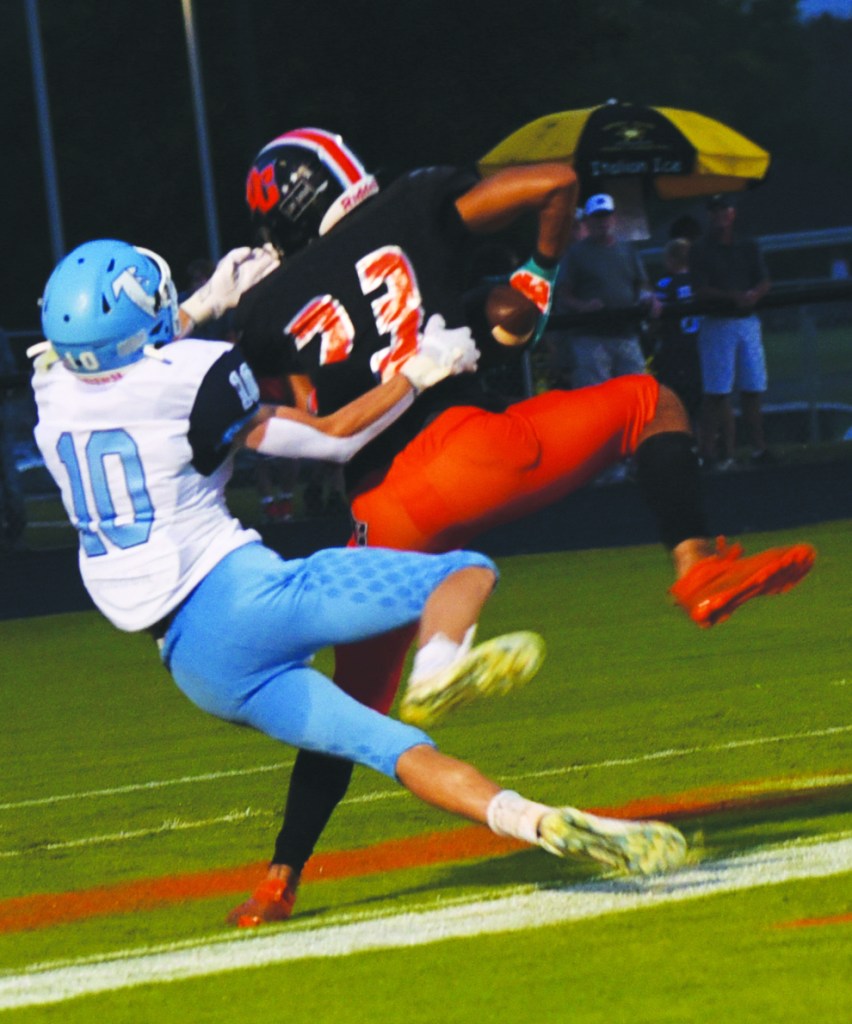 The game was lost, and then a win seemed well within Davie’s reach. Then it seemed lost again, then it seemed like the War Eagles would actually win, and then they lost.

Before a large crowd in the Davie home opener Friday, Davie and West Rowan stood toe to toe and slugged it out in a fight till the finish. Davie scored before the game was two minutes old. West scored 20 unanswered points in 5:11. Davie rallied for a halftime lead. West regained the lead, but Davie charged in front 34-29. But in the final three minutes, the Falcons broke Davie’s heart, 35-34.

“This one’s tough to swallow,” Davie coach Tim Devericks said after his team fell to 0-2. “I’m glad I can see the hurt on their faces because they fought. They fought through adversities. There were ups and downs and we battled injuries.”

While Davie tasted bitter defeat, the Falcons savored a thrilling 2-0 start and a measure of revenge after losing the past two meetings by a combined score of 91-37.

“That was a great game,” West coach Louis Kraft said. “That’s what you expect with West Rowan-Davie. That’s going to be a really good team this year. I know they’ve gotten off to an 0-2 start, but that’s a really good team.”

The War Eagles got first possession and made a 7-0 lead look easy. They went 54 yards in five plays, including quarterback Ty Miller’s 16-yard run, a 35-yard pass to Braddock Coleman and a 9-yard TD run up the middle by Markel Summers, who wasn’t touched.

The Falcons were entirely unfazed by that, scoring on their first three possessions by driving 75, 69 and 90 yards to take a 20-7 lead. (Eli Branham blocked the extra point after West’s first TD.) West kept burning Davie with the deep ball, with QB Lucas Graham completing six passes for 205 yards in the first quarter alone.

But Summers’ 4-yard run on fourth-and-1 at midfield and Miller’s 23-yard connection with Coleman changed the momentum for Davie. On the second fourth-and-1 play of the drive, Miller faked a handoff to Summers, got to the corner and lowered his head for 4 yards. Miller hit an open Summers, who had leaked out of the backfield, for an 11-yard TD pass on the next play.

Jerred Alexander had a tackle for no gain, Justin Hayes sacked Graham and West shanked a punt for 19 yards. Then Davie’s offense went back to work. Coleman made a 14-yard catch as he was falling down, Miller rambled for 23 yards and Evan York hauled in a 15-yard TD catch as Davie regained the lead at 21-20.

West threatened at the end of the half, but Graham’s pass in the end zone for Paxton Greene was intercepted by Landon King, who suffered what appeared to be a serious knee injury after making a dazzling pick. Davie took the one-point lead to the locker room.

“They’ve got a lot of great team speed,” Kraft said. “That running back (Summers) is a man. The quarterback’s going to be a really good player. They spaced us out.”

It didn’t take long for the second-half fireworks to begin. On fourth-and-9 from the Davie 41, West’s Evan Kennedy reeled in a 31-yard reception despite a double-team. Two plays later, workhorse running back Landon Jacobs capped an 80-yard drive from 9 yards out. West tried a trick play that failed on the PAT, leaving the score 26-21.

Davie’s offense didn’t flinch. On fourth-and-5 from the West 45, Miller couldn’t find a receiver, he escaped a disintegrating pocket and sped 15 yards around left end. After having first-and-goal at the 1, a penalty and a fumble backed Davie up to the 14. That’s when Miller and York hooked up for a breathtaking play.

A blitzing linebacker forced a desperate pass from Miller, who altered his delivery and threw it up between two defenders. York reached up and snatched it for a touchdown that helped Davie retake the lead at 28-26.

“That was an unbelievable play,” Devericks said. “We’ve got to get (York) to believe in himself that he can do that every play. Sometimes he doesn’t trust himself enough. We want him to grow into the physical traits that God has given him.”

The Falcons responded by marching from its 17 to the Davie 15. But Davie’s defense clamped down, denied the Falcons a TD and forced them to settle for three. Mason Shermer and Willie Purvis stuffed Jacobs behind the line. On third down, receiver Adrian Stockton ran a route to the front of the end zone and had inside position on Purvis – but Purvis reached around and broke it up. Juan Artega drilled a 28-yard field goal to put West on top, 29-28, with 11:10 remaining.

“I’m pretty sure (Stockton) had the ball in his hands, and Willie raked both hands and caused him to drop the ball,” Devericks said.

Davie needed an answer and kick returner Bryan Argueta supplied it with a 42-yard return to the West 39.

“Bryan’s fearless,” Devericks said. “He runs it up in there as hard as he possibly can.”

Miller, a sturdy commander, found York on the sideline for 16 yards, and then he decided to take off as he rumbled 19 yards. Miller scored from the 3. A two-point try failed, but Davie had a 34-29 lead.

“We’ve put in some QB reads, not just zone read,” Devericks said. “It’s one of those things where you’ve got to be smart and know when you’ve got to get physical in the middle. If you’re on the perimeter, take your yards, get out of bounds and live to play the next down.”

On the ensuring series, Graham and Jacobs converted a pair of fourth-and-ones, but the Davie defense stiffened and got a turnover on downs. Connor Hood stopped Kennedy after a 3-yard gain to set up third-and-5. Back-to-back incompletions gave Davie the ball with just 3:55 to go.

“Defensively, they gave us a little trouble switching from odd to even fronts,” Kraft said. “As a play-caller, it kind of tripped me up at times. They had a good scheme tonight, a really good plan.”

Davie was in great position to close the deal, but on third-and-4 from the Davie 48, Miller was picked off by a diving Jacob Perry, a former Ellis wrestler. Four plays later, it happened again. Graham went deep and hit a streaking Stockton for a 42-yard score with 2:18 on the clock.

Davie was down by one and it was second-and-19 at its 15. Evan against improbable odds, Miller and his boys didn’t lose their poise. Summers laid out for a 17-yard catch. Coleman caught a short pass, slipped a tackle and gained 18 yards to the West 33. Now Davie was in kicker Palmer Williams territory.

But then came the bad ending. Coleman fooled the cornerback with a stop-and-go move and made a twisting, tumbling catch against two defenders around the West 1 – only to be out of bounds. Then there was a 20-yard holding flag that put Davie in a third-and-29 hole at midfield. That was the ballgame.

The stars were aligned for West to win a shootout that featured five lead changes, 46 first downs, 961 yards of offense and 10 TDs (five by each team).

“(Jacobs is) a workhorse,” Kraft said. “Last year he played defensive end and we had to move him to running back out of necessity. He’s a load to tackle. (Graham) loves to make the big play when we ask him to. He knows he’s managing the game, managing the game and then he takes over when he needs to. (Kennedy, a sophomore) grew up. We knew he was going to be special when he was a freshman last year, and he grew up tonight.”

Miller and Co. did everything they could do to avoid the first 0-2 start since 2017. Miller passed for 170 yards, ran for 124 and factored into four TDs (three passing, one rushing). Summers churned out 93 rushing yards. York made big plays (two TDs).

And Coleman, one of the unknown soldiers as a 5-10 sophomore, stoked every heart by making five catches for 97 yards and resembling a little Jack Reynolds from 2018.

“We had several receivers that improved from last week,” Devericks said. “We didn’t have a very good game (at Mooresville) as a unit. Monday was very somber when they saw themselves on film, and they’re going to see their improvement on film on Monday.”

“This one stings,” Devericks said. “But look at Week One to now. We made huge strides. We did give up some plays that we probably shouldn’t have, but the improvement from last week is this week we were in position to win. Now we’ve just got to finish.”

• King (left knee) was replaced at cornerback by committee. Junior Romero played there some. Brodie Smith, a receiver, did some double duty. At times, Hood slid from safety to corner. It looked like the kind of injury that would sideline King for a good while. “He was in the same position last week,” Devericks said of King’s INT. “He was in position to make those plays, and one week later he was making those plays. He’s a kid who’s done everything we’ve asked him. You hate to see that, but I know he’ll bounce back and hopefully we can get him back in a few weeks.”