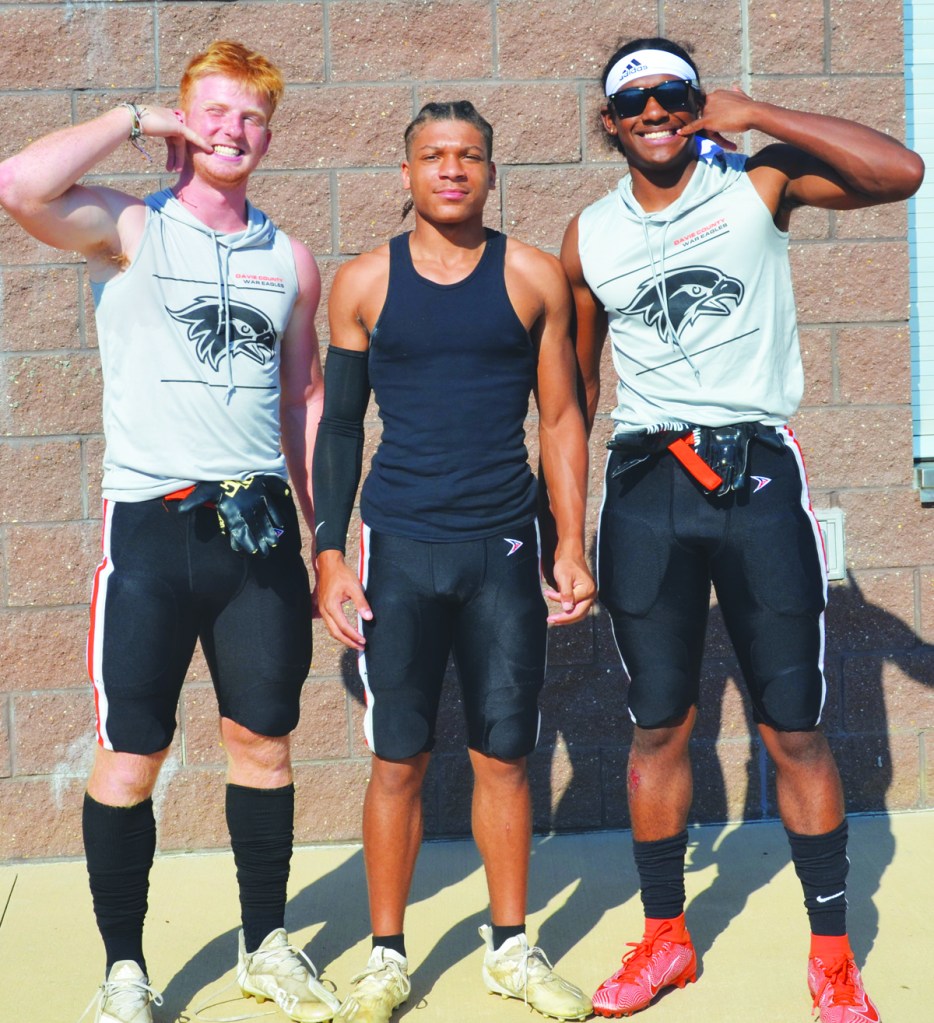 While that’s big shoes to fill, Markel Summers is a worthy successor to Davie’s running back legacy. In fact, Summers and quarterback Ty Miller are clearly poised to be an excellent one-two punch in the backfield.

“Last year he was always in Tate’s ear and asking Tate questions and learning the game from Tate,” offensive coordinator Matt Gould said.

Summers got a lot of game experience in 2021. In his varsity debut, he ran for 85 yards in a win over West Rowan. He rushed for 138 yards in a win over Reynolds, for 77 in a loss to East Forsyth and for 104 in a win over Parkland. He finished with 572 yards on 93 carries and scored eight touchdowns. The 6.1 yards-per-carry average ranks 22nd in the Davie record book.

In the offseason, Summers was a workout beast.

“He was in my weight training class in the second semester,” head coach Tim Devericks said. “Man, he knows this is his time coming up and he was going to make sure he did everything he could to get as strong and as quick and as fast as he could. He’s gone to multiple camps.”

The 5-11, 180-pounder is a mix of thunder and lightning, meaning he is physical enough to run through tackles and fast enough to blow by defenders.

“He’s a really physical runner,” Devericks said. “And he can take angles away and outrun you.”

“He’s a playmaker,” Gould said. “He’s one of the fastest guys on the team. He’s got game-breaking speed and he’ll make a huge run when a crease opens up. He’s definitely prepared coming into this year.”

There’s some intrigue into what to expect from Summers’ backup. It looks like Davie has unearthed a gem in junior Taye Maddox, who decided to return to football after not playing the past two years.

“COVID is kind of what got him,” Devericks said. “He came up as a freshman – that’s when we had like 20 people working out in pods during the summer – but he ended up having a medical procedure done. We played that spring (of 2021) and we couldn’t get him back by the spring. Last year he wasn’t able to play. With help from people from our school, caring for kids and trying to steer them in the right direction, he started hanging out with some of the football guys. I’m so proud of him. Since we started this summer, he didn’t hardly miss a day. If he did have to miss, he’d call me. You love to see a young man turn a corner and make great decisions and know what’s good for them.”

Maddox gives the offense an electric weapon. This 5-6, 140-pounder is so quick he can dodge the rain.

“We’re real excited about him,” Gould said. “He’s really stepped up this summer. He can definitely spell Markel and be a big-play threat. We envision him being kind of like Markel was last year behind Tate. We can put him in and be just fine. If we can get him the ball out in space, he can take it to the house just as well as anybody. He only weighs 140, but he’s sturdy for his size. They’re going to have to try to pull his flag to get to him.”

“Holy smokes,” Devericks said when asked about Maddox’s speed. “When he’s running, sometimes he might not know when the brakes are coming on and you better get out of the way. We haven’t had a guy with that kind of speed in quite a while. His skill level is phenomenal.”