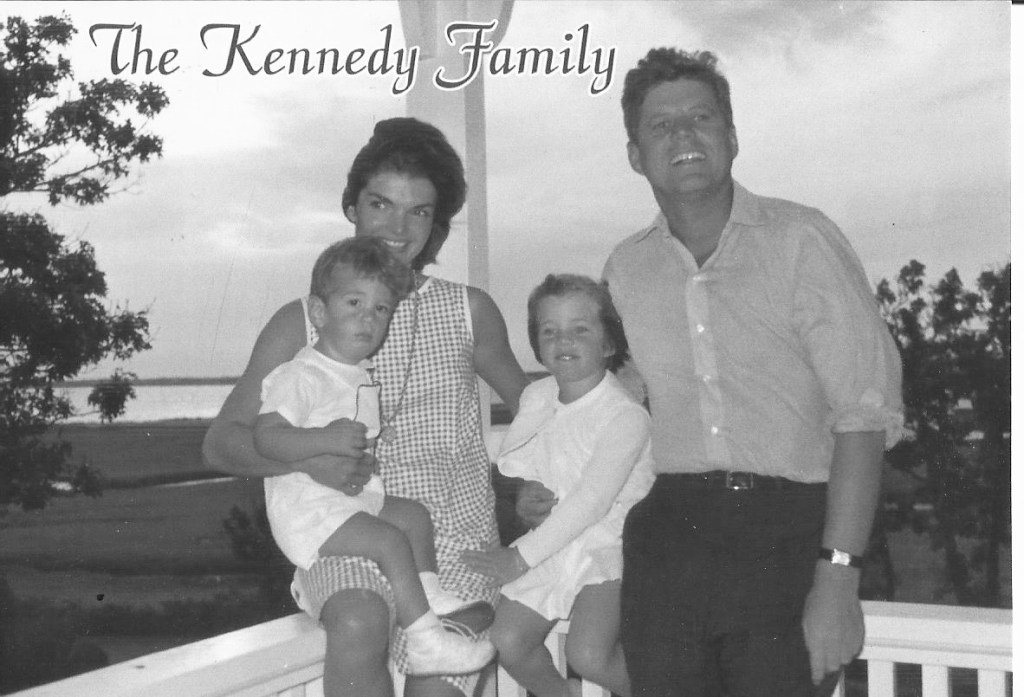 When President Eisenhower was completing his second term, John Fitzgerald Kennedy was waiting in the wings, hoping that he would be chosen as the Democratic candidate for president.

Richarda Nixon was hoping to become the Republican candidate.

Each man was chosen as his parties’ candidate, and the race was on.  Quite a race it was. The whole Kennedy family joined the second Kennedy son in campaigning.  John Kennedy’s mother met with small groups and entertained at teas and so did three of his sisters. His two brothers, Bobby and Ted, went on the campaign trail and spoke to large groups all over the country.

John Fitzgerald Kennedy won the election in 1960 and became the 35th President of the United States.

John Fitzgerald Kennedy was born in Brookline, Massachusetts, on May 29, 1917.  The large Kennedy family later moved to Bronxville, New York.  Mr. Kennedy’s father was quite wealthy so he also bought a large house in Hyannis Port, Massachusetts which is on Cape Cod.  The Kennedy family still owns that property, and it is not open to the public.

The Kennedy house in Brookline, Mass. is usually open to the public, but it is closed through 2022 for renovation and is scheduled to reopen in the spring of 2023. For more information about the Kennedy Birthplace, call the National Park Service which administers the property aat 617-566-7937.

The Brookline Beale Street house is a large three-story house on a quiet street, which was probably a fine place to raise a large family. One can imagine the Kennedy boys playing ball, riding bicycles, and maybe even enjoying a game of touch football in the street.  The boys would have been most likely have been joined by their sisters because all of the Kennedy children seemed to enjoy physical activity.

The Kennedy family, particularly Jack’s father, wanted one of his sons to be President. He began to groom his first son, Joe Jr., for that role, but Joe got killed when the airplane which he was piloting exploded.

Mr. Kennedy then turned his attention to Jack, his second son, who graduated from Harvard University. After he graduated from Harvard, Jack joined the U.S. Navy. He became the commander of PT 109, which was split wide open by an enemy destroyer.  Kennedy swam about three miles pulling any injured sailor along with him to an island. Both the men survived, but Jack Kennedy always suffered from the injuries.

John F. Kennedy (Jack) became interested in politics, which no doubt pleased his father. First he sought and won a seat in the U.S. House of Representatives. He moved on up and won one of Massachusetts’ Senate seats.  Kennedy served seven years in the Senate before he ran for President.

John Kennedy was a popular young president, and he was able to make good on a number of his promises. In surveys of presidential historians, Kennedy is ranked No. 8.  There is no way to know how he would have been ranked if he had lived to complete his four-year term. After he had been in office for about 1,000 days, he and his lovely wife, Jacqueline, who he married in 1953, went to Dallas, Texas. Kennedy’s advisors tried to get him not to go on that trip because they said the atmosphere was toxic in Texas, but the president was determined to go.  He and Jacqueline (called Jackie) went because Jack wanted to shore up his support there. As they were riding in an open convertible, a shot rang out and the president fell over in his wife’s lap. The driver realized what was happening, and he headed at top speed to a hospital. The President of the United States, John F. Kennedy, died at 12:30 p.m. CST on Nov. 22, 1963. Vice President Lyndon Johnson was sworn in as the 36th President later that night aboard Air Force One in the presence of his wife, Lady Bird, and Jacqueline Kennedy .

My book, “Glimpses Presidents of the United States and Presidential Places,” tells the story of the week following President Kennedy’s assassination.

“When Air Force One arrived in Washington, Mr. Kennedy’s body was taken to the Naval Hospital at Bethesda, Md., for an autopsy before it was taken to the White House. After it arrived at the White House, Mr. Kennedy’s casket was placed in the East Room just as President Lincoln’s was almost 100 years earlier.  After lying in state in the East Room for 24 hours attended by Army Special Forces (Green Berets) who were hurriedly brought to Washington from Fort Bragg, Mr. Kennedy’s body was carried to the Capitol on a horse-drawn caisson. The only sounds that could be heard as the caisson moved along Pennsylvania Avenue were the sound of the horses’ hooves, including those of the riderless horse, Black Jack, hitting the pavement and the sound of muffled drums. Thousands of people lined the route to the Capitol, many with tears.  Mr. Kennedy’s body lay in state for 24 hours in the Capitol Rotunda, and, during that time, 250,000 people passed by  to show their respect. The next day the body was again placed on the caisson and carried to the portico at the White House where Mrs. Kennedy joined the procession. She, along with the President‘s brothers, Bobby and Ted, and President Johnson, his wife and daughters walked behind the caisson as the procession moved to St. Matthew’s Cathedral.  A total of 220 foreign dignitaries were among the mourners. As the casket was carried down the steps of St. Matthews after the funeral, the President’s 3-year-old son, John, saluted—an image that brought the nation to tears. The final trip for John F. Kennedy was again made on the horse-drawn caisson as his body was carried to Arlington National Cemetery for burial. After the ceremony at Arlington, Mrs. Kennedy lit an eternal flame on the grave …”

There are two sites beside the Kennedy Birthplace that can be visited by the public.

They are his grave in Arlington National Cemetery and the Kennedy Library on Boston Harbor. Putting the Kennedy Library seems so appropriate because Jack Kennedy loved the water. That library is a large building, which President Kennedy’s wife, Jacqueline, helped plan. It not only pays tribute to Mr. Kennedy, but also includes much information about the history of the era in which he lived. The Kennedy Presidential Library stands today as a tribute to a man who many Americans felt died much too young.

That library is about 800 miles from Mocksville, about 10 miles from the Kennedy Library in Boston to the Kennedy Birthplace in Brookline, Mass., so it is a long trip for Mocksvillians to visit those sights connected to Mr. Kennedy.   It is only 357.5 miles to the Arlington Cemetery where President John F. Kennedy was buried and where the eternal flame continues to burn on his grave.

There is one other president, William Howard Taft, buried in the Arlington National Cemetery; so it is possible to visit two presidential sites.