O-line is big and agile 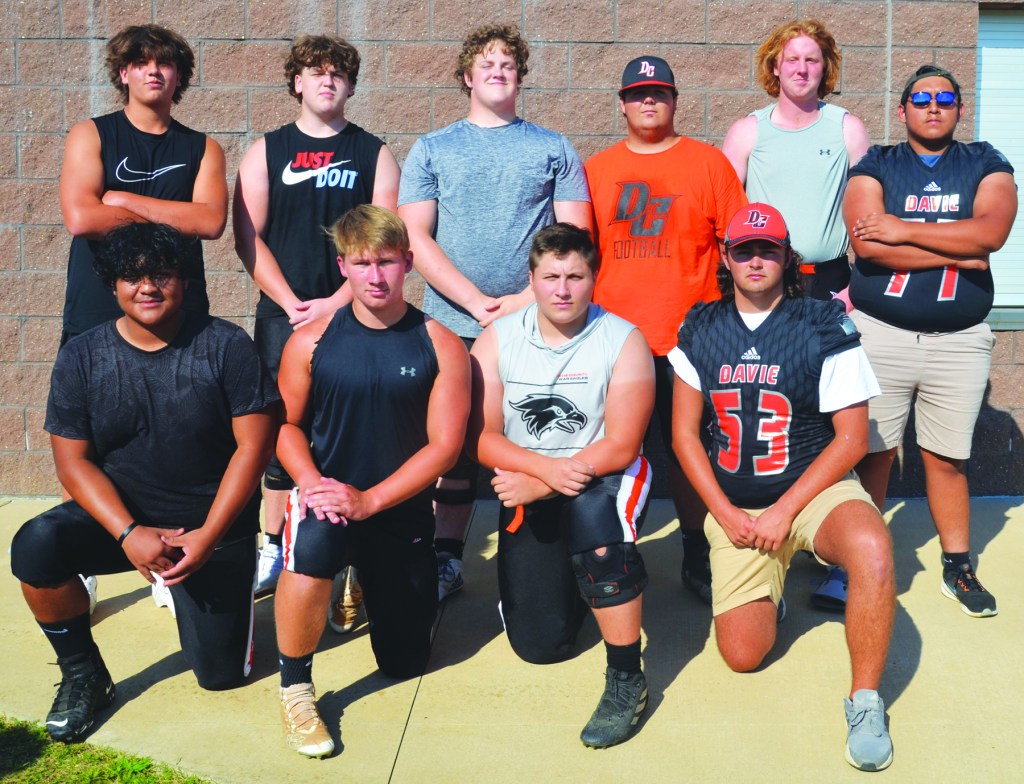 Davie’s offense has dangerous weapons in the backfield and out wide. If the offensive line comes together, watch out. The War Eagles averaged 35, 41 and 40 points the past three seasons, and the 2022 unit could be another formidable attack.

But the foundation of any offense begins up front. That’s where Davie is expected to start one senior, two juniors and two sophomores. Yes, that’s a young offensive line, but that o-line has quite a bit of varsity experience and it provided optimism during the offseason and early on in practice.

“I like where we’re at,” offensive coordinator Matt Gould said. “We’re excited about the group we have up front and skill-wise. It looks promising.”

“They have put in a lot of work during the spring and summer, trying to gel together,” head coach Tim Devericks said of the OL.

The lone senior among five projected starters is Charlie Frye (6-0, 210), who manned center last year but has moved to right tackle.

“We want to be athletic at the tackles,” Gould said. “Charlie is always reliable.”

Although Frye’s the smallest of the five first-teamers, he oozes intensity and he never, ever takes a play off.

“Charlie is a multi-sport athlete (along with wrestling) who can use leverage,” Devericks said. “He has a tenacious attitude. He’s always willing to compete.”

There are other qualities that distinguish Frye. Players like him are ones that every team wants on its roster.

“I can say: ‘Hey Charlie, take the group. I want you to work on this because I’ve got to go take care of that,’” Devericks said. “You know it’s going to get done at a high intensity and he’s going to hold his teammates accountable. It’s really awesome to have somebody like that that’s had experience at the varsity level and in big games.”

Two others come in with varsity starting experience: Evan Froelich, a 6-3, 235-pound junior at right guard, and Jackson Powers, a 6-5, 235-pound sophomore at left tackle. Devericks says both can consistently get the job done.

“Evan took off one year (as a freshman),” Devericks said. “I think he really missed the game and came back to it – and obviously we’re glad he did. You talk about a kid who hasn’t missed a thing. Last year he was kind of thrown to the fire, but he took it, ran with it and that experience is invaluable. He’s learning two positions (guard and tackle) to help the offensive line.

“Jackson is growing into his body. He never missed a day and he’s willing to do double duty with basketball and football, which has been really impressive. Because he’s so athletic, he’s able to pick up multiple fronts and stunts and blitzes and different angles, and he has the foot quickness from basketball that helps him there.”

The center, Evan Copeland, was sidelined for the entire football/wrestling seasons in 2021-22 because of a shoulder injury that required surgery. His return is a really big deal. The junior’s an athletic specimen at 6-3, 310.

“We got bigger right away because Evan is back,” Gould said.

“Getting Evan back obviously helps the situation,” Devericks said. “It’s never easy for a kid to go through the rehab, finally get cleared to lift weights and work you way back into it. He has been chomping at the bit. He’s a big man. I’ll tell you this: We had to dig deep in our shoulder pads collection to find one that fit him because he’s got such a wide back.”

The left guard, sophomore Ryder Strickland (5-9, 260), was thrown to the wolves last winter when he wrestled heavyweight as a freshman. He kept getting up, made steady improvement and never backed down. You root for a guy like that. And like Frye, he plays with an edge.

“He’s made huge strides,” Gould said. “He’s gotten a lot stronger. He worked real hard in the weight room. We weren’t sure if he was going to be a varsity player, but he stepped up in the spring and summer.”

“He’s similar to Charlie with that bulldog mentality,” Devericks said. “It’s like: ‘Yeah, I know I’m not 6-5, but I’ve got a strong base and I’m going to work and work and work and not miss a workout.’”

“He was in our wildcat packages last year,” Gould said. “When we put in the sixth OL, he was able to step up. He’ll be able to rotate in at guard and again he can be that extra lineman if we put in any heavy packages.”

“We have some depth,” Gould said. “Lazaro can play guard or center.”