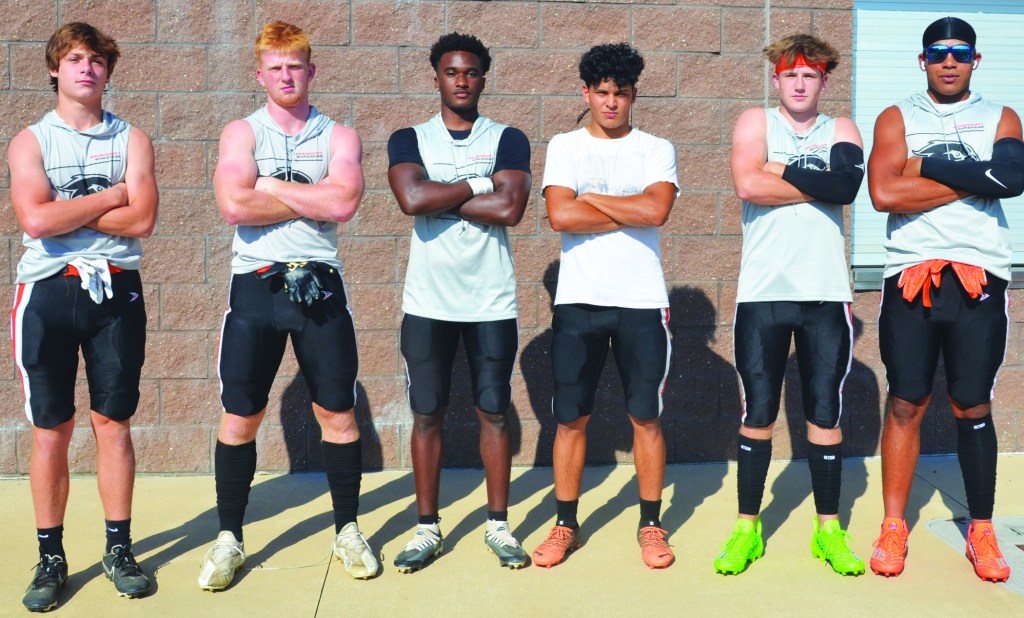 At wide receiver, Davie lost significant production to graduation. Za’haree Maddox, Zymere Hudson and Tate Carney – three of the top seven of all time in terms of receptions – are gone.

Don’t fret, Davie fans. The cupboard is not bare.

From quarterback to running back to receiver, Davie’s offense has the right ingredients to create a delicious recipe. That recipe includes senior receiver Brodie Smith.

As a varsity sophomore, Smith was a backup running back to Carney. In spot duty he ran 40 times for 268 yards, an outstanding 6.7 yards-per-carry average. As a junior, he played receiver in the shadows of Maddox/Hudson, but he made the most of his opportunities and produced 40 catches for 566 yards and five touchdowns.

After seeing glimpses of his talent for two seasons, Smith (6-0, 185) enters his senior season as a budding star.  “Brodie has been waiting for this,” offensive coordinator Matt Gould said. “Last year he wasn’t the featured guy because we had Zymere and Za’haree. Brodie is ready to be the featured guy. He’s been making plays all spring and summer. He’s also stepped up into the leadership role. Brodie and Ty (Miller, the quarterback) are our captains and they are true leaders. They make sure everybody is doing right and making sure we’re up to our standards.”

“Brodie is a mix of some guys from the last couple of years,” head coach Tim Devericks said. “He’s got (Jack Reynolds’) shiftiness, but he’s also got Zymere’s hands and playmaker ability. We’re also not afraid to put him in the backfield and do some things there.”

Last year as a sophomore, Evan York played one JV game before getting pulled up to varsity. After contributing 10 catches in 2021, he stands poised to be one of the main guys this fall. At 6-0 and 200 pounds, he’s a tremendous talent with all the physical attributes.

“Evan is still growing,” Devericks said. “When you look at his physical abilities, everyone would be like: ‘Yeah, we want him on our team.’”

“We’re looking for big things from him,” Gould said. “He’s a big, physical guy. He’s not scared to go over the middle and make contested catches. He’s got the size that every college is looking for. He would go with Ty for their own workouts in the morning before school back in the spring. He’s gotten a lot bigger and stronger, and you can definitely tell he’s physically there.”

As a junior, Aidan Froelich averaged a whopping 23.8 yards per catch. While he only had five catches, he’s ready for a bigger role as a senior.

“He didn’t have a lot of catches last year, but he made some big ones,” Gould said. “There was one game where he had two or three third-down conversions. He’s a senior and he’s ready to step up.”

“Aidan plays a spot that is vitally important,” Devericks said. “He might not be the first target all the time, but if they’re trying to take away something else, Aidan’s spot is the one that will be open. You have to be a selfless person to play that. The thing I love about Aidan, he’s become a leader. He’s a naturally quiet kid, but I’ve heard him talk more this summer than I probably have the last three years combined.”

Bryan Argueta scarcely played as a junior, but keep an eye on this deep-threat blazer.

“He played the same position as Za’haree, so it was tough for him to get on the field,” Gould said. “He’s probably in the top three for fastest guys on the team, so we’re looking for him to take the top off the defense. He’s one of the hardest workers on the team. We had a water break the other day and he was over there by himself working releases. He wasn’t going to take a break; he wanted to keep working.”

“He’s always had the speed,” Devericks said. “He has bided his time and now is his time to shine.”

The depth here should be solid. Sophomore Braddock Coleman flashed as a JV freshman, making four catches for 84 yards in a win over Reynolds and turning in a seven-catch, 212-yard explosion in a 49-42 loss to Reagan.

“We’re expecting Braddock to step up,” Gould said. “He can play multiple positions. If somebody needs a break, he can step up at multiple spots. He’s stepped his game up this offseason.”

“He made some big catches on JV,” Gould said. “He can fill in if we need him.”

One of the defense’s cornerstones, senior Willie Purvis, is doubling up at receiver. “He’s been getting a few reps to give Argueta a blow,” Gould said. “He’ll be our only two-way guy.”