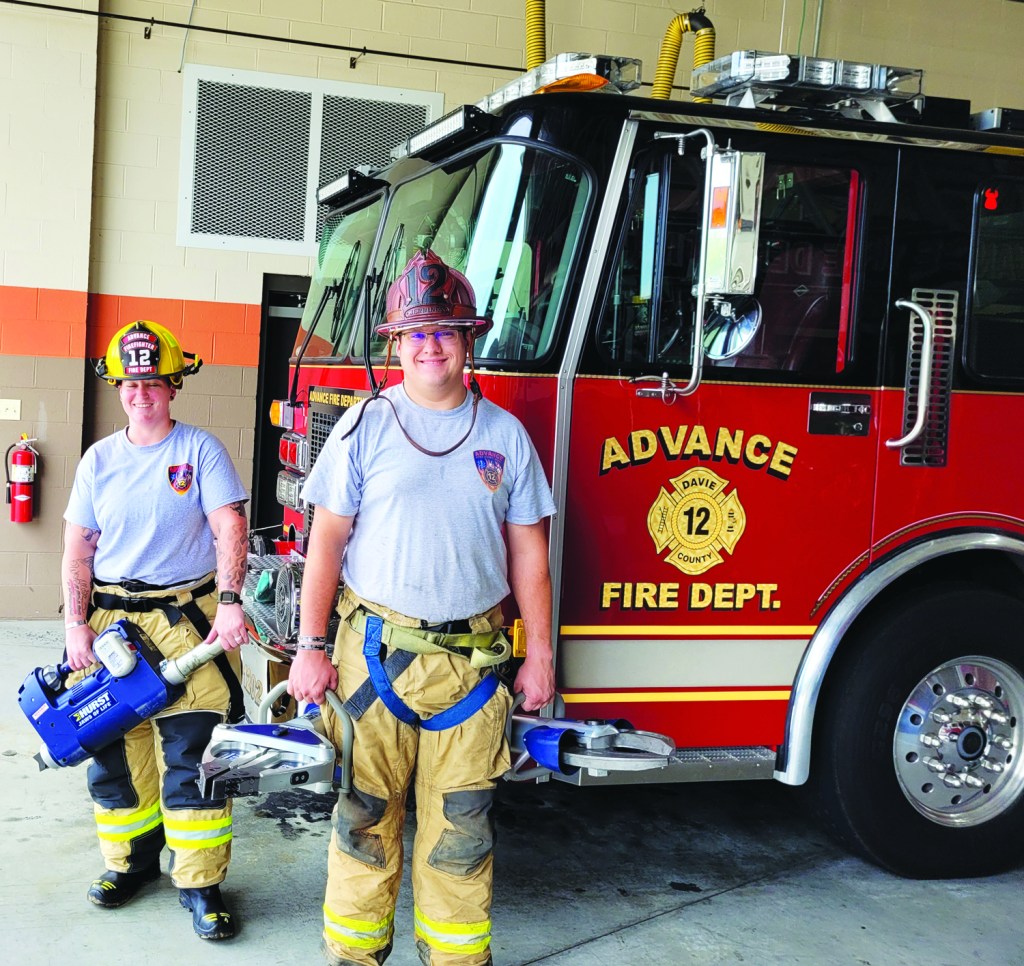 ADVANCE – The goal of the Advance Fire Department is to be ready to cope with any emergency that might strike in eastern Davie County.

“We now have the people, the training and the equipment to reach that goal,” said Fire Chief Rodney Miller.

Joel Faircloth, executive director of the N.C. Association of Rescue and EMS, agrees.

In a letter, he congratulated the department for “meeting high professional standards” in heavy rescue, high angle rescue and medical response.

Faircloth wrote: “Your department, personnel and the citizens of your response area should be proud of this high achievement.”

It took years of initial certification and continuing education to reach this level of training.

Getting the proper equipment was another matter.

For years the department depended on Rescue 12, a Ford 550 mini-pumper which carried 300 gallons of water in addition broad array of rescue equipment. It was used for small contained fires, vehicle fires, brush fires, hazmat incidents and medical calls.

Rescue 12 served the residents of the community well even if its limitations were obvious to those who used it, Miller said. Improvement in rescue capabilities was needed.

Opportunity struck in 2018 when a fire department in Pennsylvania decided to replace its powerful rescue engine which had 36,000 miles. The Advance Fire Department scooped it up for $50,000. The cost of a new rescue engine would approach a million dollars.

The department had done this before when it acquired Ladder 12 with its 85-foot ladder from a department in New Jersey for $25,000. Ladder 12 is insured for the million dollars it would cost to replace.

What would become Rescue Engine 1202 would be refitted and re-equipped and the department’s firefighters would be trained to use it and the tools and equipment it carries.

Rescue Engine 1202 replaces Rescue 12 which was placed in reserve.

The difference between the two is startling, Miller said.

But Rescue 1202 has another vital function; it can be used as a water point. Utilizing its powerful pump and 5-inch supply hose, it can fill up tankers faster than the built-in pumps.

“This is important in areas not served by hydrants where water must be trucked in to fight fires,” Miller said. “Minutes count when a fire can double in size every five minutes.We can do it all now.”

He said the equipment and training has paid another dividend to the residents who voted to create a separate Advance area fire district.

“Our fire insurance rate has been lowered to a 4 for structures within five miles of the fire house,” he said. The chief suggested residents check with their insurance agent to see if they are entitled to a reduction in homeowner’s insurance.

Two other fire departments in Davie County, Mocksville and Smith Grove, are trained and equipped to handle these kinds of emergencies.

Because of mutual aid agreements, any fire department in Davie County and beyond can call on any of these three departments for help.

“It would be quick to come. Time is of the essence in any emergency,” Miller said.