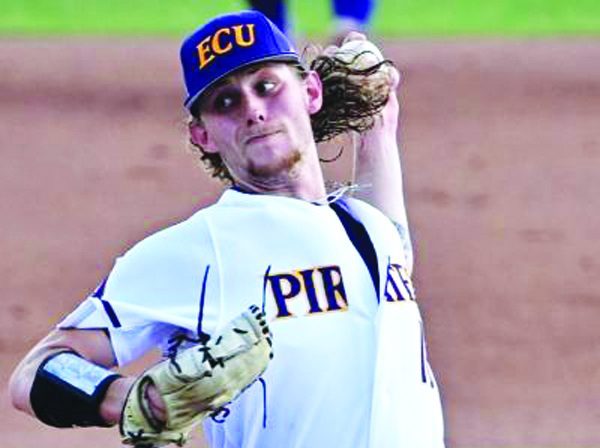 The Major League Baseball Draft has been around for 58 years.

The first day of the 2022 MLB Draft was held July 17. The draft began at 7 p.m. Nearly five hours later, at 11:57 to be exact, the Whisenhunts heard these magical words as they watched from their Mocksville home: “With the 66th pick of the 2022 Major League Draft, the San Francisco Giants select Carson Whisenhunt, a lefthanded pitcher from East Carolina University.”

He was the 66th and final pick of the second round.

“It was nerve-racking sitting there with everybody because everybody was asking me what’s going to happen and I was like: ‘I don’t know,’” the 21-year-old Whisenhunt said. “I found out when it happened (on TV). I was super excited to see everybody else’s reactions. That’s what made it even better.”

Whisenhunt was a varsity pitcher/slugging first baseman for the War Eagles from 2017-19. His senior year was one of the finest that Davie has seen. He hit .342 with three home runs, 18 RBIs, 21 walks and 13 stolen bases. He was untouchable on the mound, going 8-0 with a 0.98 ERA. He allowed 19 hits in 50 innings and piled up 96 strikeouts. He led the War Eagles to a joyous season: 22-4 record, first place in the conference and third round of the playoffs.

Then Whisenhunt headed to Greenville to play for high-profile East Carolina University. After barely seeing the field as a freshman, he soared as a sophomore. He went 6-2 in 13 starts, posted an impressive 3.77 ERA and struck out 79 and walked just 22 in 62 innings.

Whisenhunt, who played for Team USA last summer, had all kinds of hype heading into his junior year. He earned inclusion on four preseason All-America teams, the Golden Spikes Watch List and was named Preseason American Athletic Conference Pitcher of the Year.

But Whisenhunt’s 2022 ECU dreams were crushed two days before the season opener in February, when he tested positive for a banned performance-enhancing substance. A season-long suspension was dropped on him in March.

“(A supplement) was from a nationwide nutrition store,” Whisenhunt told The Athletic. “I didn’t know what was in it or read far enough into it, so I didn’t know all the details that I should have.”

“Carson is not a bad kid,” he told reporters. “I would tell the fans that I’m not perfect. I’ve made mistakes in my life that if maybe that came to light, I wouldn’t be the head coach here. I would ask them to have some grace for him because he’s not a bad kid.”

By being declared ineligible for the season by the NCAA, Whisenhunt was not allowed to work out at ECU facilities. But he had to do everything he could to keep his arm fresh for the upcoming draft, so he hooked up with Mike Mullis, a baseball coach in the Greenville area. From February though May, Whisenhunt would throw bullpens in the mornings, then attend classes and then do more baseball workouts in the afternoons.

“(Mullis) took care of everything,” Whisenhunt told The Athletic. “He said: ‘Hey, I’ll tell you where to be, what time and we’ll go from there.’ It was a really big help having him around and just being able to support me and work through my schedule and his tough schedule as well.”

The Cape Cod Baseball League has produced over 1,400 major leaguers over the years. Whisenhunt desperately needed to play in the Cape this summer to show scouts, who had projected him as a first-round pick before the suspension, that he was ready despite the long layoff. He joined the Chatham Anglers.

“I love it when they come here and have something to prove, so I was all in,” Chatham manager Tom Holliday told The Athletic. “I called and talked to (Whisenhunt) one night and said: ‘Hey man, do what you do there and make sure you don’t come here thinking this is going to be easy. You have to come ready.’”

Whisenhunt was understandably rusty. He hadn’t pitched in a real game since the 2021 summer for Team USA. Although he had a 7.87 ERA in four starts and 16 innings, he showed glimpses of his true self, especially the parachute changeup that coaches and scouts adore. Holliday saw what all the fuss was about, and we’re talking about a man who has seen quite a bit in his day. He’s the father of former big league star Matt Holliday and current Oklahoma State coach Josh Holliday. On top of that, another son, shortstop Jackson Holliday, was the No. 1 pick in the draft.

“He showed the best lefthanded changeup I’ve seen sitting six feet behind a catcher,” Tom Holliday said. “It was the best spin I’ve seen on a changeup in … I can’t tell you how long. He showed me a loose, easy arm, and he showed me good fastball life – not great, because I wouldn’t expect it yet. His legs aren’t underneath him yet. And then I saw the breaking ball – yeah, that’s going to be interesting.”

How long has he had that filthy changeup?

“I did not throw a curveball until I got into high school, so my go-to offspeed pitch was the changeup,” Whisenhunt said. “It was one of those pitches I’ve worked on since I was 6 or 7 years old.”

When the Anglers opened their season June 12, Holliday gave the ball to “Whiz.”

Whisenhunt’s fourth and final start on July 3 was his best. He gave up one run on three hits in five innings.

“Last time he hit 94 and my phone lights up,” Holliday said. “They were saying: ‘He got up to 94, that’s pretty good.’ So no matter what he does, he’s being graded from somebody somewhere.”

Two weeks later came Whisenhunt’s special moment. He became the sixth highest draft pick in ECU history and just the seventh Pirate taken in the first two rounds. Even though he had to miss the 2022 college season, scouts covet big, strong lefty arms – and Whisenhunt certainly fits the bill at 6-3, 209.

But as he sat in the living room with parents Dennis and Mandi and other family members, he had no idea if he would get picked in the first two rounds on Day One or if he’d have to wait until the next night to hear his name.

“I had no clue,” he said. “I mean nobody did. It was one of those things you play it by ear. My advisors (Scott Boras and Co.) were talking with me, but nobody was sure. I was trying to keep mom and dad calm. We had a little family thing and hung out. We kept it small because we had no idea what was going to happen or if it was going to happen.”