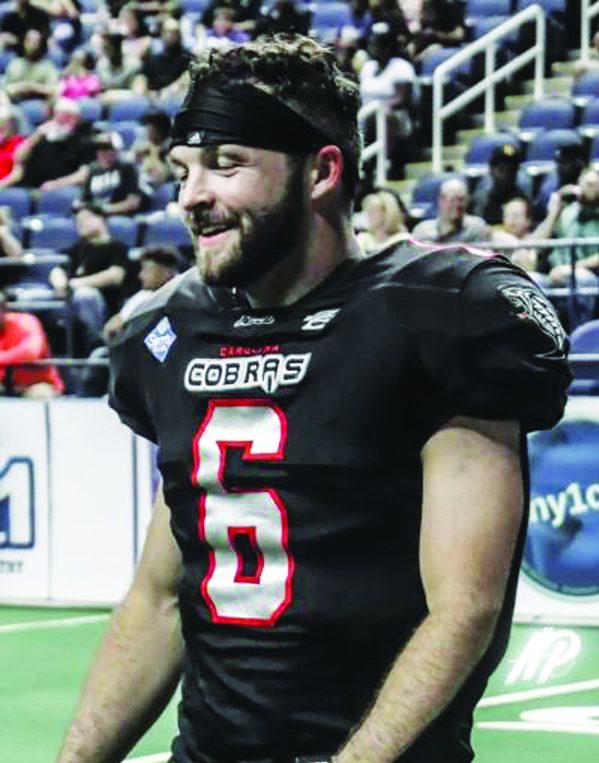 It’s been over a decade since Davie football fans watched Adam Smith star at quarterback, and he’s seven years removed from his extraordinary receiver career at Guilford College.

But at age 28, the 5-10 Smith is still making catches and drawing oohs and aahs.

Smith is a fifth-year professional football player in the National Arena League. He played for the East Carolina Torch in 2018, for the Cape Fear Heroes in 2019 and signed with the Carolina Cobras in 2020, a season that was cancelled by the pandemic. He’s now in his second season with the Cobras, who play their home games at the Greensboro Coliseum.

“The whole season we were No. 1, but our quarterback ended up going down, so we dropped a few,” Smith said. “We definitely expected nothing less than to be the top team in the league, so we’re actually disappointed with 9-5 because our goal was to win the championship.”

Smith was a Division-III All-American at Guilford, where he amassed 247 catches, 3,988 receiving yards and 46 touchdown grabs. He set program/conference records by averaging 8.9 catches for 126 yards per game.

In 13 regular-season games for Carolina, he had 28 receptions for 354 yards and three TDs. But one of his most memorable moments this season came at his old position – quarterback – when Carolina was hosting Columbus on July 16.

“With the weird substitution rules, one quarterback went down, another came in to relieve him and ended up burning him for the quarter,” he said. “That was when I came in. The last time I played quarterback was the first game of my college career, so that was September of 2012.”

As a Davie junior in 2010, Smith was a backup quarterback/starting cornerback, and he helped the War Eagles make a magical run to the state 4A championship game. He was the main man as a senior, and he played as if he invented the dual-threat QB. He threw 18 TDs against just three interceptions, and he also rushed for 771 yards to lead Davie to a share of the conference championship. Back to the Columbus game when Smith had to take over at QB: His first play was, lo and behold, a TD pass.

“It definitely brought back some crazy nostalgia,” he said. “It was cool because our coach knew he could call plays that we (typically) run simply because I know our offense back and forth.”

The TD landed in the arms of Kendrick Ings of Miami, Fla.

“He has the biggest name in arena football of anyone on our team,” Smith said. “He actually did not even play in college. He has a wild story where he was playing semi-pro, he ended up getting a chance with some arena teams and actually got an NFL chance and a CFL opportunity. So he’s got a cool story.”

When Carolina doesn’t have possession, Smith can be found at cornerback. Under new rules, players must play both ways.

“The only thing I’ve not been pleased with is I’ve had to play defense for the first time since my senior year at Davie,” he said. “I’m not unhappy that I have to play defense, but that’s not my speciality. I’m not able to be elite at it sometimes, but as a receiver I’m very pleased. I feel like I’m the best wide receiver I’ve ever been. I’m having a lot of fun. I just want a championship now.”

The top four teams qualified for the playoffs. Carolina played at Columbus in one semifinal on July 30. The championship game will be played Aug. 13.

Unlike years past, there is no salary cap in the NAL. Better yet for the Cobras, their owner (Rob Storm) is not stingy with his money.

“In the past, everybody had to make league minimum,” Smith said. “Of course, that was almost never the case. Everybody did not make league minimum. But this year with the iron man rules and playing both ways, they eliminated the salary cap. The owners are allowed to spend as much as they want on a guy.

“Our owner is pretty big-time. He’s got a big wallet. We always fly to San Antonio. We have driven (to Albany) before, but hopefully we’re going to fly (for the championship game).”

For the large majority of away games, the Cobras travel in charter buses “that fit really big humans with a lot of leg room,” Smith said with a laugh. “I’m in a comfortable position because I’m a normal-sized guy.”

Smith has spent recent years coaching on the Enloe High football staff and teaching at Wakefield High. (The Raleigh schools are 15 miles apart.) But Smith and his wife are getting ready to move to Maryland.

“She’s going to get her PhD up there, so I’m in the middle of a job search right now and trying to figure out what the next step is for me when this season is over,” he said. “I think there’s a possibility I could go back to coaching at a small college, but I’m not really sure that’s what I want to do again.”

Those decisions are not Smith’s priority right now. After dropping two of three regular-season games to Columbus, the Cobras tamed the Lions 65-51 on Saturday and are headed to the title game. They will travel to Albany, the reigning NAL champion, for the Aug. 13 clash.