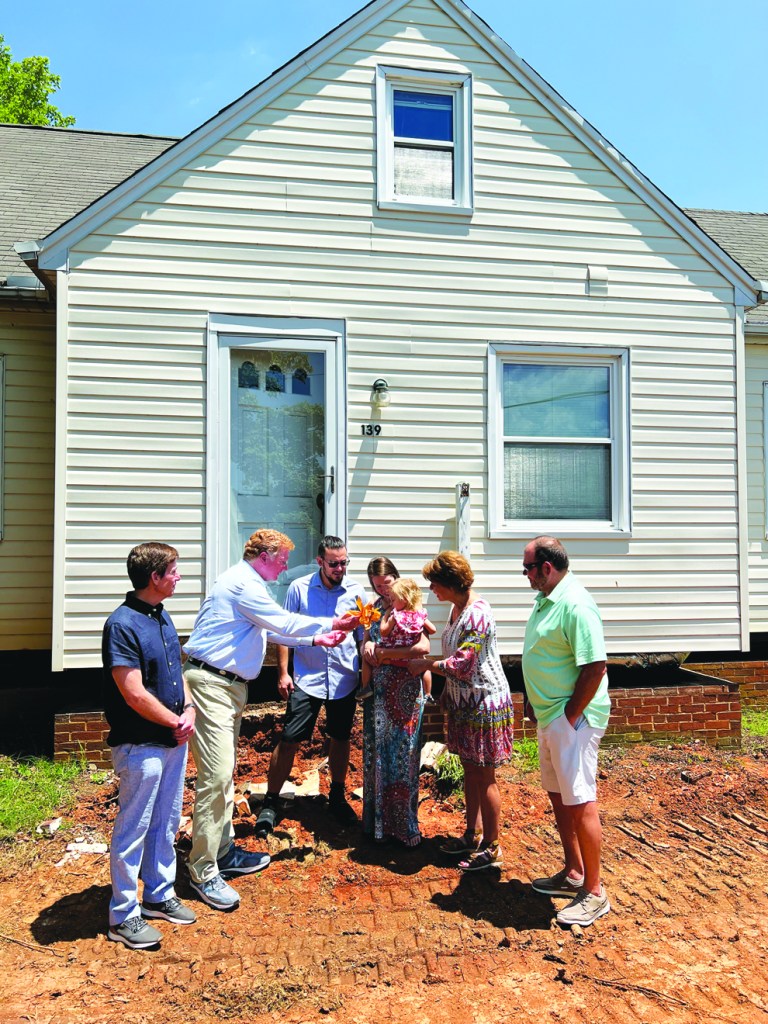 BERMUDA RUN — Nancy Jenkins was overwhelmed by her emotions.

Steps away, her 2-year old granddaughter, Kiana, was wistfully prancing around in a grassy area with a key to a home.

That home had just been presented to her mother, Hannah Harter and her husband, Cody Shin. All they have to do is get it moved down the road a few miles.

“I’m not sure what else I can say at this point,” Jenkins said. “The pieces just kept falling into place like Legos for this to happen. It’s really wild when you stop and think about it. If this wasn’t God’s will, I don’t know what is.”

Jenkins and her daughter will receive two of the three existing homes from a lot off NC 801 here, just past the corner where the road intersects with US 158. The third home will also be relocated and resold.

Mike Kelley and Signet Properties are building Ariston Place, a gated, luxury apartment community with 98 units, on the site and were trying to determine what to do with the three existing houses.

Kelley bought the six tracts of land that the three houses occupied, with the land being downzoned from General Commercial to Village Mix. The new development will have a clubhouse, pickleball court and an open garden area with a gazebo.

Kelley knew that the existing homes on the lot could be put to better use somehow.

“We didn’t want to demolish them and just started looking into the feasibility of maybe moving them somewhere else, or even finding people who may want them,” Kelley said. “There were a lot of moving parts.”

Jenkins and her daughter were looking to relocate back to the area after having sold their homes in Statesville last winter.

“I was living in a camper at the end of Hannah’s driveway,” Jenkins said. “We kept getting outbid on every house we looked at. Then we had a mutual friend who happened to be one the attorneys working on this that connected us to everyone. And that’s kind of how we got here.

“And this is perfect for us, because Hannah grew up here and went to school here 20 years ago and we wanted to be back in this area. She really wanted to be back and living the country life like she did when she was little, running around in the woods and having fun. She wants her kids to run around in the yard and have zip lines and a garden, all the things she had when she was growing up.

“We reached out to area churches and through Bermuda Run Town Hall to see about possibly moving the homes to a new location because we thought that someone or something could still use them,” Bost said. “And then we heard from Nancy, and everything was set into motion.”

Jenkins and her daughter said that their search for a new home began in earnest back in the spring.

“A lot of different people funneled down to us, people we needed desperately to make all of this happen,” Jenkins said. “Daniel Robertson, an attorney and family friend, is also an attorney for Mr. Barney (one of the sellers of the home), told me about it. He is friends with Mr. Barney and actually grew up coming to these houses all of the time. He told me there were these houses we could have, and we would just need to have them moved. And I said, ‘You can do that?’ Because I had no idea. And then as we keep moving forward with it, the way everybody just knew everybody else and was connected was just really something. That’s when you know it’s meant to be.”

The property was rezoned in February, which set the wheels in motion further.

“There were times when we almost lost this deal,” Kelley said. “We had someone want to put a mobile accounting office in one of the houses and that would have ended it. But all roads led back to John (Bost), who said ‘let me make a few calls.’ John was really our go-to guy in making all of this work and it was not an easy journey. But I’d also like to thank the Town of Bermuda Run and Mayor Cross and Andrew Meadwell and Lee Rollins. This has really been a team development. Everyone played a part in making this happen.”

Cross was appreciative of the multi-layered efforts to make everything work.

“Meaningful and purposeful growth and development in our community is very important, but so is history,” said Rick Cross, the mayor of Bermuda Run. “When John and Mike reached out and said they wanted to do something with these homes, that they wanted them to be used by someone who could appreciate them, then there’s really nothing that tells that story better that what you are seeing here today.

“There were a lot of different people that helped make all of this happen. And I’d like to thank Nancy and her daughter for keeping these houses in the community.”

As the gathering was breaking up, all the players joked about getting together again soon once Jenkins and her daughter were settled.

“I feel like we need to have a cookout or something,” Bost said with a laugh, which garnered laughter from several others. “We need to be sure everything is going OK for you. We need to see how the next chapter of this story gets written.”

Jenkins, through her own laughter, didn’t dismiss the suggestion.

“You know, we are going to be right next to each other,” she said. “And that’s just perfect.”