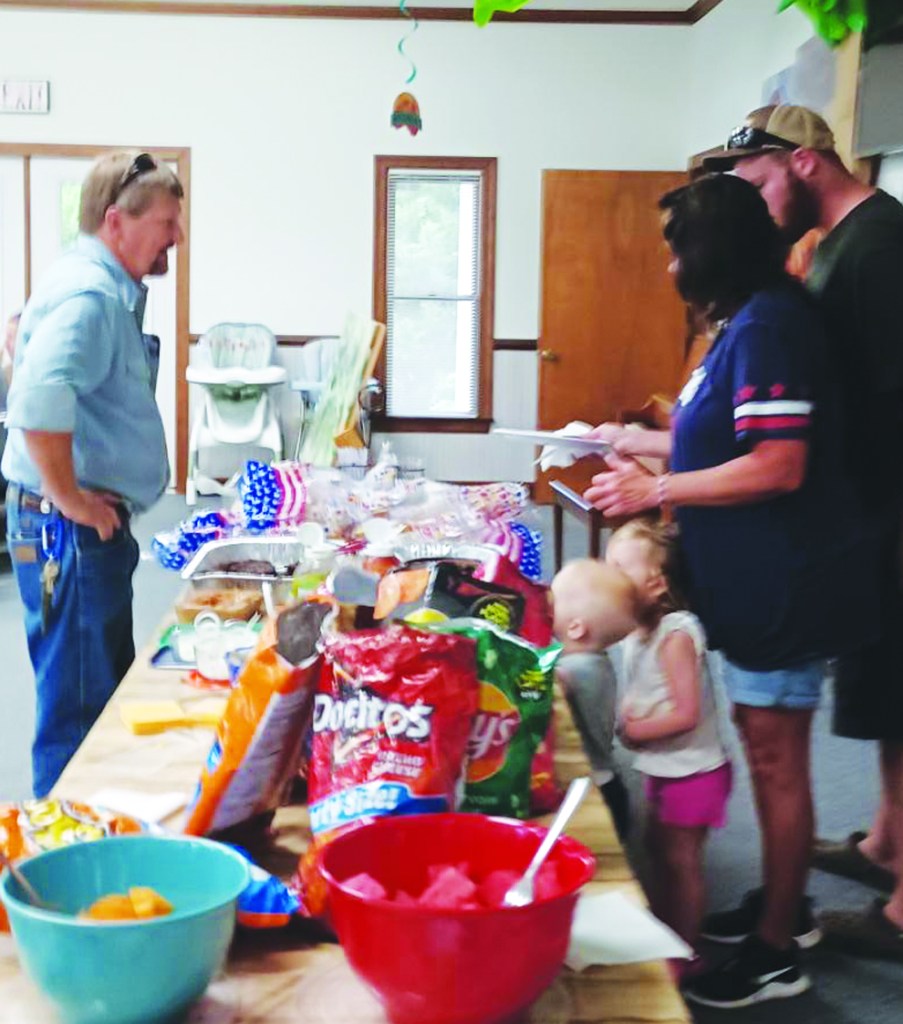 It's snack time at the Society Baptist Vacation Bible School.

Folks of all ages enjoy vacation Bible school (VBS) in County Line. As photos show, lots of folks enjoyed good food and fellowship with others at the Society Baptist VBS kick-off Sunday afternoon before going outside for some fun on the huge water slide and games. Sadly, outside activities were cut short as a storm sent folks rushing back in the fellowship hall.

The Corvettes of Statesville will have a cruise-in to benefit Matthew 25 Ministries of Harmony from 2-6 p.m. Saturday, Aug. 6 in the Signal Hill Mall parking lot in Statesville. The Ministries is in desperate need of canned food and cash.  Everyone is invited to the cruise-in. Folks are asked to bring donations of cash and/or canned food and hand to one of the Corvette club members there. Matthew 25 Ministries, founded in 2007 and locally managed, provides assistance to families of need in northern Iredell County, which includes part of our County Line community.

Our community extends sympathy to the family of Gail Koontz Ijames, who died July 15 at Somersett Court Assisted Living in Mocksville. She had been a resident there for the past four years.

The youngest of three children, she was born in 1942 in Davie County to the late Ernest and Helen Jones Koontz of Mr. Henry Road. She attended Jericho Church of Christ, where she was a member, and also attended Salem United Methodist Church. In 1960 she graduated from Cool Spring High School; where she was marshal & valedictorian, voted senior superlative most intellectual, active member of the Beta & several other clubs, and member of yearbook staff. She graduated with honors from Mitchell College and Catawba College and then earned a master’s degree in her chosen career of library science from UNC-Chapel Hill. She was a librarian in Virginia and North Carolina, including children’s librarian at the Davie County Public Library for many years.  An avid reader, she strongly believed in the importance of books and stories in life.

In December 1972 she married Bill Ijames; the couple made their home in Mocksville and reared daughters Amy and Abby.

A service celebrating her life was held July 20 under the shelter at Salem United Methodist; she was laid to rest in the church cemetery.

Gail had contributed to our community news, especially those involving Cool Spring High. Her support was always greatly appreciated and will be missed.

We extend sympathy to the family of Jimmy Ray “Jim” Seamon, who died Sunday of last week after a period of declining health.  The sixth of seven children, he was born in 1937 in Davie County to the late William “Bill” and Etta Williams Seamon of County Line. In 1948 the family bought a farm on Ridge Road and moved there from nearby Smith Lane off Ridge. He attended Society Baptist Church with his family.

In 1955 he graduated from Cool Spring High School, where he was a school bus driver for two years and active member of the Future Farmers of America for four years. He then married Louise Bailey of Couny Home Road of Davie, his high school sweetheart and wife of 66 years. She joined him in worship at Society, where they were dedicated members and Jim often helped with needed church building repairs and landscaping of the cemetery. The couple built a home on Greenhill Road and reared children Kazanne and Randy. Many years later the couple joined in worship at Hardison United Metodist Church. Retired from R.J. Reynolds Tobacco Co., he was also a skilled carpenter as he learned from his dad and helped his family build many homes.

A service celebrating his life was held last Friday morning at Hardison United Methodist Church;  he was laid to rest in the church cemetery.

We extend sympathy to the family of Elizabeth “Lib” Turner Leonard, who died Thursday afternoon of last week at home after a courageous battle with Parkinson disease. The fourth of five children, she was born in 1947 in Davie County to the late Bruce and Frances Jones Turner of Mr. Henry Road and attended Jericho Church of Christ, where she remained a lifetime faithful member.

She attended Cool Spring High School and transferred during her final high school years to Davie County High School, where she graduated in 1965.

Later in 1965 she married William Bowles, lived on Davie Academy Road, and was a loving dedicated mother to sons Andy and Alan.

In 1999 she married Ralph Leonard, who died at Bermuda Commons just two days before her death; the couple made their home on Sunset Circle off Jericho Road. Lib was retired from Davie County Soil and Water Conservation District after more than 30 years and twice served on the board of directors after retirement.  Friendly and caring, she loved her family dearly and enjoyed spending time with them and serving others. A service celebrating her life was held last Monday at Jericho Church of Christ; she was laid to rest in the church cemetery.

Our community sends get-well wishes to Eva Campbell, who has been at Iredell Memorial Hospital. Betty Anderson has improved and is recuperating at home. Rayford “Tink” McDaniel continues to rest at home with palliative care. Alice Waugh remains in rehab at Davie Nursing and Rehabilitation Center.

Join us in prayer for the Lord’s divine healing and blessings upon Eva, Betty, Tink, Alice, and others who are having health problems.  Pray for the Lord’s comfort and strength upon the families of Gail, Jim, and Lib as they deeply miss their loved ones in life. Also, continue to pray for those affected by Covid; cases continue to increase in Iredell and Davie.

For news and memories to share, please call or text Shirley on 336-492-5115 or email to sdtlink@hotmail.com.