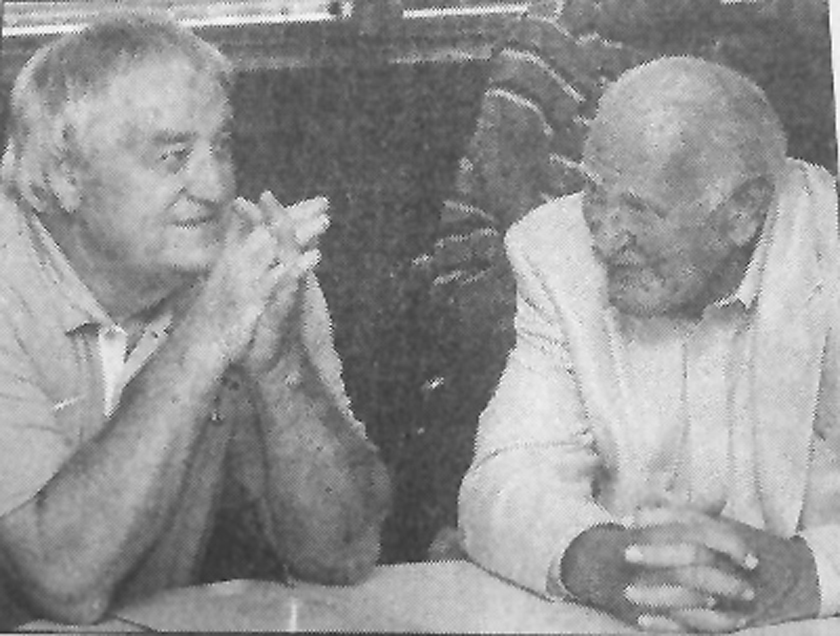 When freshmen showed up for football practice back in Ed Bowles’ day, Davie coach Jack Ward had a contact drill that would separate the men from the boys.

The drill left no doubt who was tough enough to play football. If you didn’t mind popping pads with no face mask, you were a true player.

Bowles, face mask or not, didn’t back down.

“Coach Ward would find out if you were tough,” Bowles said when he was inducted into the Davie High Athletic Hall of Fame, Class of 2012. “He would have the face masks taken off. He put me in contact with big, big people. I was a freshman and they were seniors. Well, I broke my nose.”

The next day, Bowles knew he had passed the test when Ward walked up and handed him a face mask. The face mask was a day late for Bowles’ mangled nose, but earning the face mask meant something in those days.

You can’t make this stuff up. Bowles was grit, determination and fearlessness as a lineman for the Davie Rebels, and he also was a key part of the baseball team before having a distinguished football career at Western Carolina.

Edward Lee Bowles of Salisbury passed away July 17. He was 78. He was born on Sain Road in Mocksville. When he was 2, his family moved near the old Buck’s Barbecue on Highway 158. After college, he became a teacher/coach. He taught in Atlanta, Ga., Gaffney, S.C., at East Rowan High and at West Rowan High. He taught health and P.E., strength and flexibility, World History and Psychology. He coached football, baseball, track, golf and wrestling.

Bowles was a three-year varsity starter in football for Davie from 1959-61, playing tackle on both sides of the ball. He was named to the all-North Piedmont Conference team as a senior, and he earned a spot in the East-West All-Star Game. He played both ways in the East-West game.

When Bowles played football for Davie, the Rebels (the nickname was changed to War Eagles in 1971) played their home games at Rich Park. A portion of the dirt infield was part of the football field.

Bowles has a lot of great memories. Boy, have things changed over the last 60 years.

“When I was in high school, you couldn’t take enough salt tablets,” he said. “We wore heavy stuff, cotton uniforms. Now the uniforms and pads are light. When I went to Western Carolina, we had a water break every 10 or 12 minutes. When I was in high school, we used to put lemons in our mouths just to keep moisture in your mouth. You couldn’t drink a Coke. Coach Ward would make you run five miles. He caught me drinking a (soda) one time in Cooleemee, and I had to run five miles.”

Bowles’ mother, Ina, didn’t like the idea of Ed playing football his freshman year. No problem. Ed forged his mother’s signature, handed the slip of paper to Ward and hit the field.

“I wasn’t going to play football,” he said. “I (forged) my mother’s name on the parent permission slip. I told my momma I’m going to play. Football didn’t faze my dad (Lester).”

“The whistle would blow after two hours,” he said. “(Ward) would call us together and he’d get on our case or praise us. Then he’d say: ‘Now, that’s half of practice.’ So we’d start over again.”

The 1961 Rebels were 4-1 after beating Southwest Forsyth, Taylorsville, Winecoff and Monroe, with a loss to Mooresville mixed in. A playoff berth was within reach. But then it vanished. Bowles remembers the awful feeling of a 9-7 loss to Children’s Home. It was played at 4 o’clock in the afternoon. He also vividly remembers the Monday practice after that crushing loss.

“On Monday coach Ward said: ‘We’re going to learn something today,’” Bowles said. “We got the ball on the 3-yard line, varsity against varsity, and you had to drive the whole field and score. If you got to the other 10-yard line and fumbled, you took it all the way back to the 3 and you had 97 yards to go. And all we did was run it. When we got done, it was quarter till 9.”

Bowles started on three winning teams, with Davie going 7-3, 6-3-1 and 5-4-1. He also excelled in baseball, playing varsity all four years. He was the starting catcher for three years, making the all-NPC team as a 1962 senior.

Bowles was passionate and wide open and as tough as a Ford truck. During a home game against Troutman, Bowles was barreling around second and coach Bill Peeler was giving him the green light at third. The catcher got in Bowles’ way. With a scowl on his face, Bowles nearly killed the guy.

Troutman folks were livid. They demanded a suspension for Bowles. A conference meeting was scheduled. Bowles wound up getting off scot free.

“They were wanting me suspended for being dirty,” he said. “They had to have a conference meeting. Coach Ward was the AD. He said: ‘Nobody voted against you.’ I became good friends with the guy who raised all the heck.”

Bowles reminisced about another wild moment in his baseball career. It came late in the 1962 season at Monroe.

“Grimes (Parker) was pitching,” he said. “Evidently I showed my rear. I got to arguing with the umpire. I told the umpire: ‘I’m going to turn the pitch loose and let it hit you.’ The ump said: ‘The ball was right here.’ I said: ‘No, it was a bad call.’ He went over there and told Peeler: ‘If he doesn’t shut up, he’s outta here.’ Coach Peeler had to come over and talk to me.”

There’s more on Bowles’ resume. After shining in the East-West game, he earned a football scholarship to Western Carolina. He wasted little time asserting himself, breaking into the starting lineup as a freshman. He was a full-time starter for three years.

He entered college between 260 and 270 pounds, but he became a well-chiseled, 230-pound machine.

“I wore 46 pants at one time,” he said. “They ran what they called ‘Fat Boys.’ The Fat Boys had two-a-days – 45 minutes in the morning and 45 minutes in the afternoon. It was fat man practice. I got down to 34 pants. I got in real good shape and learned how to run. I ran all the time. Five miles never bothered me.”

Bowles was good enough to be named one of the team captains as a junior and senior. He was all-conference and all-district as a 1967 senior, when he helped the Catamounts to 7-3.

On offense, he played mostly tackle and some guard. He played some defense as a freshman and sophomore.

“I just loved contact,” he said. “I hated for spring practice to be over. Everybody else was happy. I said: ‘Heck, there’s no more contact for a while.’”

Bowles started his long teaching and coaching career at Briarcliff High in Atlanta, Ga., in 1967. He was a football assistant, head coach in wrestling and baseball and athletic director. Talk about a full plate.

“I was a young man and nobody wanted it,” he said. “They put it on me. Nobody really got mad. I was going to class, too, at Georgia Tech.”

After spending three-plus years at Briarcliff, Bowles moved to Gaffney High (S.C.), coaching football, wrestling and golf for six years. He found a home at East Rowan, coaching and teaching there for 28 years. He retired from teaching in 2003. He was a substitute teacher in Rowan County until 2009. He joined Scott Young’s football staff at West Rowan in 2004, and he helped the Falcons win three state championships.

Linemen are not always as widely appreciated as they should be, so John Grimes was glad Bowles was voted into the Davie hall of fame. His respect for Bowles was enormous.

“Of the people I practiced against and played against at Davie, Ed was the most bone-jarring, tooth-loosening hitter,” said Grimes, who enjoyed a solid football career at Wake Forest and was named to the Davie HOF in 2007. Grimes passed away in 2020. “When he hit you, you knew it. He was quick. I mean extra quick to be a lineman. He was strong. Just natural strength. When he tackled you, the backs wanted to find out what number that guy was so they could stay away from him. He was a headhunter. And he was a very intelligent player.

“He was super on the baseball team, too. He could hit and he had speed. For a lineman, he had excellent speed.”