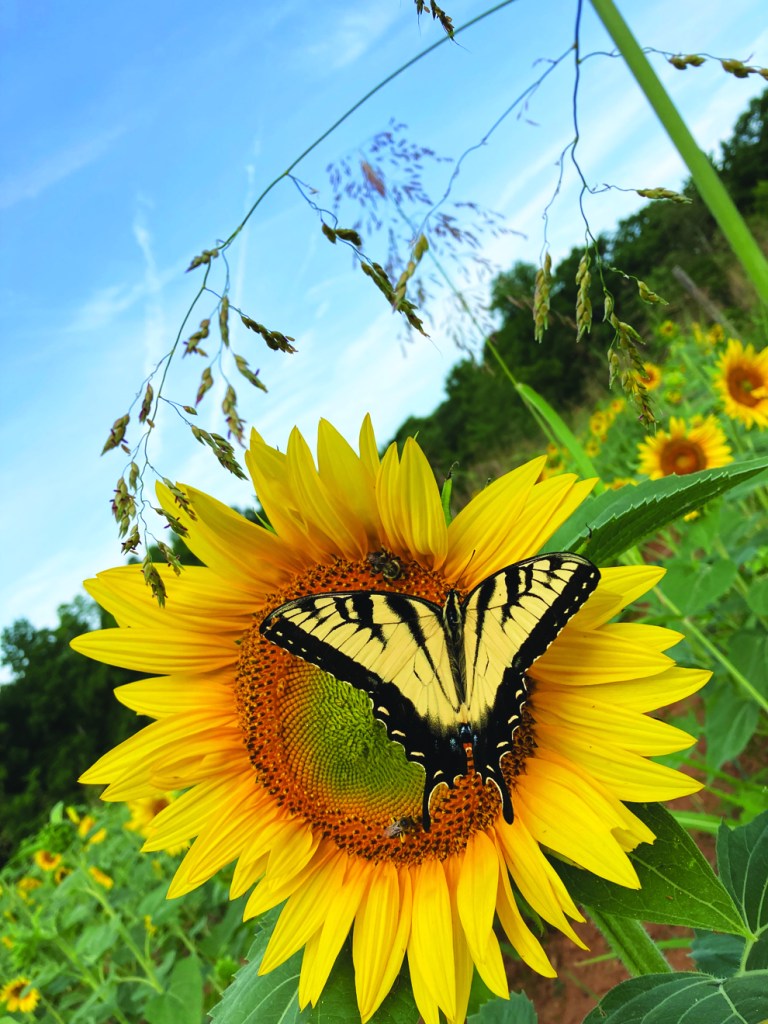 When I was growing up, my favorite spot was my grandmother’s front porch swing.  It was wooden and was attached to the porch ceiling. My cousin who lived across the street came over often, and we swung for countless hours when we were little kids. Our mothers were sisters, and they visited Mama Smith daily until they eventually went to work outside the home. My cousin and I solved every problem in the world from that spot.  We also laughed just about enough to last a lifetime. We were silly as in those days we had to entertain ourselves.  We made up stories and songs and poems too.  Little did we know that those were the best of times and that the innocence and carefree times of youth would become only a memory soon enough.

When I got older, especially during my college days and after he had had a major heart attack and had to retire from his service station, my grandfather and I sat in the swing.  He liked to talk about his early life, his job at RJ Reynolds Tobacco Company, and friends long gone. He also was a lover of history, and we discussed politics back in a time when we could disagree and be civil.  He was much more conservative than I am, but we respected each other’s opinions. I like to give him partial credit for my love of history and current events.  When they got a television set, he always watched the news in addition to reading the newspaper. I continue that routine also.

Many years later I chose to build a house across the street from the Smith house. Lovely neighbors have remodeled the house into a beautiful place, and I never go out the door without looking at it. When I do, I remember those golden days of childhood, especially when I see their swing!!

You really can go home again although it will be different, but memories remain and flourish.

“You’re, making me feel that everything is alright

In a world that’s crumbling, all around us everyday

You are, all the inspiration that I need to find my way

How long have I been yearning, for the day I find my one true love

These beginning lyrics from Lenny Kravitz’s 2011 “Sunflower” song seem so appropriate for what’s happening in the world today. Those brightly colored flowers represent so many positive vibes that we need in today’s world such as happiness, optimism, longevity, peace and they even have a cultural and spiritual significance to people around the world.  They signify loyalty and devotion by following the sun; they can even absorb radioactive toxins from the environment. We need to find our sunflower and hold on tight.

Sunflowers are oftentimes planted in large fields, come in a range of colors and sizes, are drought tolerant and attract pollinators such as moths, bees and butterflies.  I found this to be true  when I embarked on planting our large garden space with sunflowers instead of the usual field of corn.  The taller bright yellow variety is what I chose to plant along with a few rows of the darker  red ones.  Directions were to plant after the last frost and expect blooms 65-75 days later.  With the extremely dry spring we’ve had, these flowers truly are drought resistant and did not disappoint.  Sixty-five days after planting, we had our Sunflower Hill in full bloom to share with the bees and butterflies which were abundant.

Not only did we share with the wildlife, but wanted to share the beauty with family, friends and the community.  Therefore, we held an open field day on the weekend of June 25th and 26th for everyone to enjoy and maybe to raise a little money for a scholarship fund.  It was also a great welcoming home weekend for a precious family member.  Many of her friends came to visit her and also to enjoy Sunflower Hill.  It might have been one of the hottest weekends of this summer, but we had a great turnout with cousins, neighbors and friends posing for family photos that will be cherished.  Robin’s Nest & Dress was also on hand doing a little publicity for her business.  She and her models were gorgeous even in the sweltering heat.

Native Americans held the sunflowers as something sacred; they were an excellent food source, the seeds were ground into flour and also were used for medicinal purposes.  They used the sunflower in their summer festivals to symbolize the harvest and its bounties.  The same can be true in our present world and as the summer wraps up in my garden, I’m hoping to salvage some of the seeds to plant next year.  Looking at the big dead heads this morning, I’m wondering if there will be any left after the finches and doves have their feast though.

A big thank you to all the individuals who participated during our Sunflower Hill days.  The five hundred dollars raised will be given to the Joe Phillips Memorial Scholarship Fund (administered by the Davie Community Foundation), to help a  Davie County student further their education in music and the arts.  Positive vibes continue.

The Work God Gives Us

When I was young, a frequent question was, “What do you want to be when you grow up?” Going back as far as I can remember, I wanted to be a nurse. Later, I went to college, earned a degree in nursing, and worked in the healthcare field for many years.

But my foray into the working world took a circuitous route. I worked at Dad’s hardware store on weekends but wanted to get out and land a real job. My parents weren’t too keen on the idea. They had a lot invested in my education.

My girlfriends, with whom I attended high school, were already working part-time. Many of their parents were affiliated with the music industry or were celebrities. Some girls worked during summer, while others took afternoon and evening shifts after school. I used that sound comparison to justify my reasoning – why I should be allowed to work. Of course, parents always know best – there’d be plenty of time for working later in life. But, eventually, they did permit me to take a job. Baskin Robbins hired me to serve ice cream – my first real job. I was 16 years old and had a car to travel back and forth.

That fall, my friend, Michelle, suggested another opportunity – without hesitation, I jumped at the chance. Michelle worked after school, second shift, as a desk clerk at Spence Manor Motor Hotel, the only luxury hotel in Nashville at the time. An excellent job for a teen. Michelle’s mother, Jo Walker, was President of the Country Music Association – she had clout. Dropping Jo Walker’s name around Nashville opened doors.

Michelle informed me Spence Manor had an opening for a night maid. I had no idea what a night maid’s job description entailed. But I knew one thing – working around country singers and celebrities sounded fun to a teen. I accepted the position and started working. My job was to prepare rooms for sleep – turning back bed linens and placing an aluminum-wrapped chocolate mint on each bed pillow. I replaced all used bathroom towels with fresh ones. Another responsibility was washing, drying, and folding bath linens. My manager taught me how to fold towels properly – did you know there’s a proper way? While towels were drying – I ordered and ate dinner from the Hotel’s 5-star dining menu –a delicious job perk.

Michelle gave me a heads-up anytime a celebrity checked into the hotel. She knew them all – I knew few. Most evenings, I got off work between 9 and 10 pm. The hotel stayed full – and I stayed busy getting rooms checked off before my shift ended.

Built in 70s, Spence Manor was the city’s first all-suite hotel. Located on the world-famous Music Row, the hotel was built to attract celebrities in the music industry. And come, they did – the Rolling Stones, the Beatles, Johnny Cash, Charlie Pride, Alice Cooper, Barry Manilow, the Supremes, Fleetwood Mac, Cher, Gregg Allman, Willie Nelson, Burt Reynolds,  Robert Redford, Rev. Billy Graham,  Bob Hope, and former President Gerald Ford. The list was long. The top floor was dedicated to Elvis Presley whenever he recorded at RCA studios nearby. Today, imagine paying $40 for an executive one-bedroom suite and $65 for a two-bedroom suite – expensive rooms for the times.

I’m fortunate to have enjoyed all jobs throughout my life. In retirement, I still love work.

The Bible tells us in Colossians 3:23-24, “Whatever you do, work at it with all your heart, as working for the Lord, not for men, since you know that you will receive an inheritance from the Lord as a reward. It is the Lord Christ you are serving. (NIV)

Aren’t we blessed to have the work that God’s given us and the talents to do it?