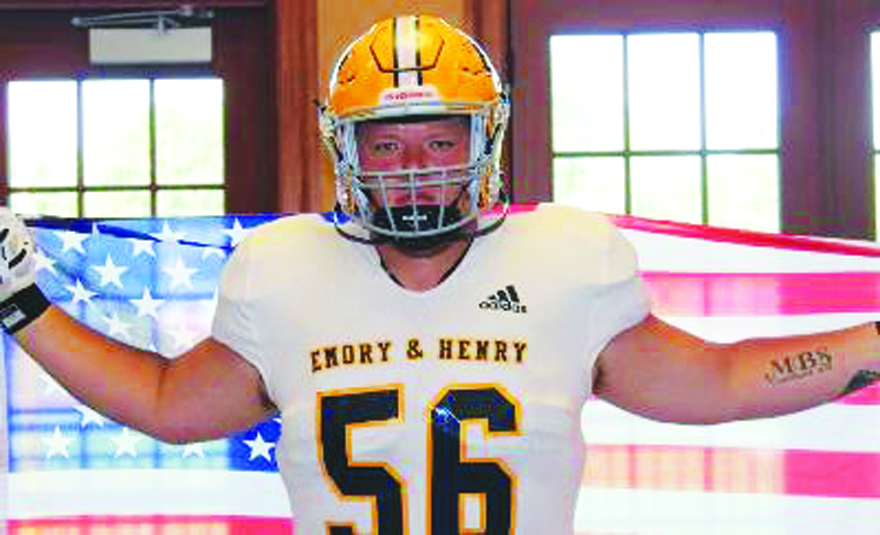 Emory & Henry has been playing football since 1893, when it debuted with 6-0 victory over Virginia Tech. It captured 11 ODAC championships since the league’s inception in 1976, the most by any league member.

But the 2022 season is one the most anticipated in the E&M Wasps’ history. After playing at the Division-III level for 48 years, they are about to begin their first year in the Division-II South Atlantic Conference.

“It’s a whole different mindset,” said Mocksville’s Preston Robertson, a fifth-year senior who is also known as P-Rob. “Before in Division III, you had no summer football. You reported in August and you hoped people had been working out and staying in shape. And it was never the case. But now, the people who get scholarships are required to stay there and be there for the summer. And they want to be there; they want to make the team better. And they want to compete in this new conference.”

The colorful P-Rob is a walking sound bite, and he’s primed for his fourth year in the starting lineup at either center or guard. He paid his dues and sat on the bench as a 2018 freshman, but he cemented himself as a mainstay as a sophomore. In 2019 and 2020, he started at right guard. As a junior in 2021, he was the starting center. .

“Guard is a lot more fun,” he said. “You don’t have to do as much thinking. I look at center as kind of like a quarterback – you have to know a lot of schematics and what you’re looking at, and communicating throughout the line is pretty tough sometimes. I’ve run a spread offense since I was in middle school (at South Davie). I know what it looks like and I know what I’m looking for. All the concepts we run are about the same. Of course, they’re more complicated and we do a lot more stuff with them than we did in middle school and high school. The basic zone stuff, I’ve been doing that since I was little.”

When Emory & Henry hosted Washington and Lee on Oct. 21, 2021, Robertson was a starter for his 22nd consecutive game and he had a slew of fans in the stands to support him. But on the first play from scrimmage, Robertson went down and didn’t get up. He completely tore the MCL in his left knee. He had to miss the last two games of the season and he had to rehab for two months.

“I had Cody (Hendrix), Ben (Summers) and Josh (Hall) there,” he said. “The Summers, the Halls and the Morgans came. I had my grandparents there. All of (girlfriend Kailey Ingo’s) family was there. I had a lot of people there.

“We ran inside zone right and I got pummeled. I got washed up on. The tight end was washing somebody down the line and they both flew into my knee.

“That was one deciding factor in me coming back (for a fifth year), especially since we’re going into a new conference.”

The MCL tear did not require surgery, so it didn’t take too long for Robertson to get back into the swing of things in terms of workouts and preparation for the upcoming season.

“They make you eat right and they just run the dog piss out of you,” he said. “You have no choice but to lose weight and you can eat as much as you want. I can play anywhere from 300-310, just depending on the day. I’ve fluctuated eight pounds in a practice before.”

Yes, Robertson exudes a calm and a confidence of somebody who knows the answers to the test. But he concedes that he can feel considerable mileage physically.

“Physically, I’m not what you’d call a spring chicken,” he said. “After three or four years of starting in college, you get pretty banged up. I feel old and something is always hurting. Coach is always talking about: ‘Man, there’s always something wrong with you.’ It wears and tears on you. I mean I live in the training room. I might as well have a room in there.”

Even though the Wasps will butt heads with stronger competition in 2022, Robertson is confident they’ll be just fine.

“I think the most important part about us transitioning into this season – and the reason why I think we’re going to be OK – is we’re so old,” he said. “Our head coach (Curt Newsome) has coached at Power 5 schools and has won a national championship with JMU (James Madison), and he said I would take a three- and four-year starter in the ODAC over any first-year freshman in the South Atlantic Conference. And he makes a point there.”

As far as the o-line goes, Robertson said all the ingredients are there for a reliable front.

“Me and Parker Coe are both fifth-year seniors,” he said. “We have two senior tackles. We have a center or guard position that’s open, but I think they’ll put somebody in there that’s pretty experienced. We’ve got several other guys who are like sixth men that can play any of those positions that I think are good, too. They’re just a little younger, but they have the will to do it.”

A former Hokie – Noah Sage – could be a game-changer up front.

“We’ve got a transfer from Virginia Tech who will play guard,” he said. “I think he’s going to do us some good. I mean, he was Tech’s strongest person on the team, and he’s definitely the strongest guy here. He’s ridiculous.”

E&M has another transfer who fill a crucial void at running back.

“We have Grayson Overstreet,” he said. “He was a transfer from Richmond, which is a Division I school, and I think he’s going to run the ball for us. He’s really good.

“I do think we’re going to compete. It’s a step faster and it’s a level harder, but I think we’re old enough to do it.”

In recent months, Robertson has been giving back to the game that means so much to him. He plans to pursue a master’s degree in business.

“Through my internship, I’ve been doing some coaching,” he said. “I’ve been volunteering at some high schools (in Virginia), working with some kids. It’s really been pretty neat. I never thought coaching could be a career for me, but now that I see the impact I’ve left on some of those kids, where they’ve started and where they’ve gone throughout the summer, it’s really changed my perspective on coaching. I’m interested to see where my career goes after college.

“You can work on the business side of athletics. Analytics is a big part of the game, especially in college. You can get a great job having a business degree. If I can ease my way into an athletic venue somewhere, that would be pretty cool. But if not, I’m going to hopefully work in the corporate sector of America.”