A cold one with Archie: Chris Reynolds relishes time at Manning Passing Academy 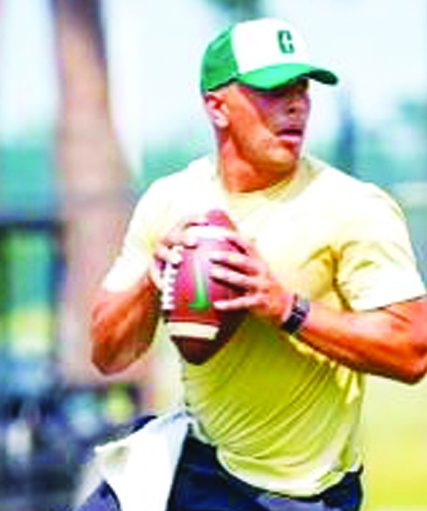 But even cooler: He recently had a cold one with Peyton Manning.

“At one point, it was me and Peyton for five minutes,” said Reynolds, who was chosen to be a counselor at the annual Manning Passing Academy in June. “We were just talking and having a beer. I was like: ‘I can’t believe this is happening right now’.”

In late March, Reynolds was in a team meeting when a text from a strange number appeared.

“I had my iPad because I use that to take notes and a random number pops up at the top of it,” he said. “It said: ‘Hey, this is Archie Manning. You are invited to be a counselor at the Manning Passing Academy. Let me know if you want to do it and I’m going to give you a call tonight.’ I couldn’t believe Archie Manning just texted me. So he called me that night and we had about a 10-minute conversation. I told him I was a camper there (in 2012-13) and he ate that up.”

About 35 distinguished college quarterbacks across the country were selected to be counselors at the Manning Passing Academy at Nicholls State University in Thibodaux, La., from June 23-26 – the same academy that Reynolds attended as a South Davie eighth grader and a Davie freshman. The main guys, of course, were 73-year-old Archie Manning and sons Peyton and Eli. All three are retired NFL quarterbacks.

“I got to train kids in the morning and all the quarterbacks would train together with Peyton and Eli,” he said. “It was so awesome being able to listen to them, learn from them and do questions-and-answers. At night, we would go to a function. We would hang out, eat some food and then we would go to the bar together. It was like a quarterback fraternity. It was awesome.”

And then: “I was out there throwing with (Alabama’s) Bryce Young and (Georgia’s) Stetson Bennett. Bryce Young (who is 6-0) is not the tallest, either. I did not realize he was that small, too.”

Reynolds soaked up everything.

“We got to hear Peyton talking about film study and his line-of-scrimmage approach,” he said. “What’s he looking at? What his film preparation is like. How he watches film. What is he really looking at? It was good to take that back with me because I’m a film geek. I’m watching film all the time. I’m watching third downs one day and I’m watching red zone the next day. I’m watching a pressure tape today.

“I got about five pages of notes. Offseason training. Dealing with criticism and adversity. Are you able to brush it off? How do you brush it off? You see all these great articles about you, which is awesome. Don’t be afraid to peek at them, but don’t live by it. I could go on and on.”

If many were unfamiliar with Reynolds before the MPA began, they walked away remembering his name.

“It was kind of like my whole life,” said Reynolds, who has gone from scrub to starter to star at Charlotte. “(The Mannings) knew who I was but didn’t know much about me. There were not a lot of quarterbacks there that knew who I was. Archie actually called coach (Will) Healy at the end of the week and said: ‘I want you to know your guy was one of the best guys there.’ That was awesome to hear. Archie stayed in the dorms with us, he ran every staff meeting, he did the whole nine yards. He’s walking with a cane but he was there every day working hard.”

The legend of Chris Reynolds has been growing around Charlotte and Davie since 2018, and we have one more season of watching a play break down and his instincts taking over and his eyes scanning the field and the silky smooth QB seeing things that other cannot.

The redshirt senior beat out transfers to win or retain the starting job in 2018, 2019, 2020 and 2021. He’s been around so long – he’ll be one of the few fifth-year starters in NCAA history – that a former teammate is now an offensive assistant coach. “(Dylan Ratliff) is one of my best friends,” he said. “He came in the year after me and now he’s on the coaching staff.”

Besides the field savvy that has allowed him to become a star despite being 5-11, Reynolds is a genuine football encyclopedia.

“When we’re watching (film), how are we watching it?” he said. “Do you have a notepad with you at all times, writing down the smallest things? Are you watching it with a time limit or are you watching it until you feel good? All those little things you’ve got to take into account.”

His girlfriend, Claire Devereaux, who is also from Davie County and is also a Charlotte student, is often by Reynolds’ side when he dissects film.

“I’ll have a script,” he said. “I’ll write down all the coverages I could possibly see. I’ll have Claire read a play out loud. She reads a play, I go to the line of scrimmage, I snap the ball, I visualize everything that is going on. She will yell a coverage and I am moving my feet based on the coverage. So it’s good to have her. She understands it all at this point.”

Chris Reynolds is everywhere in the Davie record book, including the gold standard for career TD passes (59). Brother Jack Reynolds rewrote Davie records as a receiver, including a matchless performance against West Forsyth in which he reeled in 15 receptions.

Now they’re both 49ers. Just like his older brother, Jack entered the program as a walk-on and he redshirted as a 2021 freshman. Jack will likely play a bit part in 2022, but don’t be surprised to see him get some playing time.

“Jack is faster than me now, so that sucks,” Chris said with a laugh. “We were about the same last summer. He might have had me by a step, but now I just can’t keep up with him. So I definitely saw the jump this year.”

In the Green & White Spring Game in April, two of Chris’ 13 completions went to Jack.

“No touchdown but we’re saving a touchdown for a real game,” Chris said. “Think about it. We used to do that in the backyard and now I will get to do this in a real stadium in front of fans.”

Jack is fourth on the depth chart at H receiver.

“Jack is three times better (than he was as a Davie senior), but it’s tough,” Chris said. “He’s a walk-on like I was and he’s got three veteran receivers in front of him. I can understand his frustration, but Jack has been able to roll with the punches. He dropped some weight. He got rid of all the crap weight and he’s moving so much better. He is shifty and he’s catching coaches’ eyes. They love him. He’s got to take it one day at a time and have a great camp.

“If he does things the right way, you could definitely see him on the field at some points. He is definitely a utility guy. He’s a guy who needs to play in space. He’s very knowledgeable with the offense. He knows what to do at all times and he works really hard. People love him. He is not just Chris’ little brother. Jack is his own person, which is my favorite part. He’s doing it his way and he’s doing it the right way.”

Next year at this time, Chris could be a professional player. Whenever his playing career ends, coaching could be the next chapter in his life.

“I could see myself coaching,” he said. “I know I’m going to stay around football. We will see about college; it’s a little different. You never know where you might end up in a matter of three years. But I’ve got to stay around it because I’ve learned so much and I want to be able to give back.”