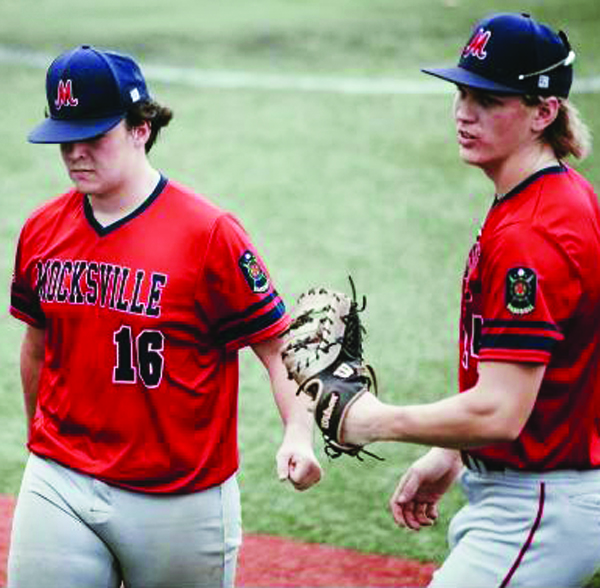 The Mocksville Legion baseball team’s offense had an electrifying start in Game 2 against visiting Rowan County on July 13. It blazed in front in the bottom of the first. It answered a Rowan uprising by regaining the lead in the third.

The rest of the game, though, inspired more groans than cheers. Mocksville spiraled and lost 16-6 as Rowan swept the best-of-three, second-round series in the Area III quarterfinals.

“Our backs were against the wall (from the start of the series),” coach Charles Kurfees said. “We had already played three games (while Rowan had a first-round bye).”

In the top of the first, Rowan’s Cole Johnson doubled and scored on a sac fly. Mocksville was not fazed, scoring three in its first at-bat. After Blake Little and Dan Loyd rapped singles, both scored on a Ryan Thiel double. Jackson Sink’s sac fly brought home a third run.

Rowan rallied to tie things at 3 in the top of the third, but again Mocksville had the answer. Singles by Loyd and Thiel were followed by Hunter Daywalt’s bases-clearing triple.

The 5-3 lead, though, was short-lived. Rowan sent 13 batters to the plate in a soul-crushing fourth. Two hits was followed by an error that allowed two runs. Then came back-to-back bunt hits. Then came two walks sandwiched around an error. A three-run homer capped Rowan’s eight-run marathon inning. When the dust settled, it was 11-5. And Rowan was not done yet, scoring in its last five at-bats.

“They started bunting and we couldn’t field the bunt,” Kurfees said.

Rowan, which improved to 30-7 with its 15 consecutive victory, blended 13 hits with eight walks. A Mocksville meltdown – eight errors – contributed to its fate. Four Mocksville arms combined to throw 178 pitches. It was an uncharacteristic three-inning outing by ace starter Darren Shore, who had been scorching hot over his previous five starts (2.15 ERA across 26 innings). This was his shortest outing among 10 starts.

“We ran out of pitching,” Kurfees said. “Darren didn’t have his good stuff and we didn’t get to use Cole Whitaker (who would have been eligible to pitch in Game 3).”

Mocksville had success against Rowan starter Jake Blevins, who only lasted four innings. The Pfeiffer recruit had dominated Mocksville when the teams met on June 28. But the Burton brothers stifled Mocksville’s offense over the last three innings. Drew Burton, who posted one of the lowest ERAs in West Rowan history in the spring, tossed two scoreless innings before Zander Burton closed the door.

But Rowan’s biggest weapon was Casey Gouge. He was spectacular in both games. He did the pitching in Rowan’s 1-0 win in Game 1, and he swung a menacing bat in Game 2, swatting two homers, scoring four runs and knocking in four.

Mocksville’s first five batters accounted for all nine of its hits. Loyd went 3 for 4 with a double. Thiel and Daywalt both went 2-4. Little and Sink both went 1-3.

Thiel and Sink continued to swing hot bats. Thiel went 10-19 during a six-game hitting streak and closed at .337. Sink hit safely in the last four games to finish at .298.

Kurfees had few complaints with how Mocksville played down the stretch. An 0-4 start, which extended its losing streak to nine dating to 2021, inspired confidence in no one. But it kept plugging. It dropped engine parts on the road as it endured losing streaks of four, six, three and three games. Mocksville kept plugging. It had a feel-good triumph over Foothills in the first round as it scratched and clawed to a 10-19 record (10-13 if you throw out the matchups against top-seeded Rowan).

“These guys really improved as the season went on,” Kurfees said. “They learned a lot. It was a challenge at the first of the year. I didn’t know if we’d win a game and we wound up winning a playoff series. Not only that, we’re the youngest team in the whole area. We did pretty good. We worked them hard. When it was 90 degrees at 4:30 in the evening, we hit them 100 or more groundballs apiece. We did everything we could to try to get better.

“We would like to thank everyone for the support – the players, concession stand ladies, coaches, PA announcer, scoreboard operator, gate operators, grounds crew, sponsors and most importantly our fans and the community.”

If everyone who is eligible returns in 2023, Mocksville could be a contender. “If they’ll all come back and be committed and loyal to the program and we pick up a few more pitchers, we could be good,” he said.