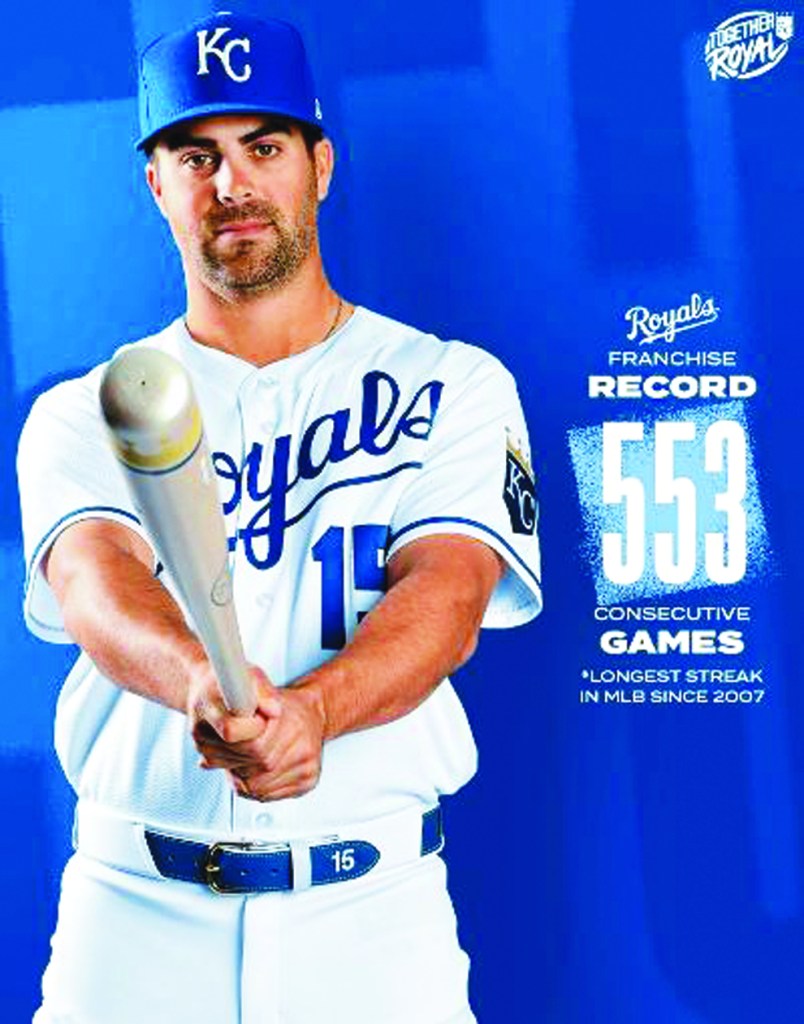 When Whit Merrifield, the iron man of the major leagues since June of 2018, could not suit up for Kansas City’s game on July 11, the longest active consecutive games played streak came to an end.

Merrifield played in a franchise-record 553 straight games for the Royals, the longest streak in the majors since Miguel Tejada had a streak of 1,152 games in 2007.

He was playing second base on July 10 when he felt “a pop” while chasing a foul ball. He left the game after the fourth inning. Merrifield was diagnosed with a bone bruise and ligament swelling in his right toe, and the next day a streak that dated to June 25, 2018 came to an end.

“It’s unfortunate it had to happen this way,” Merrifield, who lives in Advance in the offseason, said. He graduated from Davie in 2007. “I’ve been lucky, but I put myself in a position to play every day physically. Mentality-wise, I’ve shown up ready to play no matter the circumstances, whether I was going good or bad.

“It’s been a long run. I’m proud of it. I’m not sure it will be touched anytime soon by someone that plays the way I play. Maybe like a DH or a first baseman. But to bounce around, play multiple positions, run, steal bases, play in the weather that KC has to offer. I’m pretty proud of the number I put up.”

If it was the left foot, Merrifield said he would have tried to play through the injury.

“I think I’d be able to manage it if it was my plant foot,” he said. “But it’s my load foot. Hitting, you want a lot of weight on your backside. Try pushing off your backside while you’ve got a big toe that’s bothering you. I don’t see it being beneficial for anything that has to do with my swing. It’s going to take away bat speed. It’s going to make me fall and just put me in a bad position that, frankly, could create some bad habits. I’m finally getting good habits. I don’t want to go back to bad habits.”

The two-time All-Star, two-time MLB hits leader and the stolen base champ from 2018 is wearing a walking boot for a few weeks. Merrifield hopes to return after the All-Star break, although he might have to play through some pain.

“You’ve got to stay relatively healthy and you play through a lot of stuff people don’t know about,” Kansas City outfielder Andrew Benintendi said. “It’s definitely something that’s a big accomplishment.”

Detroit manager A.J. Hinch said: “Obviously, I feel bad for him because the game needs its best players on the field at all times. Coming to Kansas City, Whit is in the lineup and is leading off and he’s playing some position and he’s going to do it well. Even in his days where he’s not swinging the bat particularly well, he’s a difference-maker on the bases. When he’s not on base, he’s playing incredible defense. The longevity of that needs to be respected because to do it here in Kansas City as long as he did, it’s sad to see it come to an end.”

Kansas City manager Mike Matheny: “It was one of those things that I was aware of, but it just wasn’t a forced issue because he’s just a guy that was able to help us win every single day. The versatility also plays into that where we know we can put him in different spots. DH – not very often – but that was helpful at times when he’d feel (it) a little bit. But overall to be able to continue to answer the bell … One of the things about this game that makes it very unique is that day-in, day-out nature of it. He’s taken a lot of pride in preparing himself and being able to go out there every day.”