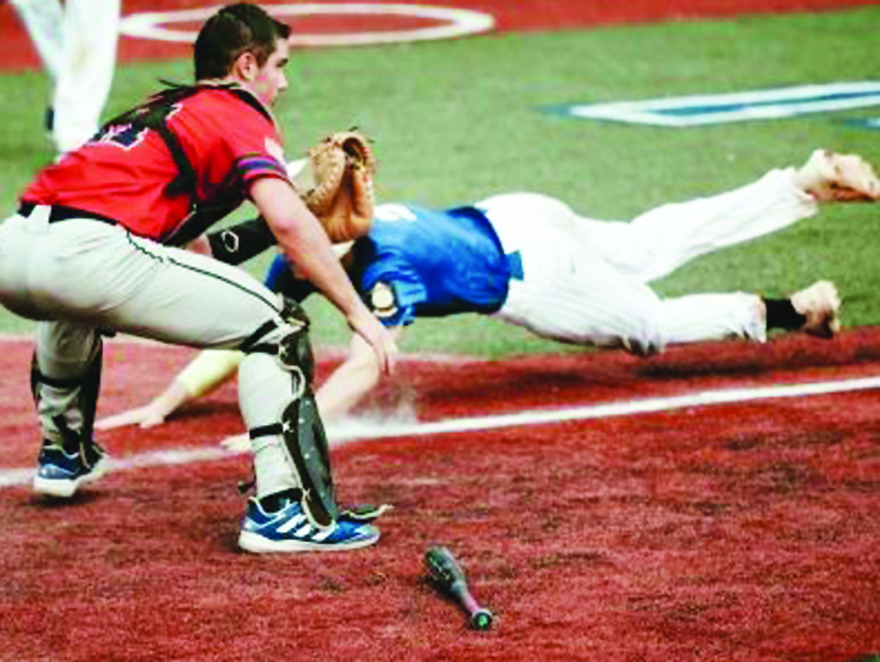 Dan Loyd did something amazing in Game 1 of the second-round series against a top-seeded opponent that entered with a 13-game winning streak. He pitched a three-hit shutout for six innings.

Loyd provided hope for underdog Mocksville, only to be foiled by a seventh-inning run that spelled the difference. The final score at Newman Park on July 12 was Rowan 1, Mocksville 0.

“It was a helluva game, but it was a tough loss,” coach Charles Kurfees said. “It was about as good a game as you’ll ever watch.”

After lasting just two innings in his previous mound start, Loyd delivered an eye-opening performance in the first game of the Area III quarterfinals. He threw 90 gutsy pitches. Mocksville pitchers have two complete games this season, and Loyd owns both. The only run of the game was unearned.

“Dan was lights out,” Kurfees said of the rising senior at North Iredell. “He went toe to toe with Casey Gouge. He pitched really good at Greensboro (on June 12), but he had been up and down. But you talk about a guy who has improved. His ceiling is so much higher now. He’s big and strong and he’s going to be able to play on the next level somewhere. He’s going to get a chance.”

Gouge refused to let Rowan lose. The recent graduate from West Rowan went the distance as Loyd’s counterpart while walking one and fanning nine. Both pitchers finished with five-hitters. Gouge, who is headed to Catawba, ran his record to 8-0.

The game produced an interesting matchup when Rowan’s leadoff man came to the plate. Like Loyd, shortstop Cole Johnson is a rising senior at North Iredell. But Johnson plays for Rowan instead of Mocksville. Loyd walked Johnson to start the bottom of the first, but Ryan Thiel made sure that didn’t lead to anything by throwing him out trying to steal.

From the top of the first through the top of the fourth, neither team sent up more than four batters in an inning. Rowan’s first chance to break through was the home half of the fourth when it reached with a walk and a one-out single. But Loyd got the next two to fly out.

Mocksville threatened in the fifth. Jackson Sink singled and advanced to second on Lawrence Hancock’s bunt. With two outs, Parker Simmons singled to center. Kurfees had to gamble in a 0-0 game with two outs, but unfortunately for Post 174, Sink was thrown out at the plate.

“I had to send him,” he said. “They were nervous. We had them on the ropes. Our kids played like they didn’t have a care in the world. We had nothing to lose and having nothing to hang our heads about.”

Johnson walked again in the fifth, but Loyd struck out the next batter to end the inning.

After the first batters were retired in the top of the sixth, Mocksville got something going. Loyd and Thiel had back-to-back singles. But with runners at the corners, Gouge got a strikeout.

In the bottom of the sixth, Loyd worked around a leadoff double and the suspense mounted.

Mocksville went down 1-2-3 in its final at-bat, and an all-time pitchers’ duel was finally decided in the bottom of the seventh.

Rowan’s first batter singled. The next man put down a bunt. An errant throw at first allowed the runners to move up to second and third. The next batter ripped one down the third-base line. Jaylin Gwyn nearly snagged it, but it glanced off his glove and Rowan celebrated its fifth win over Mocksville in as many tries this season.

Rowan moved to 29-7 with its 14th straight win. Fifth-seeded Mocksville walked away 10-18 and down 1-0 in the best-of-three series.

“My third baseman dove and almost caught it,” Kurfees said. “It goes off his glove. He looked like George Brett or Mike Schmidt. If he catches the ball, he falls right across third for a double play. (Gwyn) was upset after the game. I said: ‘Dang man, that thing was smoked. It’s not your fault.’”