To Ney or not to Ney: French TV crew here trying to unravel history’s mystery 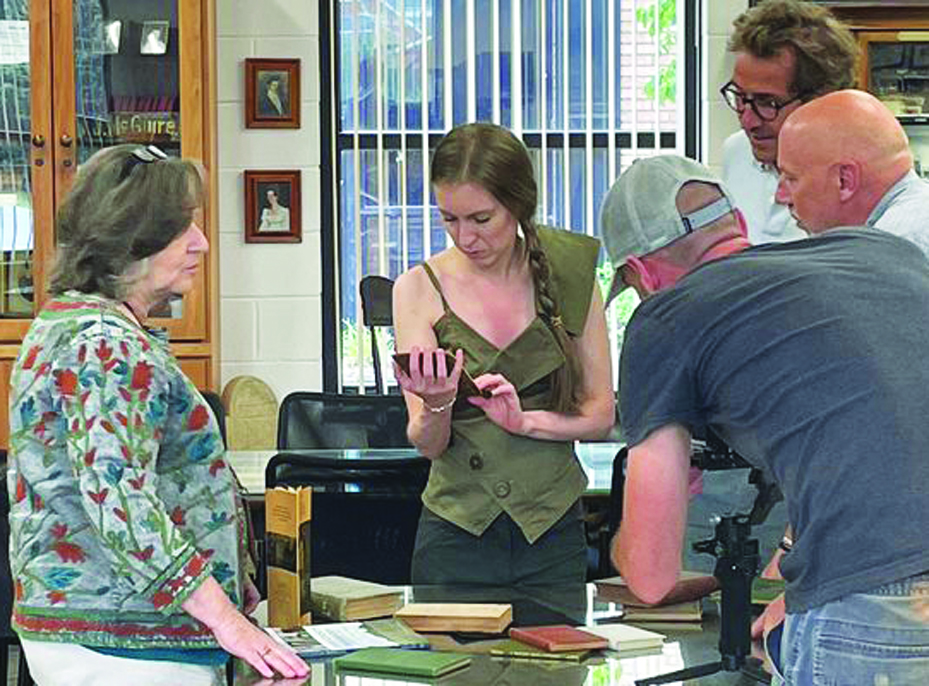 Almost 200 years ago, in 1823, a French stranger showed up in Davie County and became part of our story as a local teacher.

Last week, more French strangers came to Mocksville to investigate the possibility that he was Marshal Michel Ney of Napoleon’s troops. Four crew members of a French TV show were in this area to excavate Peter Stuart (or Stewart) Ney’s remains in the Third Creek Presbyterian Church cemetery in Rowan County; but they may have found more evidence that the two men were the same person in a little book in the Davie County Library’s Martin-Wall History Room, where they also filmed.

Ney taught local boys his native language as well as Greek and Latin, fencing and a lot of descriptive stories from the Napoleonic wars, perhaps because he knew them firsthand.

When a newspaper landed on his desk declaring Napoleon’s death, often when he had imbibed too freely and on his deathbed, Ney claimed to have escaped execution to hide out here in the Carolina backwoods.

He was an impactful teacher, influencing writer Hinton Helper and politician Thomas Lanier Clingman among many others.

While there is an impressive tomb in Paris where Marshal Ney was supposedly buried, legend has always persisted that he ended his adventurous life here.

Although exhumed at least once before, modern DNA science offered an answer to this mystery. Hence the three Frenchmen and forensic archaeologist Dr. Jennifer Kerner of the University of Paris came to find DNA traces to match to a distant relative in France.

The grave was carefully troweled but no human remains were found, no doubt due to the 176 years that have passed and the nature of the highly acidic soil. The bottom of the cedar coffin box was detected disintegrated, having left an imprint in the dirt where samples were taken in case DNA traces lingered  – but there were no bones.

However, in a twist worthy of a French adventure story, two skull fragments arrived at the cemetery during the exhumation, from Davidson College, where they had been donated 70 years ago, identified as belonging to Peter Ney.

Could they provide DNA with such a weak provenance?

As the dig continued, searches for other clues brought them to the Martin-Wall History Room here.

A French-English-Latin textbook of quotations that had belonged to Ney, donated years ago by Margaret C. Woodson, has many marginal inscriptions in Ney’s handwriting (this has also been compared in the past with inconclusive results).

Dr. Kermer translated and was intrigued by tantalizing clues in his marginalia that offer glimpses into his personal life. More work and consultation on those will follow but particularly compelling is a set of self-portraits he sketched on the back binding of the book, leaving here and in a book in Davidson the only images known of Peter Ney, the teacher.

But that is not DNA.

It was at Davidson College’s library that the French crew, that is preparing a documentary on the subject due to air in December in the French TV show that translates to “History Under The Scalpel,” viewed personal items Ney left to the college, including his lapdesk, compass and flute. The flute offered a surprising option to the archaeologist as the possibility of dried saliva inside the wooden instrument might still provide DNA (having been preserved in a better environment than the coffin).

The flute was swabbed and the skull fragments were scanned and reinterred in Ney’s gravesite, where visitors still frequently leave notes and items to show respect to a man who inspired many and continues to mystify.

This cold case was reopened in a scorching hot week. Will it provide the final answer to our mystery in history? It could if an exact match shows up in the DNA.

More likely though, that may not happen and we will have to settle for knowing that it is probably unknowable, with all modern avenues having been exhausted.

Regardless, P S Ney (as his signature was with a flourish) will be remembered for the contribution of an exceptional teacher to a generation of Davie County young men; that is a profound legacy in itself.

History is always revealing more about itself. In this case, it may come from a foreign source and in a different language.

However, more local information emerged as area historians gathered under shade trees on a quiet hillside and in local archives and the house where Ney died and compared notes. The sum total of evidence emerged. We can only wait and hope for the next chapter to be as intriguing as the past.

The Ney textbook can be seen by appointment only due to its extremely fragile condition but will be on display in the Davie County Public Library History Room on Thursday, July 14 and Monday, July 18 from 3-6 p.m. to any interested viewers.

Phillips manages the collection of Davie County history in the library’s Martin-Wall History Room and is the author of Davie County Mavericks, which includes a chapter on Ney, as well as Historic Shallow Ford, being released in August.