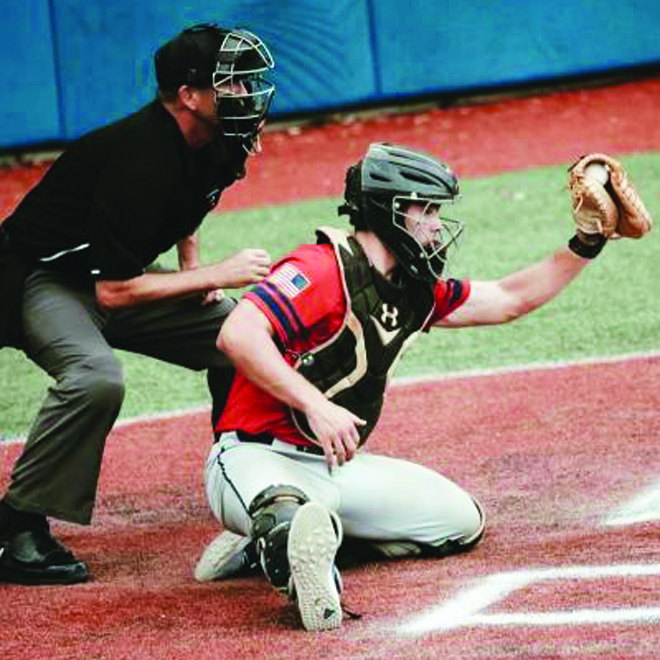 The Mocksville Legion baseball team handled the pressure in Game 2 against Foothills and stayed alive in the first round of the playoffs.

Time and again it was hanging from the edge of the cliff by its pinkies. In a never-say-die battle, Lawrence Hancock capped a 10-inning classic by knocking in Jackson Sink to give Mocksville a 6-5 walk-off win.

“It was exciting,” coach Charles Kurfees said. “We lost it four times and won it five. Can you believe that?”

Back and forth, the teams fought like valiant boxers. In the bottom of the second, Mocksville was 1-for-25 in the series before Ryan Theil doubled. He scored the game’s first run on a Hunter Daywalt hit.

Starting pitcher Cole Whitaker had a two-hit shutout through four, but Foothills got to him in the fifth, a two-out, two-strike triple putting Mocksville in a 2-1 hole.

Then Mocksville’s offense was failing in big situations. In the fifth, it left Blake Little at second. In the sixth, Sink and Hancock put together back-to-back two-out hits, but Sink was called out at home after a pitch got by the catcher. It was still 2-1 as the game entered the seventh.

Down to its final at-bat, Mocksville managed to scratch out a run in the seventh. Parker Simmons was the spark, singling and advancing on Logan Allen’s bunt. Simmons would score the tying run on a two-out error. He headed for third on a groundout, the first baseman tried to get him and his throw was off target, which allowed Simmons to come home. The game headed to extra innings.

“We were done,” Kurfees said. “It was a miracle in Mocksville.”

Foothills regained the lead in the eighth by scoring an unearned run. The first batter reached on an error, stole second and scored on single.

But Sink and Mocksville had an answer. With one out, Ryan Thiel walked on a fullcount pitch. He moved up to second when Daywalt bounced out. He scored on a game-tying single by Sink.

“Multiple times, we had them right where we wanted them,” Tutterow said. “Then every time we went down, we battled and found a way to scratch.”

Foothills broke the tie in the ninth. A batter singled with one out, advanced into scoring position on a wild pitch and scored on a two-strike hit. The next pitch from reliever Daywalt was rifled off the wall for a triple. Now it was 5-3.

But in a game full of one-upmanship, Mocksville just wouldn’t go away, even after the first batter in the last of the ninth was retired. Allen singled to bring up the top of the order. Parker Aderhold, who was 0 for 7 in the series, picked a perfect moment to get a single of his own. Aderhold’s ball was errored in the outfield, which put the runners at second and third. When the next batter struck out and then Dan Loyd hit a grounder to third, victory was all but assured for Foothills.

But in a miracle of miracles, the third baseman’s throw was off line, almost hitting first-base coach Tutterow. Loyd and the first baseman collided. The right fielder hustled in to retrieve the ball, but it was too late. Allen and Aderhold scored to tie the game at 5.

“I’ll tell you, that was something else,” Kurfees said. “I don’t know how we pulled it out.”

Daywalt gave up two runs in the ninth, but he made up for it in the 10th. He set Foothills down 1-2-3 in a span of 12 pitches. Then Mocksville’s offense went back to work.

After fouling off two pitches, Sink opened the home 10th with a shot to right-center. It resulted in a stand-up triple.

“I was seeing the ball well all game,” Sink said. “My last at-bat, I noticed delivery switches between the kid’s fastball and off speed and I was able to jump on a fastball when it came.”

Sink put Hancock in a kid’s dream scenario – bottom of the 10th, game tied, must-win game. He jumped on the first pitch and lined it to right field for the game-winning hit.

“We had a dogpile at second base,” Kurfees said.

“It was nice to see Lawrence make good contact in a big-time situation,” said Sink, a rising senior at Davie. “It was an all-around fun game to be a part of.”

“It was one of the best feelings in the game of baseball,” Hancock, a rising junior at Davie, said. “I was looking to be aggressive and not let the pitch get ahead and just jump on the fastball. My approach was to hit it in the right-center gap and I got a good barrel on it.”

Mocksville (9-17) has been given so many legitimate opportunities to fold its tent, and no one would have argued. But for the fourth time this season, it won a rematch after dropping the first meeting against an opponent. It lost 17-1 to Concord; it beat Concord 7-2 and 5-2 in the next two matchups. It lost 5-1 to Davidson County; it beat Davidson 7-6 in eight innings in the rematch. It lost 6-1 to Stanly County; it crushed Stanly 13-3 in the next meeting. It lost 4-0 to Foothills in Game One; it survived in an all-time classic later in the night.

The unsung hero was Whitaker. With ice water pumping through his young veins, he blazed through the Foothills lineup for eight innings, a 100-pitch outing that included zeroes in every frame except the fifth. He only permitted five hits, walked one, fanned six and threw 71 strikes before getting a no-decision. Then Daywalt picked up his first win in his fifth relief appearance.

“What’s lost in the shuffle is the pitching performance by Cole,” Kurfees said. “He shoved it, buddy. Unbelievable. I’m telling you, Cole was the man tonight. He pitched a heck of a game.”

“We would not have been anywhere without the pitching from Cole,” Sink said.

While the top of the order struggled – Aderhold, Little and Loyd had one hit between them – the 6-9 batters asserted themselves in a big way. Sink, Hancock, Simmons and Allen went a combined 8 for 14.

“Usually when the top three are hitting we’re winning, and tonight it was the opposite,” Tutterow said.