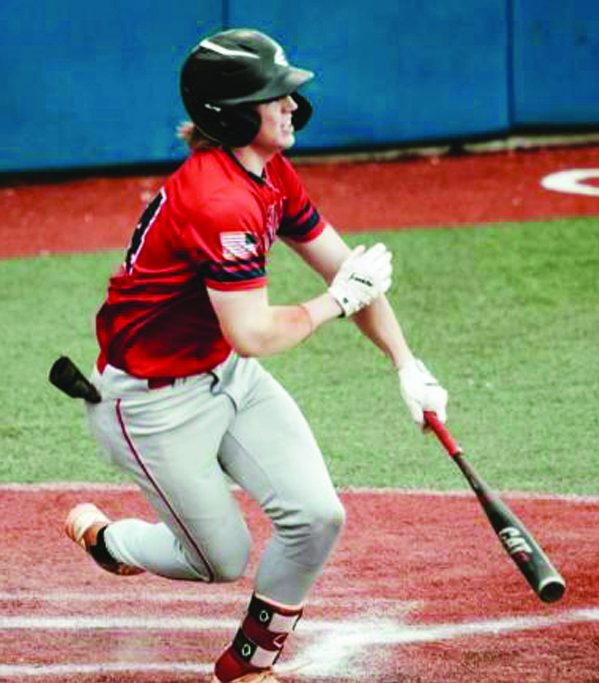 After scoring 13 runs on 13 hits at Stanly in the final regular-season game, the Mocksville Legion baseball team’s offensive flow was reduced to less than a trickle in Game 1 of the first round of the playoffs.

Mocksville had all-around ineptitude (one hit, three errors) in a 4-0 loss at Foothills. The first four innings were played on Foothills home field at East Surry High on July 8. It was suspended by rain and completed the next night at Rich Park. This is a best-of-three series.

Mocksville’s bats were overwhelmed by Mason Howell, who struck out 11 in 5.1 innings. Reliever Brady Edmonds added three more Ks to the visitors’ book.

“(Howell) must have had movement on the ball or something,” coach Charles Kurfees said. “I don’t know what was going on. We couldn’t hit him at all. We couldn’t do anything with him.”

The top of the first was an omen; all three Mocksville batters went down on strikes. In the second, Ryan Thiel singled and Lawrence Hancock walked with two outs. But Howell struck out the side to keep Mocksville off the scoreboard.

Foothills did all its scoring in the bottom of the second. A walk, two singles and two errors added up to four runs.

In the fourth, Thiel was hit by a pitch and Jackson Sink walked. But for the third time in four innings, Howell struck out the side. That proved to be Mocksville’s last real chance to make it a game.

When play resumed the next evening at Rich Park, Christian Brown opened the fifth with a walk, only to see Foothills turn a double play.

Thiel was the only Mocksville batter to do anything, going 1 for 1 with a pair of hit by pitches.

Foothills conquered Mocksville’s ace. Darren Shore, who had gone at least 4.2 innings in all eight starts, had his shortest outing at four innings. He still did not pitch too bad, allowing five hits and two earned runs. Dan Loyd worked two scoreless innings in relief.

“They got a couple infield hits and two walks, and they capitalized with four runs,” Kurfees said.

Notes: Mocksville is the No. 5 seed from the Southern Division, and Foothills is the No. 4 from the Northern Division. … Mocksville (8-17) was held to three or fewer hits for the sixth time this season, and it managed one or zero runs for the third time in four games. … The Mocksville-Foothills winner will face No. 1 Rowan County.