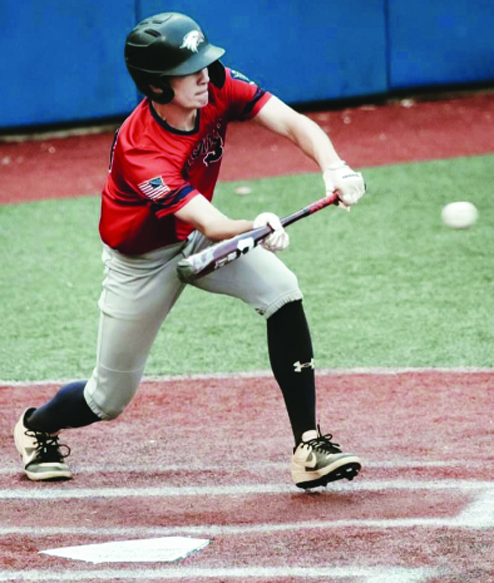 In the first meeting against Stanly County, everything went wrong for the Mocksville Senior Legion baseball team. It had no chance in its third loss in a row, getting outhit 10-3 and losing 6-1.

But Mocksville had a rematch the next day, this time at Stanly on July 3, to close the regular season, and Post 174 chomped down hard on the bit. It gave Stanly a taste of its own medicine, winning 13-3. Mocksville has bounced back from adversity again and again.

“We get knocked down, we put smelling salts on and we come back out,” coach Charles Kurfees said.

Mocksville outhit Stanly 13-5 and got another terrific pitching performance from Darren Shore. “I was afraid we’d get 10-run ruled, but it ended up being the other way around,” Kurfees said.

After going 5-for-40 at the plate in losses to Stanly and Rowan, Mocksville had five hits the first time through the order at Stanly.

In the top of the first, Dan Loyd scored Parker Aderhold and Blake Little with a double. Lawrence Hancock’s hit made it 3-0. Loyd doubled again in a two-run second.

In the sixth, the floodgates opened and out poured four runs to give Mocksville a 10-1 lead. Aderhold and Ryan Thiel had hits, while Little, Loyd and Jackson Sink also reached base. The margin kept growing in a 3-run seventh, the big blow being Sink’s 3-run double.

“They threw their No. 2 pitcher,” Kurfees said. “He’s supposed to be pretty darn good, but we lit him up. I’ve never seen anything like it. We hit it hard.”

Aderhold was electric from the leadoff spot, going 4 for 4 with three runs and hiking his average from .309 to .346. It was the first four-hit effort by a Mocksville player this season. “He just got four hits. That’s all,” Kurfees deadpanned.

“Loyd put himself in the Mocksville record book,” Kurfees said. “Loyd is hitting the heck out of it. If he ever gets to where he elevates those balls, he’d hit a ton of home runs.”

The charge was also keyed by Sink, who went 2-5 with 4 RBIs. “He’s starting to come around at the right time,” Kurfees said of the No. 6 batter.

“Daywalt hits it hard,” Kurfees said. “Gosh, he can hit.”

Shore was dominant again, throwing a four-hitter over six innings with one walk and eight strikeouts. He fired 98 pitches, 64 for strikes. In his last four starts, he’s got a 1.90 ERA. That covers 22 innings, 14 hits and six earned runs.

“Shore just went out there and did his regular thing,” Kurfees said. “He’s tough. Shore and Cole Whitaker, they have toted the (pitching) load for us.”

Shore, a rising senior at Starmount, was not on Kurfees’ radar heading into tryouts.

“He just showed up for tryouts, thank God,” he said. “He’s kin to Denny Key (a Davie hall of famer who starred on the mound from 1987-89). They are related somehow and his grandfather at one time was the N.C. American Legion Commander.”

Mocksville has made youthful mistakes this season, enough to lose 16 times, but one mistake it hasn’t made is surrender.

“We had seven boys who signed up to play who backed out a week before we started,” said Kurfees, who carries 16 players. “But these boys here stuck with it. When people look at that win-loss record (8-16), they don’t understand what we’ve gone through just to get to where we’re at right now. That’s disappointing (to lose the ones who decided not to play), but the bright side is these guys have stuck with it, worked really hard and gotten better. They grind and do whatever they’ve got to do to get better.”