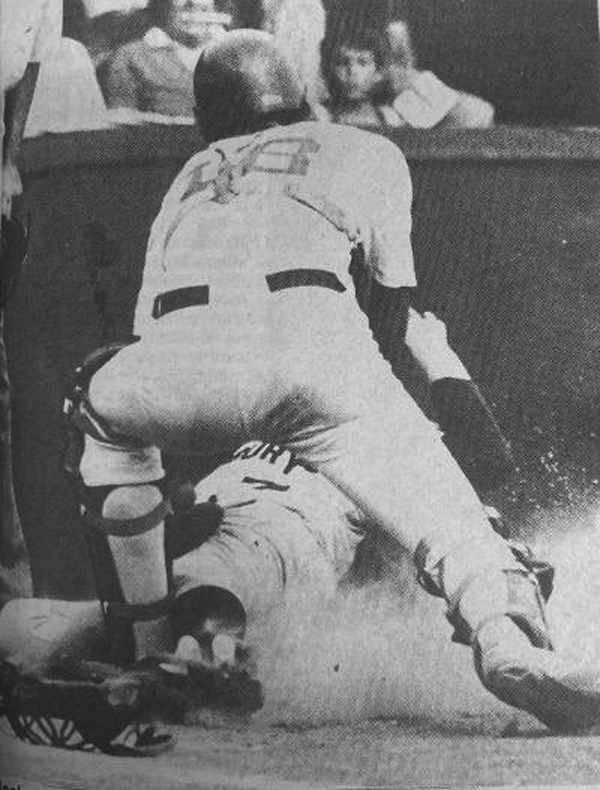 Part VII in a series on the 40-year anniversary of the 1982 Mocksville Legion baseball team.

There were a lot of funny moments from the summer of ‘82, and before we get to the Mocksville-Rowan battle for the division title, here’s one more.

“We were on the way home from Rowan one night,” one of the players said. “We had a flat tire or something. Jerry Swicegood was on the bus as a representative of Mocksville American Legion. Jerry was going to stick his head out the window. He thought it was down, but it was up and he plowed through that thing and busted his nose wide open. He was going to say something to the people out there working on it.”

The showdown for the Southern Division championship was a best-of-seven series in which everything happened.

Although Rowan County eliminated Mocksville four games to one, Post 174 could have just as easily won. The running score was Rowan 33, Mocksville 30; Mocksville lost by one, one, four and two runs.

There was wrenching drama in four of the five games. There was an average of one ejection per game. There was the most legendary ejection in Mocksville history (Jeff Burton was a stud pitcher/hitter and he was a also firecracker). Rowan’s backup catcher had to take over as coach in one game because coach Joe Ferebee, a Mocksville native, and athletic officer Bill Leonard both got dumped. And the one Mocksville victory was defined by Mike Wilcox’s baseball genius.

While second-seeded Mocksville rallied past No. 3 Statesville four games to two, No. 1 Rowan ousted No. 4 Concord in five games. Rowan entered at 23-5 overall, including 13 wins in 14 games. Upstart Mocksville was 15-9. Rowan took two of three in the regular season, but Mocksville had won the last meeting 10-4.

Game One was at Catawba College’s Newman Park. Burton, who was coming off his 1-0 complete-game gem over Statesville, squared off against Rowan’s marvelous ace, Tim Kirk, a lefty who would pitch for the Tar Heels before spending four years in the minor leagues. Despite Kirk’s 6-0 record and 1.75 ERA, Mocksville outhit Rowan 11-7. But Mocksville stranded 11 runners and came up frustratingly short, 4-3.

Rowan grabbed a 2-0 lead in the second, but it would have been more if Dean Corbitt hadn’t missed third base for the second straight game. In the fourth, Wilcox singled and Burton doubled him home to pull the visitors within 2-1.

It was still 2-1 going into the bottom of the sixth, and Burton was feeling it.

“That was one of those nights that everything was clicking,” he said. “My fastball was probably three or four miles per hour faster than it had ever been. Their leadoff guy was a lefty. I could not get him out to save my life. Well, that particular night, I struck him out in four pitches and their dugout looked at me like: ‘Really?’ They started calling me Fernando Valenzuela because I’ve got a Hispanic background.”

In the sixth, Rowan manufactured a run on a double steal to make it 3-1, and it had runners at first and second with two outs. Now we’re to the part that everybody remembers.

When there was a runner on second, the righthanded Burton would occasionally do the same motion as a major league pitcher. Go to YouTube and look up “Luis Tiant’s motion.” The motion wasn’t an issue during his West Forsyth High season, but some umpires had an issue with it during Legion, which made no sense whatsoever to Burton and coaches Ron Morgan and Dan Marion.

“In that day, Luis Tiant was popular,” third baseman Hardister said. “He turned his left foot back toward second and then delivered home. I think Ferebee chirped on that. I knew Burton was OK with that move. Ferebee had the best of the best out of Rowan County, and here he had run up against some boys that’s representing Mocksville and I think he felt some challenge coming on to him, and I think he got a little nervous with  our group of guys and was like: ‘I’ve got to figure out all kinds of ways to win games.’”

“The whole season, he had this move like (Tiant), who turned around to second in his windup,” left fielder Todd Cassidy said. “Jeff had this thing perfected and he used that move all the time when there was a runner on second. It was definitely not a balk. However, there were umpires that weren’t familiar with it, and when they saw him do it, they would call a balk.”

With runners at first and second, Burton started his Tiant motion and plate umpire Bill Fox yelled “balk.” Salisbury Post reporter Chris Powell wrote: “He faked toward second, a ploy he has used often this season. But unbeknownst to Morgan and his pitcher, the balk was called prior to the fake. Burton had been called for a balk on similar plays twice this season, once in Newman Park.”

After the game, Fox told the Post: “He stopped his windup twice before starting again. The only way he could have avoided a balk was to have stepped off the rubber.”

“We tried to talk (to the umps) prior to the game, but they were just waiting,” Burton said. “It was a set-up. We had a feeling what was going to happen. When I pitched at home and used the same move, nobody ever said anything. I didn’t even get the move made before it was called a balk. I did it in high school. Can you really balk to second base? That’s why it all blew up.”

Well, Burton’s fire burned hotter than most. You never knew what he might do.

“If you riled Jeff up, you better look out,” Hardister said.

“Jeff was a character,” Cassidy said. “And he was an outstanding baseball player.”

“Oh, he was hilarious,” right fielder John “Boomer” Bivins said. “He was kind of quiet, but what he said was funny.”

The balk sent Burton over the edge. He heaved the ball deep into the night and the umps gave him the heave-ho. This was how the Post described it: “In frustration, Burton deposited the ball over the fence down the third-base line. Convinced Burton had not lived up to the American Legion Code of Sportsmanship, Fox sent the Mocksville pitcher to an early shower.”

“Jeff turned and heaved that baseball as hard as he could throw it,” Johnson said. “It was way out in the trees.”

“It still gives me goosebumps,” Bivins said. “It sailed through the air. I remember watching the ball leave his hand, watching it go over the trees and then looking over there at Wilcox (in center field) and saying: ‘What the hell just happened?’ It didn’t go to the trees. It went over the trees. Burton was a character.”

“I think there is a batting cage over there now down the left-field line,” shortstop Barry Whitlock said. “He didn’t throw it over the (outfield) fence; he threw it over the side fence. It probably hit one of those houses up there. They’ve never had a foul ball come that far. As soon as they called a balk, he took about two steps toward the third-base line and threw that ball as hard as he could throw it. And it’s not like there were 10 people in the crowd. It was probably about 2,000 there.”

“I was in shock,” Taylor said. “I’d never seen anybody haul off and sling one over the fence. That was the darndest thing I’ve ever seen. That was just like Burton. He was a catbird, let me tell you. He loved to play ball. I mean, he loved it. He was 100 percent in.”

“I was playing left field with two cracked ribs,” Cassidy said. “I remember Ron marching onto the field. I was laughing really, really hard when the ball sailed over my head and went basically out of sight. He didn’t barely throw it. He threw it out of the park, like you’re never going to find it. All the Davie County fans knew what was getting ready to happen because they’d seen umpires before call a balk on him.”

“The radio station in Salisbury carried those games live, and the announcer got all excited talking about him throwing the ball across the fence,” said Steve Langley, who was the athletic officer for Mocksville. “He gave her a hurl, buddy.”

Morgan was furious at the balk call. There was a classic blow-up between coaches and umpires in the middle of the infield. Somehow, Morgan and Marion were not ejected.

“I told him we had a good game going,” Morgan said then to the Post. “Then I said it was too bad we had to have church-league umpires.”

Rowan’s venomous fans let Burton have it as he walked to the dugout.

“The stands were packed and people were screaming all kinds of obscenities,” Johnson said. “Everybody was arguing about it. Guess who came in to relieve him? I had to come in right after he did that in a tight situation. I was standing behind our dugout, which was down the third-base line, warming up (in the bullpen).”

“I’d give anything if that was on video,” current Mocksville coach Charles Kurfees said. “I was in the stands. He chunked her.”

“Well, that shows you how gutsy he was,” Dan Riddle said. “I mean, I would have never thought to do anything like that for a protest. I think that’s kind of what he was doing – he was protesting.”

“He walked back to the dugout slow, calm and steady – with his shoulders back,” said Matt Marion, who was the bat boy. “And the crowd was on his (butt), boy. It wasn’t like he ran to the dugout and hid in the corner. He took his time.”

Next week: Part VIII – the finale.