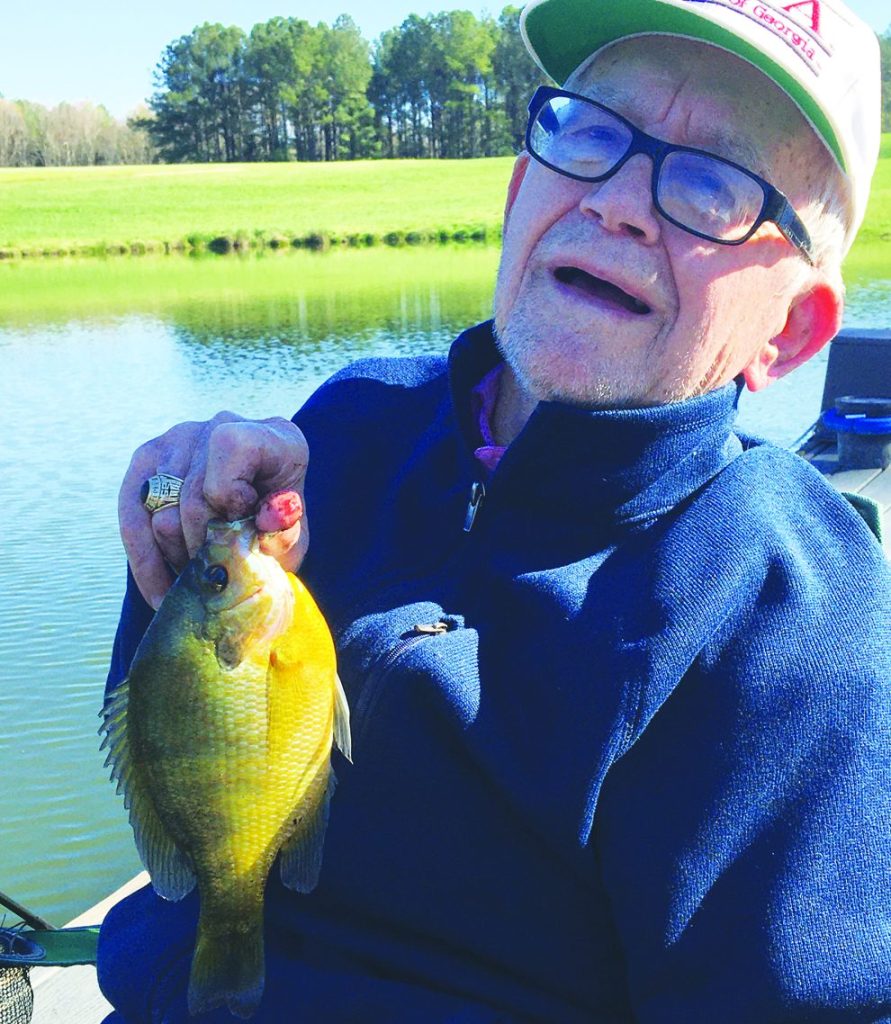 Like most fishermen, the first fish I caught was a bream – from Georgia’s Lake Sinclair at a family picnic in 1959.

The bream I caught was a bluegill, but depending on where you grew up, your first fish could have been a shellcracker, a redbreast, even a pumpkinseed. But it’s not lost on me that it was a bream, the humble, little sunfish of the South.

And with the calendar page turning to July, it really becomes bream season here in North Carolina.Kids are out of school, on vacation trips, visiting relatives, and plenty of them – but not nearly enough – wind up somewhere next to a body of water, rod or pole in hand. Most likely, the fish they catch will be bream. They are everyman’s fish; no need for an expensive boat, expensive tackle or fancy bait. A spot on the bank, a cane pole and a can of worms is all that’s needed.

Summer really kicks off bream fishing because the little rascals are moving shallow to spawn on a regular basis – no matter which species. For the next several months, every full moon will bring a wave of bream to the banks to spawn, fanning out their plate-sized beds on sandy bottoms. July’s full moon is on the the 13th; it’s a “supermoon” often known as the “buck moon” or “thunder moon,” but the only noises fishermen are interested in hearing are the slurps of bream in the shallows acting anything intruding into their nests.

Some fishermen claim that they can smell bream beds, and the groups of dozens of fish piling into small areas of shallow water actually emit an odor reminiscent of a watermelon patch. I’ve never been able to smell them; I’ve relied on a good pair of polarized sunglasses to spot them in 18 inches to 2 feet of water. Once you’ve found a few, a closer look will usually find a whole bunch of them within 30 feet. Often, if you get too close and spook them off their beds, tossing a worm or cricket into slightly deeper water will reveal their presence.

Most of the bream I caught growing up were bluegills. My grandfather used to refer to them as “guv’mint bream” because 75 years ago, when southern landowners were building ponds at the behest of agriculture officials who wanted soil conservation as the final result, that’s what the guv’mint directed to be stocked in all those ponds.

Bluegill (Lapomis macrochirus) are by far the most prevalent of all bream species; they are literally everywhere. The state-record fish, caught in a Henderson County pond in 1967, weighed 4 pounds, 5 ounces. Their short, powerful bodies can put a bend into a light rod like no other.

Redear sunfish (Lapomis microlophus) are another popular bream species. Known as shellcrackers, they are the biggest of the Southeastern sunfish. They general live in water that’s slightly deeper than where bluegills live, and they tend to be found in lakes that support a lot of freshwater mussels and/or clams, hence, the name “shellcracker.” The state-record fish, caught in an Edgecombe County pond in 2008, weighed 4 pounds, 15 ounces. Get these numbers: the fish was 15 1/16 inches long and more than 18 inches in girth.

One of the first state-record fish I stumbled onto was back in 1988, when I got a call from a tiny tackle shop just north of the NC 16 bridge across the Catawba River section of Lookout Shoals Lake. I met Joe Mickey of State Road, former district fisheries biologist with the N.C. Wildlife Resources Commission, at the Alexander County home of Rondal Sweet, who had caught the fish a day or two before. Weighing 4 pounds, 9 ounces, it was certainly a state record; just which one?

Mickey was not surprised that it wound up being a shellcracker. Like a number of Catawba River impoundments, Lookout Shoals is full of freshwater clams and mussels, Mickey turned the fish over and declared it a shellcracker because it carried a colorful border around its black ear flap. That’s the key to distinguishing shellcrackers from bluegills. The bluegill’s ear flap is black from side to side.

Next on the list is the redbreast sunfish (Lapomis auritus), aka redbelly. This is the running-water bream, at home in mountain rivers, Piedmont streams and slow-flowing, tannin-stained coastal rivers. The state-record fish weighed 2 pounds, 1 ounce, and was caught in the Lumber River in 2019. The distinguishing feature is, well, its red belly. Growing up with a deer lease in Virginia’s mountains, a favorite fishing trip was to the South Fork Shenandoah River, where we caught literally thousands of redbellies.

Fourth but not least is the pumpkinseed (Lapomis gibbosus). A fish covered with bright orange speckles, it’s easily distinguished from other bream species by the coloration. It’s much more common in coastal rivers and ponds. The state-record fish weighed 1-pound, 6-ounces and was caught in the Trent River in 2003.

Catching is easy and fun

Live bait is the best and easiest way to catch bream. Any small worm will catch a bream. Crickets are a favorite of bluegill, but less likely to tempt a big shellcracker. A favorite live bait for redbreasts is the catalpa worm, a yellow-green worm found in larval form on the underside of the leaves of certain trees. Pumpkinseed will eat anything.

Don’t use heavy tackle. Light to ultralight is perfect. You lose much of the excitement of the strike and battle by overpowering it. A cane or fiberglass pole is perfect. Tie on a No. 4 or 6 aberdeen bronze, long-shanked hook (the long shank will help you not deep-hook too many fish), crimp on a split shot or two a foot up the line and add a bobber of something at the depth you want to fish.