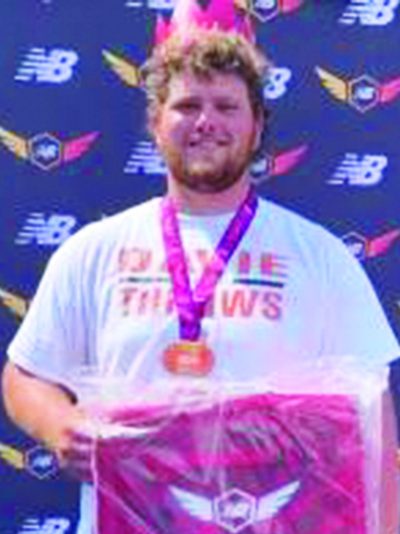 Back in May, Davie’s Spencer Williams won the state championship in the discus with a throw of 180-4. Just for good measure, he took the bronze medal in the discus in the New Balance Nationals Outdoor meet in Philadelphia on June 17.

The trip to Philadelphia closed the book on Williams’ prep career. It was a legendary run from 2018-22. Williams in track & field is what John Parker was to pitching in 1965 and what Dwayne Grant was to basketball in 1977.

Williams also competed in the shot put in Philly. He was a two-time state champ in the shot, and he did something unheard-of by achieving the top four throws in state history. A ninth-place finish in that event in the nationals wasn’t what Williams had in mind. He simply had a bad day in that department.

“It’s once in a generation,” Davie coach Rob Raisbeck said. “Actually two generations because the (shot put) records he was breaking were over 40 years old.”

“In the discus, he did extremely well; he PR’d by four feet,” Raisbeck said. “Going into the meet, his best was 189-something and he threw 193-7. He was only three inches out of second.”

But he was human in the nationals, throwing 59-7.5. The winner from Rhode Island went 66-3.25. The second-through-eighth finishers were from Massachusetts, New Jersey, Ohio, Vermont, California, Ohio and New Jersey.

“In the shot, he did not have a good day,” Raisbeck said. “They took eight to the finals and he had the ninth-best throw in the prelims, which is far below his PR of 66-2.5.”

Raisbeck recalled the Williams from 2018-19.

“When he was in Philadelphia, he told his mom it’s been 1,307 days – or something like that – since the first time he put on a Davie uniform and he threw the shot 28 feet indoors and finished 17th,” Raisbeck said. “He got better and threw like 38 feet outdoors as a freshman, which is good but it’s not 66. When he got to his sophomore year, he showed some development, but COVID was wiping us out. It looked like he was getting better, but the outdoor season gets wiped out.”

Williams’ transformation into a star happened between his sophomore and junior years. He worked diligently in his backyard and used an iron will to become the greatest shot thrower in state history.

“By the time he gets to his junior year, he had dramatic improvement,” Raisbeck said. “When you’re improving year over year by 10-12 feet, it’s amazing to see that kind of exponential growth. The growth between his sophomore and junior was due to the fact that he was determined. He knew that’s what he wanted to do in life and that was going to be his ticket. It was amazing to see that kind of dedication the kid put in.”

Even after winning the state shot put as a junior, he never stopped trying to improve.

“What he did at regionals (at Davie in breaking the state record three times in one day) was the stuff of legends,” Raisbeck said. “He had been so close to the (shot put) state record and I think he felt a tremendous amount of pressure to get that record. And I know he really wanted to do it at home. When he threw that first one and got the record, I think the weight of the world was off his shoulders and then he literally just went nuts and kept throwing further and further. To break an all-time state record by three feet is really unheard-of. It was really cool to experience that.

“When you go to the typical track meet, you don’t see a whole lot of people hanging out at the throws area. But there were a ton of people out there watching that shot put. He had a lot of family and friends there.

“And then the state meet was also really interesting because until his last throw, he had not had a good series at all in the shot. He kept fouling. You get to the sixth round, the last throw, the guy from Sun Valley had a chance to pull the upset. Once the victory was assured and all the pressure was off, Spencer throws 64-3.75 and breaks the state meet record – five feet further than any other throw in the competition. Everything was perfect on that last throw.”

On top of Williams’ obvious throwing skills, there’s his academics and leadership qualities.

“He’s a great student,” Raisbeck said. “He’s a 4.3 GPA. He’s devout in his faith. We had a big throws group. We had 15 kids out there. Your average track team doesn’t have anywhere near that number of throwers, and I know a bunch of the kids were out there just because of Spencer to be a part of that journey. We had kids throwing in the 20s, and we had one kid who couldn’t throw it 20 feet. But Spencer was out there taking time with those kids and helping them perfect their craft even though it took away from his practice time. That shows what kind of kid he is.”

Now Williams is nearing his college career in Chapel Hill.

“It’s pretty close (to a full ride at North Carolina),” Raisbeck said. “You basically don’t get full rides in any non-revenue sport. The way they cobbled together all of of his aid, it’s essentially a full ride. Women get 18 scholarships for track and cross country combined. Men’s track gets some weird number like 12.7. So when  you think that you’re funding an entire track team, which has 20 events, plus your cross country team, and you only get 12.7 scholarships and Spencer is essentially getting a full ride, that tells you what they think of him.”