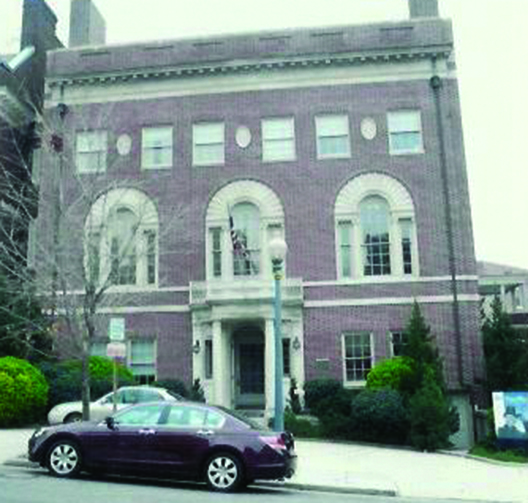 The city, Staunton, Va., where Woodrow Wilson, the 28th President of the United States was born, is only 233.3 miles from Mocksville.

Wilson’s father was a Presbyterian preacher so the family lived in the mansed at 24 N. Coalter St.  It was in that house that Woodrow was born in 1856. After Mr. Wilson’s death in 1924, his widow bought his birthplace house. She enabled the Woodrow Wilson Birthplace Foundation to acquire the property and open it to the public. Only about ten percent of the furniture and other items in the house belonged to the Wilson family, but everything in the house is of the period when the Wilson family lived there. Many of the items were donated by the people in Staunton.  The house is administered by the Woodrow Wilson Birthplace Foundation, 540-885-0897.

The tour of the birthplace property begins at the museum, with seven galleries which trace the places Woodrow Wilson lived during his life. The most interesting item there may be Mr. Wilson’s 1919 Pierce-Arrow automobile.

After visiting the museum, the visitor moves to the manse, which is a two-story brick building.  The Wilson family took their furniture with them when they moved to Georgia, but the Birthplace Foundation has been able to get some items that belonged to the Wilsons, including: Mrs. Wilson’s French-made guitar with mother-of-pearl inlay; a melodeon; a rococo style rocking chair, which was used by Woodrow’s father; a silver tea service, which was a gift to the Wilsons; and the pastor’s walking cane. The nursery is on the second floor. The crib used by the Wilson children is there as is their rocking chair.

The Wilson family moved on from Staunton to Augusta, Ga., and it was there that Wilson experienced the tragedy of the Civil War. That house where the Wilsons lived in Augusta is administered by Historic Augusta, Inc.  That house is open for tours and it is furnished as it was when the Wilsons lived there. The telephone number at the Woodrow Wilson Boyhood Home is 706-724-0436.

Being a Presbyterian preacher meant that the Wilson family moved a number of times.

After graduating from Princeton University, Wilson went to the University of Virginia Law School.  He dropped out of that school, studied law on his own, and passed the Georgia Bar exam in 1882.  He set up a law office in Atlanta, Ga.  Probably the best thing that happened to Woodrow in Georgia was meeting Ellen Axson, the charming lady who became his wife.   Wilson decided that he wanted to teach instead of practicing law.  The Wilson family lived in a number of places where Mr. Wilson taught before he became a professor at Princeton and finally the President of that prestigious university.

While serving as President of Princeton, Wilson was asked by the Democratic leaders of New Jersey to become the Democratic candidate for governor. Wilson agreed and won.  He and his family moved to the governor’s mansion. He was a successful governor, and, in 1912, he was chosen as the Democratic candidate for President. Just over a year after the family moved to the White House, Ellen Axon Wilson died. President Wilson, who seemed to need female support to function, was distraught. Several months later he met Edith Galt.  Edith gave Woodrow the support he needed, and he fell deeply in love with her.  Woodrow Wilson and Edith Galt were married just over a year after Ellen Wilson died. Edith and Woodrow worked as a team throughout the rest of his first term and through his second term.

After leaving the White House, Woodrow and Edith Wilson moved to the house on Embassy Row at 2340 S St., N.W. in Washington. They lived in that five-story town house for the rest of their lives.

The former President of the United States, Woodrow Wilson, died at the S Street house in 1924. His wife, Edith, continued to live there until her death in 1961.

The former president, Wilson, was buried on the grounds of the National Cathedral in Washington, the only president to date to be buried within the city of Washington. Edith Galt Wilson was buried beside her husband.

The Wilson’s S Street house is one of the most interesting presidential abodes because it looks like the Wilsons just left to go on an errand.  Their belongings appear to be where they left them.  Edith Wilson devised the house to the National Trust for Historic Preservation, which administers it as a house museum.

A tour of the S Street house begins in a place the Mr. Wilson referred to as “the dugout.” That is where the former president checked his mail. The room also has several interesting pictures of the president’s former homes.

Next visitors go upstairs to the drawing room on the second floor. There are porcelain plates in a cupboard in that room which were presented to the Wilsons in 1919 by the King and Queen of Belgium. The piano used by Wilson daughter is in this room and the list goes on. In the library one can almost see Mr. Wilson sitting in his black leather chair, which was his favorite place to spend his time.  There is a display chest in the library filled with items that the Wilsons considered treasures.

There is also a solarium on that floor which was a pleasant place to rest before there was air-conditioning because the windows could be opened to allow breezes to blow through.  From the solarium, the family could move to the formal dining room. Food was brought up to the dining room by a dumbwaiter from the kitchen. Another flight of steps takes a person to the third floor.   There are portraits of Mr. Wilson’s first wife, Ellen, and his three daughters in the third floor hallway.  Mrs. Edith Wilson’s bedroom is on that floor where her sewing machine is near the window. The visitor can see Mrs. Wilson’s clothes hanging in her closet. Beside her room is Mr. Wilson’s bedroom. The bed in which he died is a reproduction of the Lincoln bed at the White House. The desk Wilson used when he was President of Princeton University is in that room and there are items given to the Wilsons which they valued in that and all of the other rooms.  There is a cedar closet which holds Mr. Wilson’s clothes. Off Mr. Wilson’s room was a sleeping porch which provided comfort on hot nights before air conditioning became available.

There is a fourth floor in the house is not open to visitors. The laundry and servants’ rooms were on that floor.  From the third floor, visitors go down the back stairs to the butler’s pantry and to the kitchen.  The large cast iron stove is the most memorable item in the kitchen—that stove is large, very large. There is also an old refrigerator with the motor in a globe on the top, which was one of the first models.

The Benbows in their book, “Cabins, Cottages, and Mansions,” says: “By touring this house, visitors can learn much about the time period in which President Wilson spent his retirement.

It also illustrates a great deal about the public career and private life of one of American’s most influential politicians and statesmen who helped establish the status of the United States as a world power and also advanced the cause of peace on the heels of a devastating war.”