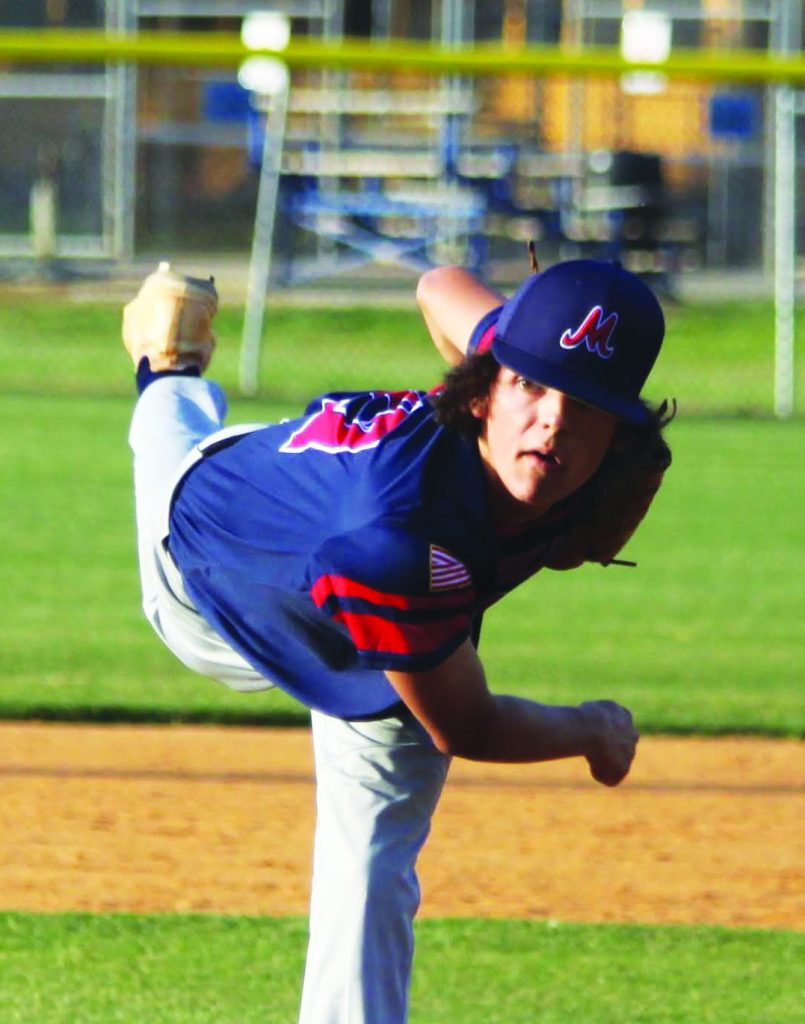 Mocksville’s Senior Legion baseball team staggered home from Kannapolis on June 21, but the next night pitcher Darren Shore, Parker Aderhold and Post 174 met the challenge against Rowan County at Rich Park … until everything fizzled in a 7-5 loss.

The third setback in the latest losing streak was heartbreaking.

“We had them on the ropes,” coach Charles Kurfees said.

Mocksville missed a scoring opportunity in the bottom of the first inning. With Aderhold and Dan Loyd at second and third with two outs, a strikeout ended the inning.

But Mocksville got on the board in the third. Aderhold walked and Blake Little singled to set it up for Ryan Thiel, who attacked the first pitch and singled to give Mocksville the lead, 1-0.

The lead swelled in the fourth. Jackson Sink reached on an error, Parker Simmons walked on four pitches and Aderhold had an RBI single. When Little reached on an error, Simmons crossed the plate. When Loyd walked to load the bases, Mocksville was in position to blow open its 3-0 lead – but Rowan got a groundout.

As you would expect, Rowan fought back. Shore walked the first two batters in the fifth, but he got two outs and then induced a grounder. The ball was errored to load the bases and keep the inning alive. Then another error allowed two runs. Shore had a no-hitter through five, but Mocksville’s lead had been chopped to one.

With two on and two outs in the sixth, Shore got a popout to third baseman Loyd to keep the score 3-2.

Rowan’s right fielder prevented Mocksville from adding on in the sixth. Lawrence Hancock got a two-strike hit and advanced on Simmons’ bunt. Little sent a sharply-hit ball to right, but the fielder robbed him as the score remained 3-2.

“The right fielder made a heck of a play because it was going down the line and it would have scored (Hancock) and been a double,” Tutterow said. “That kid caught it in full stride. He probably should have laid out because he made a shoestring catch and fell when he caught it. He just made a spectacular play.”

Three outs from victory, Mocksville fell apart. The first Rowan batter in the seventh walked on a fullcount pitch. The next man singled to end the night for Shore, who gave up just two hits in six innings. He would end up with four runs allowed, although only two were earned.

“Rowan has three dudes that can put it out of the park, and they had one hit all night between the three of those guys,” Tutterow said. “Shore kept them offbalance. They had no idea what was coming (between his fastball, changeup and slider). When they did hit it, most of the time it was on the ground. He was real tired (after 92 pitches).”

Little came on in relief, and you can’t blame Kurfees for that move. In Little’s previous mound outing on June 9 against Davidson County, he blew away six of seven batters to nail down an extra-inning win. But Little was mortal in this one. He walked his first batter to load the bases and he plunked the next man to force in the tying run. The next batter lined out to second baseman Simmons, but a three-run double followed that. Rowan ended up scoring five runs to put Mocksville in a painful 7-3 hole.

Mocksville did not throw in the towel. In the last of the seventh, Thiel walked with one out. Hunter Daywalt singled and Thiel scored on a wild pitch. When Sink singled, the tying run was at the plate with one out. Back-to-back strikeouts, though, ended the rally as Mocksville fell to 6-13 overall and 3-4 in the Southern Division.

“We just made a couple errors in some bad spots,” Tutterow said.

It was a little miraculous that Rowan scored seven runs on three hits. The reason: Mocksville’s pitchers walked nine and the hosts made three errors. Rowan was able to work around its three miscues in the field and beat Post 174 for the third time this season.

Tutterow said Hancock was far and away the defensive player of the game.

“He made so many plays at second base – deep in the hole, laying out for balls, catching bad hops,” he said. “There were so many bad hops hit at him that he snagged and made the throw to first. Defensively, he kept us in the game. Since Daywalt came up, he’s played second only. Defensively, he’s been great all summer and his bat is starting to come around.”

Interestingly enough, Tutterow helps Mocksville even though he lives in Raleigh. He is a football assistant, the head coach in wrestling and the JV baseball coach at Cary High. Sometimes he stays with his parents in Iredell County.

“I’ve been back and forth between here and Raleigh because of football,” he said. “Sometimes I stay (with my parents) and sometimes I come back (to Raleigh) if we’ve got seven-on-seven. It’s not that bad a drive. It’s an hour and a half to Rich Park.”