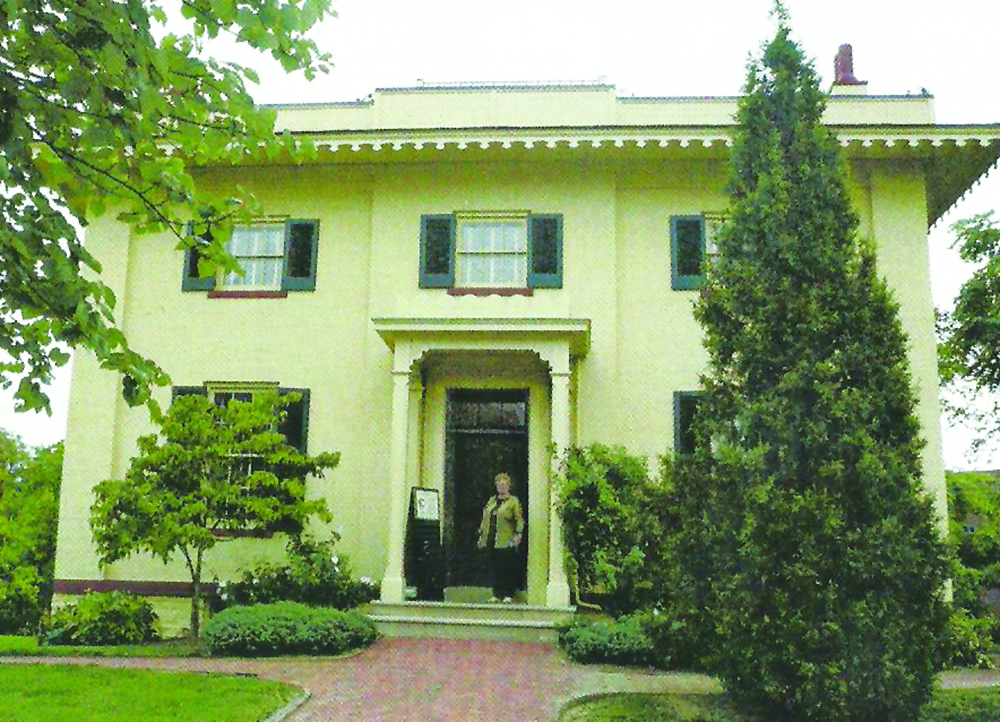 After Theodore Roosevelt finished the term of President McKinley, who was assassinated, he ran for another term. While he was campaigning, he said, “If I am elected I will only serve one more term.” Those were words which he hated he had ever spoken because after he won that election and was completing the term for which he was elected, he really wanted to continue being president.  He knew that he could not run again because he had made a promise.

The man he hoped would be his successor was William Howard Taft. He wanted Taft because he believed that he was the man who would continue the policies which he had begun. It turned out that Taft chose to be his own man and did not follow all of Roosevelt’s policies which greatly disappointed the former president.

The following about the Taft birthplace is found in the book, “Cabins, Cottages and Mansions” by Nancy and Christopher Benbow: “The William Howard Taft birthplace house has an Italianate appearance. It has a cornice, a small piazza, and a ‘widow’s watch’ used by the Tafts, who were amateur astronomers.  It has four restored rooms reflecting Taft family life during the years 1857 to 1877. The restoration features period fixtures and venetian blinds and shades.  One of the restored rooms is a formal parlor, which was once a double parlor. The doors of this room are wood grained. On its walls hang portraits of four adult members of the Taft family painted by William Walcott, who stayed there in 1858. One mantel in this room, which has two fireplaces is original, the other was duplicated later. The room has puddle draperies and Rococo revival style furniture, and a three volume folio, Indian Tribes of North America, on display there. The restored library features a desk made in the 1840s or 1850s which was used by Alphonso Taft (William Howard’s father).  The mantel in the library is original.”

Another restored room in the house is the nursery.  The baby bed there may or may not have been used by William Howard Taft when he was a baby, but it is of the period of his babyhood.  (I did not know what puddle drapes were until I visited the Taft home.)

There is another part of the house which serves as a museum which has Taft artifacts and reveals history of the family, a remarkable family in the history of America.

There is a building next door to the Italianate style house which houses more Taft history. (The Italianate style was evidently popular in the middle to late 1800s.  It is evident at the home of Benjamin Harrison and at the house given to the General Grant for his contribution in making the Union’s effort in the Civil War a success.)

William Howard Taft, after completing his education at Yale Law School, became a successful lawyer. Taft was appointed a judge in the Sixth U.S. Circuit Court of Appeals by President Benjamin Harrison. Taft would probably have been happy in that position for the rest of his life, but he met and married a young lady, Helen Herron, who had greater ambitions for her husband. Helen had visited the White House with her parents when she was a teenager, and she decided then that she wanted to live there some day. She seemed to evaluate her suitors as to their chances of ever becoming President of the United States. She settled on William Howard Taft as the suitor most likely to become president.  She made a good choice.

Mr. Taft was offered a job as Governor of the Philippines by President McKinley.  He accepted that job and was successful.  His wife was also happy living in the islands. She enjoyed living at Malacanang Palace, where the family entertained extensively, inviting high officials and regular Filipinos. The people of the island were pleased to be included in the activities at the palace.

After President McKinley was assassinated, and Roosevelt became President, he offered Mr. Taft a Supreme Court Judgeship.  That is the job which William Howard Taft always wanted; it was not his goal to be President. Mr. Taft’s wife would not let her husband accept the judgeship because she believed that if he became a Supreme Court Judge, he would never become President.  He did take a job in Mr. Roosevelt’s cabinet; that received Mrs. Taft’s approval.

Mr. Roosevelt and Mr. Taft became good friends and close associates. Mr. Roosevelt trusted his friend’s judgement. That is the reason that Mr. Roosevelt chose Mr. Taft as the person he hoped would follow him as president. Mr. Taft easily won the election with Theodore Roosevelt’s backing. He and his family moved into the White House.

Mrs. Helen Taft was one happy First Lady. She had achieved her goal. She seemed to be everywhere, entertaining and even taking an interest in political and official affairs. She was so active and busy that she got the nickname, “Nervous Nellie.” When she had only been First Lady about two months, Mrs. Taft had a stroke. It was serious and she never completely recovered, but she did get well enough to carry on her first Lady duties to some extent. The thing that Mrs. Taft is most remembered for is the Japanese cherry trees which bloom each spring around the Tidal Basin in Washington.  She got the Japanese to give those trees to the city of Washington.

Mr. Taft was not elected to a second term because Mr. Roosevelt, who did not get the Republican nomination for President, decided to run as a third party candidate. The Republican vote was split between Mr. Taft and Mr. Roosevelt so the Democratic candidate, Woodrow Wilson, won.

After leaving the presidency, Mr. Taft taught at Yale, and, in 1921, was appointed as Chief Justice of the Supreme Court by President Warren G. Harding.

William Howard Taft, who was born in an Italianate style house in Cincinnati, Ohio, was able to satisfy the goal of his wife, Helen, who wanted her husband to be President and his own goal to be a Supreme Court Justice—quite a journey.  The 27th President died in 1930 and is buried at Arlington National Cemetery. His wife, who died 13 years later is buried beside him.