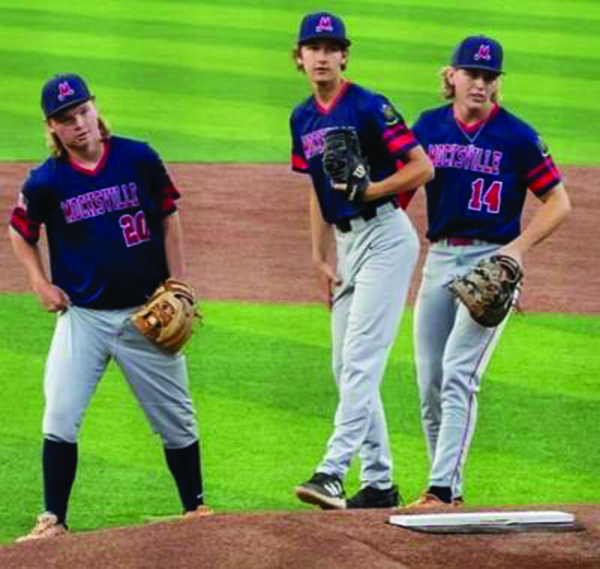 Dan Loyd was the Mocksville Senior Legion baseball team’s starting pitcher in a loss to Concord on May 28 and in a loss to Hamlet on June 4, but he fully arrived in his third start of the season on June 12.

Loyd was the biggest reason for a 5-1 win at Greensboro in the final non-division game of the season.

“Loyd was the player of the game,” coach Charles Kurfees said. “He threw strikes. Not bad for somebody who didn’t pitch at all in high school (at North Iredell). I love him.”

Loyd threw a four-hitter over six innings, walked two and struck out eight. He faced four batters in the first and second innings. He faced the minimum in the third, thanks to Blake Little starting a 6-4-3 double play. He got Greensboro 1-2-3 in the fourth and fifth. He had a shutout going until the sixth, when the hosts used two hits and a walk to get their only run.

“My fastball and curveball were working good,” Loyd said. “My changeup was working alright – I got a couple strikeouts off of it – but it wasn’t working as good as I wanted it to.”

This spring at North Iredell, Loyd started every game at third base but saw no mound action. The Legion season has been a confidence boost for the rising senior.

“I had one inning in a scrimmage and that was it,” he said of his junior season at N. Iredell. “We really didn’t have another third baseman and we had a good 1-2-3 (pitching staff). I was looking forward (to Legion) because our pitching coach (Randy Martin) at North has been working on my pitching because I’ve got to pitch a lot next year. So we’ve been working on it, but I really haven’t gotten to use it until now in Legion. At one point my head was moving too much. I’ve improved my leg drive a good bit.”

Mocksville made the most of five hits, three of which came in a four-run second. With Ryan Thiel and Hunter Daywalt aboard, Logan Allen dropped down a bunt hit to load the bases. One out later, Christian Brown singled. With two outs, Parker Aderhold walked with the bases loaded. On the next pitch, Little provided a two-run single.

Post 174 tacked one on in the third. Lawrence Hancock singled to advance Daywalt, who would score on an error to make it 5-0.

Little, who singled in the fourth, was Mocksville’s lone base runner over the last four innings, but it didn’t matter because of Mocksville’s one big inning and because of Greensboro’s three errors. (Mocksville, by contrast, was perfect defensively.)

“They brought in a reliever in the fifth and he was throwing the ball hard,” Kurfees said.

Daywalt took the ball in the seventh and slammed the door as Mocksville kept the good vibes going after a 7-6, eight-inning win over Davidson County three days earlier. It was limping along at 2-10 before suddenly finding a pulse.

“I don’t give a (durn) what anybody says. They can say (Greensboro) didn’t have all their players or this and that,” Kurfees said. “They were better than us. They were stronger than us. They were bigger than us. They were older than us. And we beat ‘em. One reason is the guys are willing to work. If they weren’t working and practicing, we’d still be getting pounded like we did by Randolph. I play those good teams right off the bat because I want these kids to see what they’ve got to do and what Legion ball is about. We have improved. I’ve got (Matt) Tullock and (Patrick) Usher helping us. They’ve been working and loving it.”

“Simmons has been an outstanding defensive player (at second base and outfield),” Kurfees said.