Cana/Pino: Frostland transformed into a wedding venue for a day 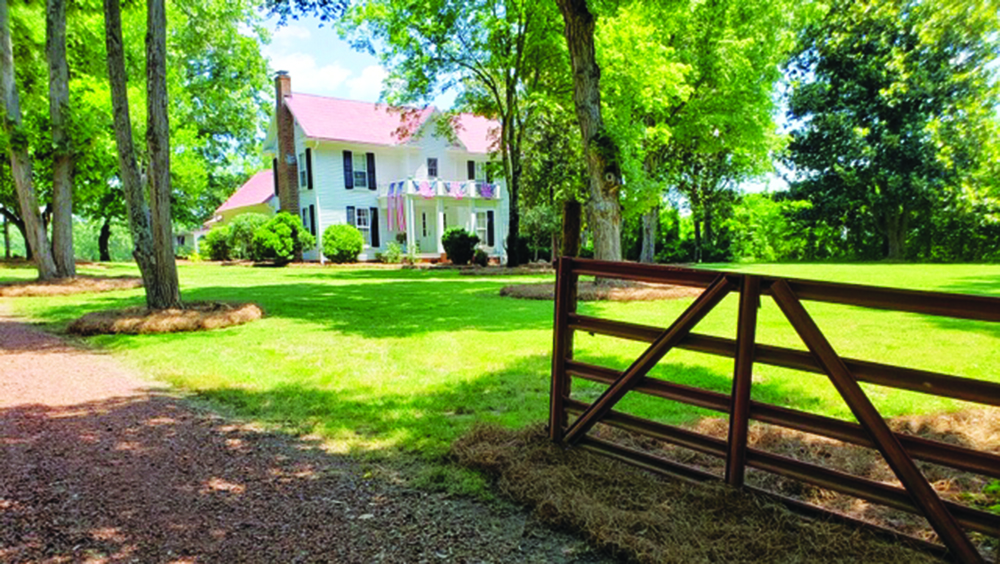 The last couple of weeks have been busy for the usual sleepy villages of Cana and Pino. That has not been the case since June.

The first Sunday in June was homecoming at Wesley Chapel United Methodist Church. A large crowd attended the worship service and then enjoyed a fellowship meal. Special guests and former members of who attended included: Glenda White Sapp of Wyo; Jimmy; Liz Dull of Clemmons; Ryan and Christie Gentry Gardner of Charlotte, who joined her father, Pete Gentry, and her sister’s family, the Brock familyFamily, Andrea, Andrew, Scarlet, Stella, and Turner Brock of Mocksville, and Andrew Brock’s mother, Margaret Jo Harpe Brock, for the worship and lunch. Marlene Dull Trivette was joined by her grandsons,  Nick of Greensboro and Sean Rouse, of Pino,  her daughter, Vicki, and Robert Buchin for worship and lunch.

Members of the West family who worshipped and had lunch with their mother, all of Pino. and Betty Etchison West, were:Frances West Tutterow, Elizabeth Tutterow Burchette and her son, Joseph,  Al and Susan West Cujas and their son, Oliver, Henry West and his son, Alexander.  Homecoming was a bit sad for the West family family because of the death of Roland West, who was always proud to have his family join him on the back church pews for homecoming.  Members of Wesley Chapel appreciated having Angela Riddle Williams play the piano for homecoming. Angela is the director of music at Farmington Methodist.

The people of Pino were glad to have Tom and Toni Horton back at Wesley Chapel after they spent the winter in Florida.

Bob and Kathy Ellis, Kathy’s sunt, Ann Cline, Rick and Judy Wilson, and Judy’s mother, Violet Coursey, spent a week on the N.C. Outer Banks. They enjoyed their visit, including a visit with Kathy’s Aunt, Peggy Cline Angell in Manteo. The Ellis’ grandson, Jayden Ellis, of Raleigh is coming to spend some time with his grandparents, Kathy and Bob Ellis, this summer.

The family of Pastor Arnold Gosnell will be going to Lake Junaluska to attend the Western N.C. United Methodist Annual Conference. Lisa Dixon West will attend as the Lay Delegate for the Farmington Charge, and Kathy Ellis will accompany Lisaher.

The people of Cana received sad news that Glenna Collette Lagle died.  Glenna Collette, the daughter of Noah and Tossie Ferebee Collette, grew up in Cana in the last house in the village before the Eaton’s Church Road. Glenna moved to Mocksville from Cana after she married Andrew Lagle.  She died at her home in the Aldergate Retirement Home in Charlotte where she moved when she could no longer live alone at her home in Mocksville. Glenna moved from Mocksville to Charlotte to be near her daughter, Susan Lagle Valenti, and enjoyed living at Aldergate.  Glenna was active in Mocksville Presbyterian.  Her funeral was held at the church. She was buried at Rose Cemetery in Mocksville beside her husband.

Saturday, June 11, Amy Cujas, daughter of Al and Susan West Cujas of Cana, and Ryan Applegate, son of Jim and Sandi Applegate of Jacksonville, Fla., were married in the back yard at Frostland, Amy’s ancestral home, and the present home of Frances Etchison Tutterow, who served as hostess.

Amy’s great-great grandparents, John and Nana Cain Etchison, bought Frostland from Nana’s uncle, Johnny Frost, in 1916.  Johnny Frost, who was Amy’s great-great-great uncle, built the house  now called Frostland in 1886, 30 years before it was purchased by John and Nana Etchison. It was there in the backyard at Frostland in front of a beautiful magnolia tree that Amy and Ryan spoke their wedding vows in a ceremony led by the Rev. Darrin Crotts, a longtime friend of the Cujas family.

Amy was given in marriage by her father, Al Cujas, and her mother, Susan West Cujas. Many of the bridesmaids and groomsmen were college friends of Amy’s and Ryan’s, who graduated from Catawba College in Salisbury.

Approximately 175 people attended the wedding and the dinner. Dancing followed  in a large tent.

Many out-of-town friends and relatives attended: Amy’s aunt, Marty Etchison Babcock and her cousin, Patrice Etchison, from Cary; her aunt, Rachel Etchison from Siler City; three of Al Cujas’ brothers, their wives, and his sister all of Ford City, Pa.

A large number of the groom’s family, including his parents, his brother, and his grandparents, as well as aunts and uncles came from Jacksonville, Fla. The visitors from Florida were entertained one day by Amy’s cousins, Ina and Donald Kamentz, who shared Cana history, which included a visit to the Old Cain’s Store.

The groom’s parents hosted a dinner at a restaurant in Statesville for the members of the wedding party and their families.

Minutes before guests were to begin arriving in Cana for the wedding, a large tree fell across Cana Road between the Old Cain’s Store and Frostland.  Donald Kamentz and Joe Burchette quickly sprang into action and were well on the way to getting the giant tree removed by the time William R. Davie Fire Department members arrived.  Another emergency averted.