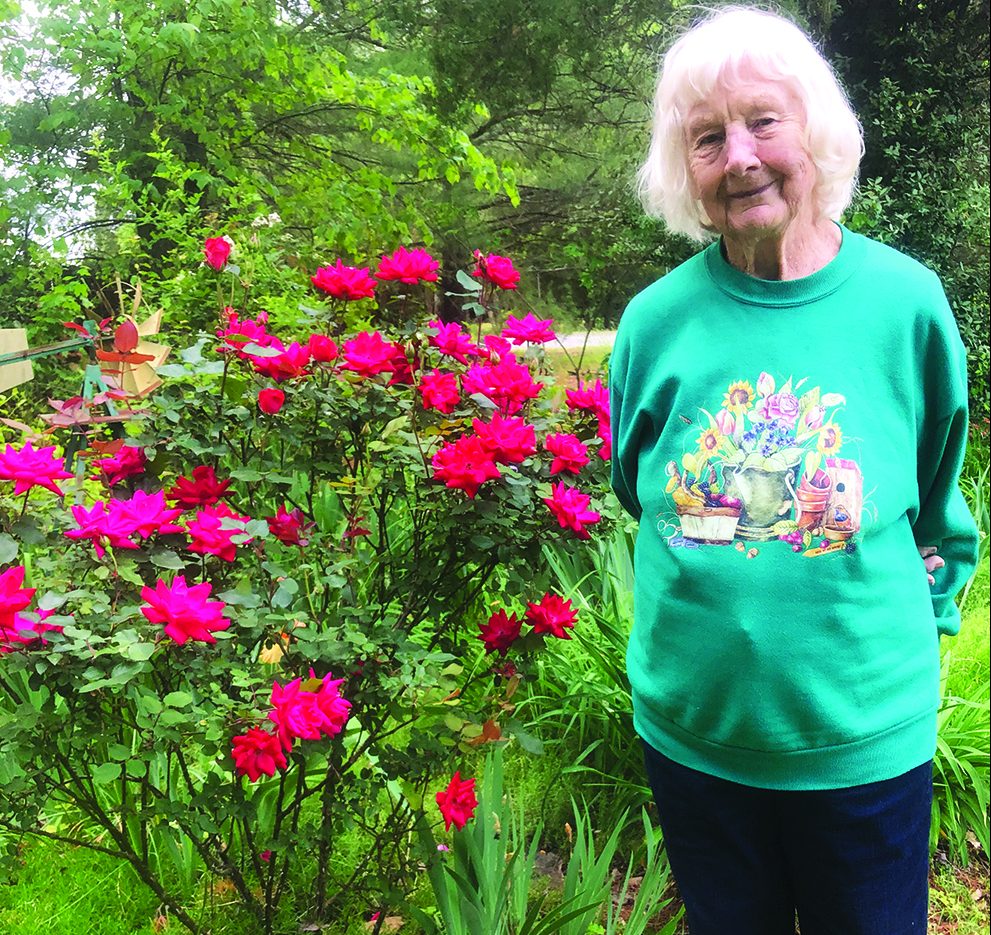 Annie Belle Potts DeHart Wishon, lifelong resident of Davie County, is celebrating her 90th birthday on June 22. She was born 1932 as recorded in the Bible, delivered by Dr. Hardin in the Great Depression. Her pioneer parents of nine children were Charles Franklin Potts and Bessie Mae Brown Potts.

She began her education in 1938 at Courtney School and graduated from Farmington in 1950 with the Senior Citizenship Award.  She scored the highest on the state spelling word test in 11th-grade. She made A-plus on a soil conservation paper and was one of 15 students selected for a field trip in high school.

Esther Horne Hawkins was her most influential teacher for grades 8-12.  She wrote her a note which Annie Belle has carried in her heart: “I approve your perseverance. Keep it up and you will surely succeed!”

Later, Annie Belle spent a year at Forsyth Tech taking public speaking, reading, and psychology plus three months at Forsyth Hospital training to be a nurse.

Growing up, her family had 18 cows to milk daily and she began at age 7 milking two cows per day before and after school.  She moved, as was common in those days, to Cool Springs where their rental home burned and they lost everything when she was in fifth grade. She recalls her father had killed hogs that day before the fire and had the meat seasoned and in a meat box which burned all day the next day.

Annie Belle recalls having a rabbit holler to make money. She caught her first rabbit at age 11 and walked miles to sell it to her teacher, Sally B. Hunter, for 15 cents. She had already skinned the rabbit. Annie Belle said that was big money. One could buy a cone of ice cream for a nickle.

Here family were sharecroppers raising tobacco, cotton and sugar cane for cash crops. She learned early on to work and was paid 10 cents a pile to strip the cane for molasses.

Annie Belle worked for B&F Manufacturing in the cutting room and marking patterns at age 18. She also worked textiles at Wonderknit and Hunter Brothers in Statesville.

Annie Belle Potts married Fred DeHart in 1957 in their Mocksville home.  They were married for 27 years until his death at age 52. Fred was in an accident working for the state in which both legs were broken in several places. He retired at age 48 and then got a blockage and cancer.

Annie Belle met Grady Wishon, her second husband in 1987. He told her on the second date he believed God had brought them together. They had 25 years of happiness before his illness took his life.

When she was able, Annie Belle loved vacationing with her family in the Smoky Mountains, eating out, going to the beach, and going to Cana, Va. for plants and vegetables.

Annie Belle, as she is affectionately called, is known by her nieces and nephews for her potato salad, deviled eggs, vegetable soup, and the best biscuits.  She made the biscuits for the first opening of Burger King in Mocksville. She also opened up the old Hardees which was originally near Miller’s at 5 every morning to make at least 500 biscuits. Another person would come in at 5:30 and start cooking meat and stuffing biscuits to meet the long lines outside waiting for biscuits at 6.

Annie Belle loves to retreat to her happy place”on the outdoor patio surrounded by hostas, geraniums, day lilies of every variety, gardenias, lovely impatiens, and a cool breeze on the hottest days. You won’t look far to see plants being rooted like a mini-greenhouse. If you look closely, you may spot a few tomato plants, squash, strawberries, and cucumbers, too.

Her passion to read, music, and the study of the mind fill her days.

“Everyone in the world needs to be loved and needed or they will not have a purpose in life,” she said. Her doctors tell her she is sharp with a grand memory because her mind stays busy. She loves reading in her collection of Guideposts.  “I am blessed; I don’t even wear glasses except to read.”

Annie Belle Wishon is a lifetime member of Bear Creek Baptist Church. She began church at age 12 and was saved at revival when she was 16 with Rev. Bill Hill preaching. She attended and served her church regularly until her health has prevented her from attending in the last three years. She was secretary of the church at age 23. She taught the Primary Sunday School class for children 6-8 years old for a dozen or more years.  One could also find her at choir practice singing tenor regularly.

Annie Belle says the thing in life that has blessed her the most is having taken care of her two husbands during their last years of illness and the years she spent taking care of a nurse, Betty Brawley, who had had an aneurism, for several years.   “That was God’s work, and I was privileged to do it.”

This article is based on what we know about

our aunt and what

she has told us.