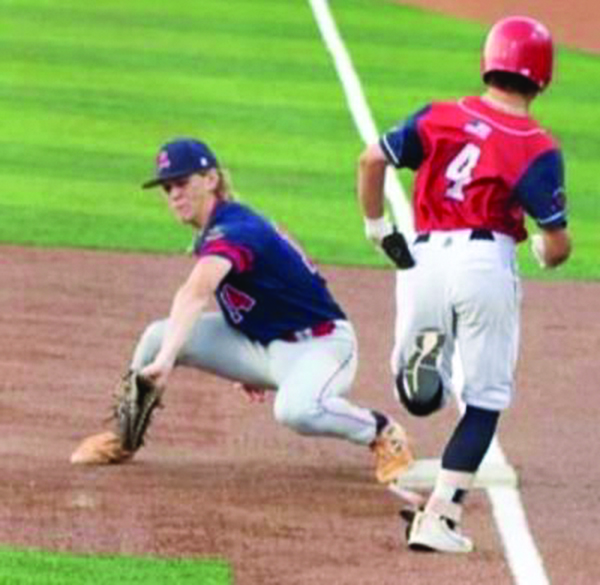 After losing to Rowan County and Davidson County, the woes continued for the Mocksville Senior Legion baseball team.

Post 174 got off to a great start at Hamlet on June 4, but it fizzled and lost 5-3 as Hamlet avenged a 12-5 Mocksville win a week earlier.

Dan Loyd pitched effectively for all six innings, but he was undermined by four errors.

Mocksville took a 2-0 lead in the top of the first inning. Loyd’s single plated Blake Little, and Jackson Sink’s double made it 2-0.

Mocksville did a little two-out damage in the second. With nobody on, Parker Aderhold doubled and came around on Little’s hit. It was 3-0, but Little’s base knock proved to be Mocksville’s fourth and final hit of the night.

Hamlet got a run back in the second and it used two walks and two hits to force a tie in the third. The tiebreaking run in the Hamlet fifth scored on a two-out error. Hamlet’s insurance run in the sixth also came in on an error.

Mocksville got on the board first again, this time at Kannapolis on June 6, but it would fall flat and lose to another team that it defeated in the first meeting.

In the top of the first, Aderhold scored on a Ryan Thiel hit. The 1-0 lead, though, vanished in a span of eight pitches in the bottom half. A walk was followed by a home run, and three pitches after that, Kannapolis cracked another homer.

The game turned lopsided in the fifth. With the score 5-3, Mocksville retired the first batter, but three hits, three walks, an error and a hit batsman followed as Kannapolis pushed the margin to 10-3.

Give Mocksville credit for battling until the end. In the seventh, Thiel walked, Zach Stevens singled, Kannapolis made an error and Parker Simmons singled to cut the deficit to two and put runners on the corners with no outs. Alas, Kannapolis turned a 6-4-3 double play and Mocksville’s rally was over.

The loss turned big games by Little and Thiel into footnotes.  Little went 3 for 4 with a homer – Mocksville’s first dinger of the season – and Thiel went 3-3 with two doubles and a walk.

Some good news: Hunter Daywalt, a rising sophomore at Davie, made the most of his Senior Legion debut after getting called up from the junior team. He not only pitched into the fifth inning, he went 2-3 with a double. When he left the mound, he slid over to third base.

“He made every play (at third),” Kurfees said. “He killed the ball in batting practice. He’s got more power than any of them other than Blake. Blake has a little bit more because of his age. I’m sure Hunter was (nervous), but he played good.”

Simmons (2-3) was the fourth Mocksville player to get multiple hits. Stevens went 1-1 as Mocksville matched Kannapolis in hits (11-11). Kannapolis got payback for a 9-4 loss on May 29 despite making six errors.

Two nights later at High Point, it was much of the same. Mocksville experienced flashbacks as it fell by double digits for the sixth time this season.

For the third straight time during this five-game losing streak, Mocksville scored first. In the third, Brown and Aderhold had back-to-back hits to give Mocksville a 1-0 lead.

The momentum was short-lived as High Point put up a three-spot in the bottom of the third. The bottom of the fifth was frightful. After Mocksville retired the first batter, High Point scored six runs on four hits, three walks and an error to extend its lead to 10-1.

High Point had 11 hits to Mocksville’s three. Aderhold went 2-3, Brown 1-2 and that was it. High Point got 10 runs in 4.2 innings against starter Darren Shore, but only three were earned. When Major Bryant relieved, he became the 12th different pitcher to see mound time for Mocksville (2-9 overall).

The good news: four of the five losses during the skid have been non-division games.

“You’ve got to realize, this team is very young playing against older guys,” Kurfees said. “If everybody sticks with Legion ball next year, we’ll have everybody coming back but two (Little and Logan Allen).”