Little lights out in relief 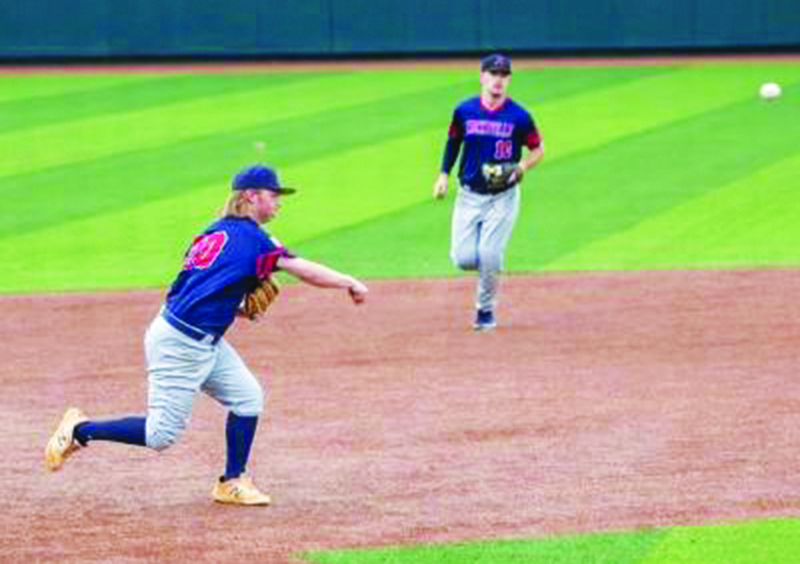 Mocksville’s Senior Legion baseball team entered a home game against Davidson County with bad mojo. It was beleaguered by a five-game losing streak, which followed a four-game skid to start the season.

But Mocksville rolled up its sleeves and picked up a 7-6, eight-inning win that nobody saw coming on June 9. Yeah, it’s only one win, but it came in Southern Division play and it was a giant one for its psyche.

“They were out there dog-piling in a regular-season game,” coach Charles Kurfees said. “They were pumped up. They had never done anything like that before.”

Not only had Mocksville dropped five games in eight days, it lost 5-1 to Davidson County on June 3, when it only managed five hits and fell behind 4-0 in the first inning. Thanks to heroics from Parker Aderhold, Blake Little and Dan Loyd, Mocksville (3-9 overall) squared its division mark at 1-1.

“It was huge for us,” Little said.

“It was really exciting,” Aderhold said. “It was great to see the team really come together and get that first division win. It puts us on the right path to win more division games.”

Starting pitcher Cole Whitaker worked around traffic in the first two innings and came away unscathed. In the first, his two-out walk loaded the bases, but he induced a grounder to first baseman Loyd for the third out. In the second, the Warhawgs had two on with one out. Whitaker got the leadoff batter to pop up to the catcher and he fielded a comebacker from the next batter.

Whitaker (4.2 innings, four hits, two earned runs) ended up with a no-decision, but he was a big reason why Mocksville was in position to win.

“What’s lost in the whole game is Cole’s pitching performance,” Kurfees said. “It’s a shame that he didn’t get the win.”

Whitaker, a rising junior at Davie, has been enhancing his profile in recent weeks.

“He went out there and shoved it,” Little said. “Cole’s been solid all season. He really turned the corner (in this game), getting out of those jams.”

“Cole’s amazing,” Aderhold said. “Every time he goes out, he gives us a chance to win.”

“I trusted my offspeed to get weak contact (in the first two innings),” Whitaker said. “That continued to be the game plan. I really enjoy playing for this team because I get a lot of playing time that helps me figure out what I need to work on. During the high school season, I really didn’t get to throw a changeup. But during these first few games, it has been my best pitch and is my key to having a good outing.”

Mocksville missed an opportunity in the second. With Hunter Daywalt and Jackson Sink aboard, the next two batters got out. Davidson capitalized by breaking through in the top of the third. A guy singled, then stole second and third before scoring the game’s first run on a groundout.

Mocksville got even in the bottom half when Loyd’s single plated Little.

Davidson surged to a 3-1 lead in the top of the fifth, but Post 174 had a big answer in the bottom half. A Parker Simmons walk and hits by Aderhold and Little loaded the bases. Loyd mashed a two-run double. A run scored when Ryan Thiel’s ball was errored. When Daywalt singled, the bases were loaded again. Loyd scored on a wild pitch and Logan Allen pushed in a run with a groundout as Mocksville scored five times to take a 6-3 lead.

“They played hard,” Kurfees said. “It seems like they all enjoy playing. We work the heck out of them in the evenings. They want to be there.”

Mocksville was up by three, but securing the win was anything but easy. In the top of the seventh, a single and double chased reliever Sink. Kurfees gave the ball to Little, who got ahead 0-2 on his first batter before splitting the plate with a fastball that was deposited over the fence for a game-tying homer.

Little showed resiliency when a loss here would have been a blow to the gut. He was absolutely lights-out after the homer, striking out the next three batters to keep the score 6-6. And after Mocksville went down 1-2-3 in the bottom of the seventh, Little resumed his spectacular work.

Facing the No. 9 batter in the top of the eighth, Little fell behind 2-0 but wound up getting a strike three swinging. The leadoff man was next, and he struck out swinging. Then came a ferocious battle. The No. 2 batter, Badin Gusa, who is headed to Pfeiffer this fall, fouled off five two-strike offerings, then struck out looking.

Six Ks in two innings wasn’t too bad for someone who never pitched during his two-year varsity career at Davie (2020-21) and had only pitched one inning this season for Mocksville. He fired off 42 pitches, 28 of which were strikes.

Before throwing an inning against Hamlet on May 28, Little’s last mound outing was “probably freshman year on JV,” he said. “The first day of practice I saw five or six arms go down to the bullpen. I knew that wasn’t going to be enough for a season, so I said: ‘Hey Kurf, I can go out there and throw strikes if you need me.’”

Assistant coach Todd Bumgarner said Little “has a nasty slider that he can throw for strikes. It’s pretty much unhittable if he locates it well.”

The amazing part: Little learned the slider moments before going to the bump for the seventh inning on May 28.

“Before my first outing, I was in the bullpen,” Little said. “All I had was a fastball and a curveball. Caleb Adkins and Cole Whitaker were down there. I was like: ‘Hey, how do you throw a slider?’ They taught me how to throw a slider in the bullpen right before I went in. I got two strikeouts with the slider that inning.

Mocksville manufactured the winning run in the last of the eighth. With one out, Lawrence Hancock fouled off a two-strike pitch before drawing a walk. He advanced into scoring position when Simmons bounced out to the pitcher. That brought up the reliable leadoff man, Aderhold, who drove a pitch deep in the left-center gap. The ball hit off the left fielder’s glove and fell and Hancock motored home.

“It did cross my mind that I could hit a walk-off, but I was just trying to make a good swing and pass the torch to the next guy,” Aderhold said.

Aderhold has consistently barreled pitches all spring, hitting .319 as a Davie junior and posting a .314 average for Mocksville. He’s second to Little, a college freshman who is hitting .333.

“I’ve played for two teams that I enjoy playing for, and I’ve also had great coaching,” Aderhold said. “I have high confidence every time I go to the field.”

“Parker’s been awesome in the leadoff spot,” Little said.

Notes: Mocksville, which had dropped four straight one-run games over multiple seasons, enjoyed its first walk-off win since a 16-15 decision over Stokes County on July 7, 2019. … Both teams had nine hits, and both teams had three errors. … The top three batters – Aderhold, Little and Loyd – went 2-5, 1-4 and 2-4, respectively. Loyd had three RBIs. … Post 174 has gotten a boost from Hunter Daywalt, who played JV as a Davie freshman. He went 1-2 with two walks. “He came up against Rowan and he’s really surprised me,” Little said. … Sink (1-4), Logan Allen (1-4) and Simmons (1-3, walk) had one hit each. … Alex Naylor, a rising senior at North Davidson High, is a dangerous leadoff man for Davidson County. His father, Eric Naylor, was a star shortstop for Davie in 1987.