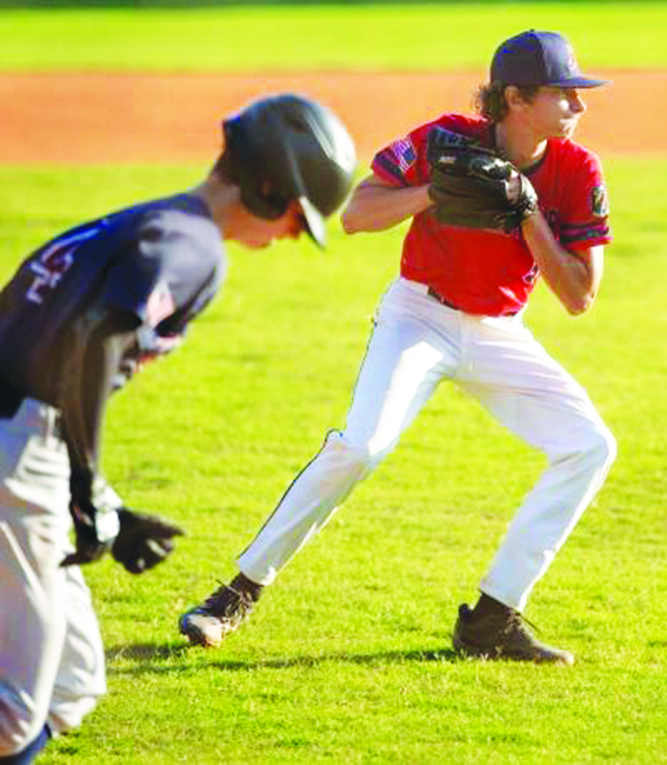 Kannapolis had already bagged two wins over Rowan County when Mocksville’s Sr. Legion baseball team hosted the Towelers on May 29.

Cole Whitaker and Mocksville – get this – won convincingly over Kannapolis, 9-4. It was Post 174’s second straight win after an 0-4 start.

Whitaker came out of the blue with a six-inning mound performance. Kurfees gave the ball to the Davie sophomore, and the kid more than answered the bell. It was an awesome sight after he only pitched 12 innings in nine relief appearances for the varsity War Eagles this spring.

Assistant coach Todd Bumgarner said he’s confident Whitaker is going to be a mainstay for Davie in 2023 and 2024. Kurfees was blown away by his performance. It was Continued From page B1

the kind of showing Mocksville direly needed to back up No. 1 arm Darren Shore in the rotation.

“Cole was tough,” Kurfees said. “I mean, Kannapolis has got a good team, but Cole pitched his butt off. It was great to see him pitch like that. If he can keep pitching like that all summer and get better as we go … because he didn’t get a lot of innings during high school. He’s proved that he can pitch. Look at Kannapolis. Their 1-6 guys are as good as it gets, and he was able to mow ‘em down.

“Their first batter hits one off the dang wall; it didn’t start off like it was going to be a very good night. Cole got his confidence built up and he competed. He knew he had to compete, and he did, and we played good behind him.”

“We really worked hard yesterday before we played,” Kurfees said. “We put in a real good practice and we competed our butts off.”

A home game against Rowan County on June 1 was reminiscent of Mocksville’s first four games when it gave up 52 runs to Matthews, Randolph and Concord.

There was simply nothing Mocksville could do as Rowan scored at least one run in all seven at-bats while collecting 20 hits and taking advantage of four errors.

“They rolled out twenty-some players, and we weren’t very good tonight,” Kurfees said. “We’re going to keep doing the best we can do.”

In the Southern Division opener at Davidson County on June 3, Post 174 never had a chance – even with Shore on the hill, even with an error-free defense.

Davidson scored four runs – all with two outs – in the first inning, and Mocksville (2-6 overall) never threatened to erase the deficit.

Shore was tough his last four innings, scattering four hits and only allowing one run.

In the second, Jackson Sink (single) and Parker Simmons (walk) reached, but Mocksville came away empty-handed. In the fourth, Blake Little and Ryan Thiel had hits, but again Mocksville couldn’t push anything across. Its lone run came in the sixth, when Thiel walked and scored on Sink’s double.