Smooth sailing as new clerk of court sworn in 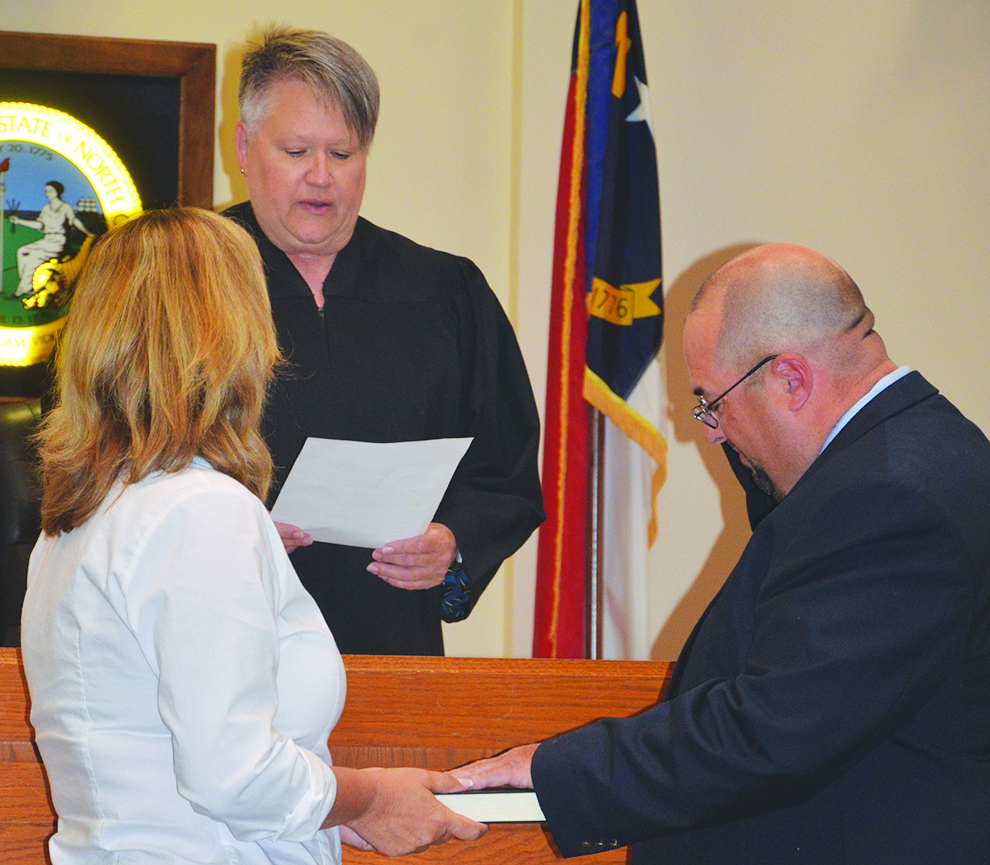 Superior Court Judge Lori Hamilton issues the oath of office as Jason Lawrence is sworn in as Davie's new clerk of court. His wife, Katie, is holding the Bible. - Photo by Mike Barnhardt

Jason Lawrence almost didn’t apply for that job with the Davie County Clerk of Court just over 10 years ago.

He had applied for a federal job in the past, and knew the piles of paperwork that would have to be filled out was just too cumbersome.

But friends persisted, and Rob Taylor, assistant district attorney, encouraged him to take the plunge.

Lawrence remembers that job interview with now retired clerk, Ellen Drechsler. He told her he would like to have her job some day. She wrote that in her notes.

Last week, Lawrence was sworn in as the newest Davie County Clerk of Court, replacing Cindy Harris, who had served since Drechsler’s retirement. She plans to retire in September. Lawrence will serve in this capacity until after the November election. As the only candidate, he will likely be sworn in as the elected clerk in December.

A few days into the job, and Lawrence, who said he entered the job with no expectations, was pleased.

“I love it here. I love all the people I work with,” he said. “Everybody here knows what they’re supposed to do, and they do it.

“There’s still a lot I have to learn, and there’s big changes coming down the road. No two days are ever the same.

“I am proactive and a team player who supports my team members. Like any good coach, I believe my success is measured by the performance of my team. I lead by example and do my best to make sure my team has the tools they need to succeed.”

A business and marketing graduate of UNC Charlotte, Lawrence and his family moved to Davie some 13 years ago after he wife was transferred to a business in Clemmons. They looked from Davie County to Lewisville to Winston-Salem to Kernersville.

“We liked what we saw here. We could have gone anywhere. We’ve loved it and never regretted it.”

Davie County, Lawrence said, is the perfect place to raise a family.

He hopes to make the county’s residents proud, especially the ones who had faith in him and cast ballots in his favor.

“It’s humbling,” he said. “I’m grateful for the opportunity. There’s a sense of pride in the number of folks who showed up to vote for me. I want to make them proud.”