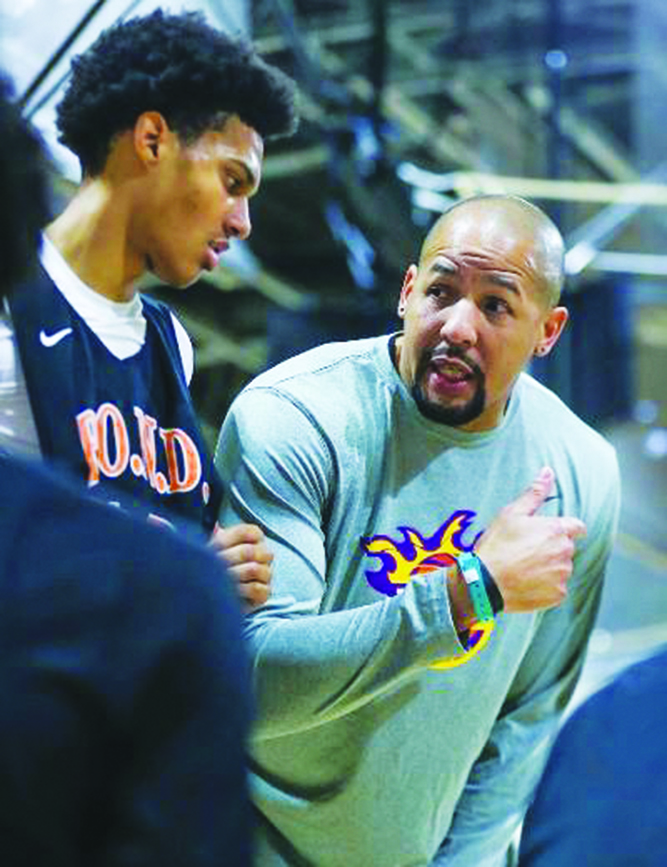 Davie tabbed one of the hottest young coaches in the area to fill the position as head coach of the boys basketball program. Josh Pittman, who guided Winston-Salem Prep to 24 straight wins last season and has a .677 winning percentage in his seven-year career, was named the Davie coach on May 26.

“From talking with friends, I heard about the Davie job coming open, and it just felt right to go in and interview and just put my name in the hat and see what happens,” Pittman, 45, said. “With God’s blessing, everything turned out OK.”

As an AAU coach with Team/BOND, Pittman has coached a handful of Davie players in recent years.

“A few of my AAU kids played at Davie – Owen McCormick and Michael Walton,” he said. “And I dealt with Brooks (Johnson) and Landon King a little bit as well.”

The Winston-Salem native had a remarkable career as a player at East Forsyth High and UNC Asheville before a 17-year run as a professional player overseas. He hung up his sneakers in 2014 and took a year off to figure out what he wanted to do in his next career – teaching and coaching.

His coaching career began at Carter G. Woodson, a charter school in Winston, in 2015.

“I was substitute teaching while I was working on my (teaching) license and my master’s degree,” he said.

His first Woodson Eagles squad went 14-16 in 2015-16. “We started off a little slow because we had kids who were just learning to play,” he said.

There was a dramatic turnaround in 2016-17 as Woodson went 23-5, losing in the state semifinals. “The second year I had some kids transfer in and the program took off,” he said.

After losing six seniors to graduation, Pittman had to rebuild in 2017-18. The Eagles still managed a winning record at 16-12. “I still thought it was a great year because we were young,” he said. “We only had one senior that year. Most of them were freshmen and sophomores. We ended up pulling off some big wins. We ended the year winning four out of five.”

Pittman decided to take a new job in 2018. He took over at Lexington High and the Yellowjackets went 18-10 in 2018-19, tying for second in the conference. That season ended in the second round of the 2-A playoffs.

They took things up a notch in 2019-20, going 22-6 and tying for first in the league. Lexington bounced North Surry and Hibriten in the playoffs. Mountain Heritage stopped Lexington in the third round.

Everyone played a condensed schedule in 2020-21 because of COVID. An already short schedule got even shorter for Lexington, which finished 4-6. “We had a lot of freshmen and sophomores on varsity,” Pittman said. “I felt like we were going to close out strong, but we had a COVID case and they just shut down the season.”

Pittman moved to Winston-Salem Prep in 2021, and his amazing coaching success continued. The Phoenix went 25-3 and reached the 1-A semifinals, where they lost 72-66 to eventual state champion Hayesville, which squeaked out the title game in overtime against Chatham Charter.

“At Winston-Salem Prep, everything was great,” he said. “We made a historic run, especially with a lot of people telling me that it wasn’t a great job to take. I thought if I could have kids just buy-in, play a certain style and adjust to the personnel that we have that we would be OK. The kids did those things and it was a perfect run for us.”

Why did Pittman leave a juggernaut program? There are several reasons.

“I’ve always heard nothing but great things about Davie,” he said. “It’s one high school in the county, so you don’t really have to worry about chasing kids and people trying to recruit your kids after you put the work in and stuff like that. So it was an amazing opportunity.”

“I think I’ll teach a class of African American Studies and I’ll help out with the ESL Department (English as a Second Language) because I’m licensed in Spanish and ESL,” he said. “Being overseas and playing in those Spanish-speaking countries, I kind of picked up the language on my own and self-taught myself to read and write and speak the language. Then when I came home, it was just sitting down and passing the Spanish practice and the ESL practices.”

The War Eagles went 13-11 last year under Bruce Wallace, marking their fifth straight winning season. But Za’haree Maddox, Zymere Hudson and Blake Walser were seniors, and people are expecting a decline in 2022-23. Pittman is well aware of the challenge he’s facing.

“I know we lost nine seniors,” he said. “I’m trying to get locked in with Davie and get in the gym when the dead period is over, so we can get to work and start developing our skills and get prepared for this upcoming year. I want to see what we’re doing and what we need to work on and make sure we’re extremely competitive this first year. Get these guys accustomed to playing big minutes in big games and then from there take off.

“A lot of people are telling me we’re going to have to rebuild and all that. Hey, it is what it is. I trust in God to handle everything and I trust in the kids to buy-in. I’ve talked to a couple of kids and they’re already excited. No matter what, I think we’re going to learn, we’re going to get developed and we’re going to compete. And to me that’s the most important thing, and then winning will take care of itself.”