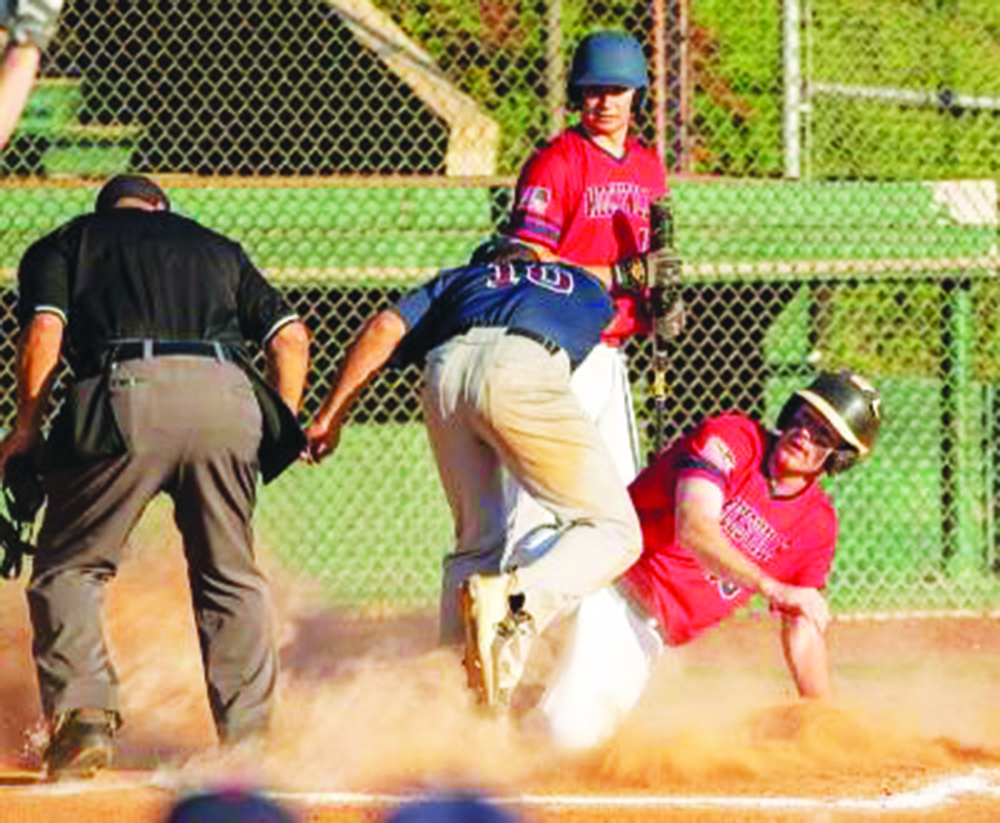 Going into the Mocksville Sr. Legion’s second game of the day on May 28, Post 174 was 0-4, had gotten outscored by 32 runs and there was no compelling reason to believe anything would change against Hamlet.

Concord hammered Mocksville 17-1 in the first game of the day; then Hamlet drubbed Concord.

Believe it or not, Mocksville beat Hamlet going away, 12-5, the win snapping a nine-game losing streak dating to last summer.

“Hamlet beat Concord so bad it was unreal,” coach Charles Kurfees said. “They had a couple of major league scouts here looking at a boy from Hamlet. They are good, but we found a way to beat them. They are really good. I was shocked.”

The game, though, could not have started much worse for Mocksville. After the first two batters were retired in the top of the first, Hamlet used a homer, an error, a walk and a double to stack up a 3-0 lead. At this point, the season’s running score was an unsightly 55-21.

But then it was as if Mocksville had a bite of Snickers, and it turned its frown upside down.

It answered Hamlet’s three-run first with a three-spot of its own in the bottom half. Parker Aderhold, Blake Little and Dan Loyd all scored on passed balls to tie the game.

Hamlet regained the edge in the second, scoring two more two-out runs. Making matters worse, Mocksville was stranding baserunners. In the second, Parker Simmons and Christian Brown had singles but were left on the bases. In the third, Ryan Thiel, Jaylin Gwyn and Lawrence Hancock loaded the bases, only to see their team come up empty.

The explosion that Mocksville desperately needed came in the fourth. After Simmons, Logan Allen and Brown all walked, Aderhold stroked a single. Then came two-run doubles from Little and Loyd.

The top three batters in the order – Aderhold (2-3), Little (2-4, two RBIs, double) and Loyd (2-3, two RBIs, double, walk) – combined for six hits and five RBIs. Gwyn (2-4) and Simmons (2-2, two RBIs, two walks) also had multiple hits. Brown went 1-3 with a walk. By rolling up 11 hits and putting up crooked numbers in the first, fourth and sixth, Mocksville overcame its second five-error game of the day.

Coming in, Mocksville was giving up 16.2 runs per game. Darren Shore stopped the bleeding with a six-inning effort on the hill. He only permitted four hits, one earned run and offset three walks with eight strikeouts. After surrendering five runs in the first two innings, he settled down and held Hamlet to one hit from the third through the sixth, a strong performance that dropped his ERA to 1.90 across two starts.

In his first mound appearance of the season, Little shut the door in the seventh.

“Shore did well,” Kurfees said of the Starmount junior. “He is a bulldog. And our catcher made a big difference in that game. Thiel (a junior from Mt. Tabor) really kept Darren focussed. He’s got the job there.”

Notes: This was Mocksville’s first win since a 12-4 decision over Kannapolis on July 5, 2021. “Getting that first win was good,” Kurfees said. … A daring Hamlet runner stole home against the righthanded Shore. “I kept telling them he’s going to steal home,” Kurfees said. “Bam – he was in there.”

Legion gets off to rough start