Burton exploded onto the scene in ’82 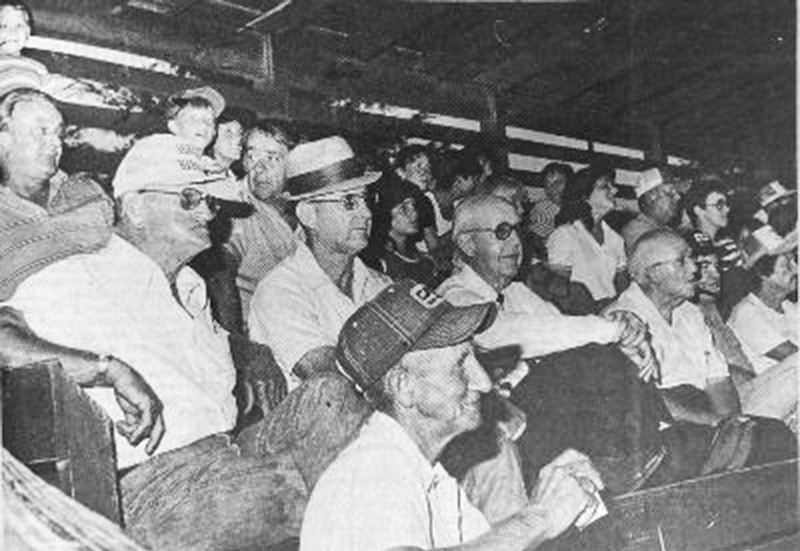 Third in a series on the 40-year anniversary of the 1982 Mocksville Legion baseball team.

After about 10 days of practice, the 1982 Mocksville players were jacked up for the return of American Legion baseball at Rich Park.

But no. Mother Nature had a smirk on her face.

The skies finally cleared and Jeff Burton exploded onto the scene. Consider the Burton moments in the first 15 days of the season:

• Two home runs against Lexington, along with getting the win in relief.

• A home run against Thomasville, and also seven dominant innings on the mound.

• A homer against Lexington and a nine-inning performance on the bump to lift his record to 3-0 through five Mocksville games.

• Another homer, this time against Mooresville.

Burton not only was the winning pitcher for the first three Mocksville wins, he had four dingers in six games. This was awesome.

Burton’s one and only season in Mocksville produced many memories, including a present that was waiting for the players when they showed up for the first practice. The present was silver and green, leaning against the dugout fence.

“When we got to the first practice, there was a row of Easton bats,” said Burton, who clubbed 12 homers in 1982 for West Forsyth and won Central Piedmont Conference Player of the Year. “I remember them – they were silver with green letters. There were probably 15 of them. I remember going to the first practice and I was hitting them over the light poles. Coach (Ron) Morgan says: ‘Jeff, I never knew you had that kind of power.’ I said: ‘Well, I didn’t either. New bats and new balls do great things.’”

“If you had a Green Easton, you had something,” shortstop/leadoff man Barry Whitlock said.

“Daddy (Sonny Kurfees) and James Hugh (Edwards) went over to Bocock’s (Bocock-Stroud Company in Winston-Salem) and they bought all those bats,” current Mocksville coach Charles Kurfees said. “Well, somehow or other they broke right in the middle of the season. Bocock’s couldn’t get any more bats. Well, they were raising hell and said we’ve got to have bats. The handles have broken on these. I know they got bats from North Davidson High School. I don’t know where else they got them from, but they got a bunch of bats so they could finish out the season.”

Nine days after the original opener was washed out, Mocksville debuted on a Saturday night at Lexington’s Holt-Moffitt Field. In the sixth inning, No. 3 batter Burton and Mike Wilcox blasted back-to-back mammoth homers against Marty Phillips. Burton’s fourth hit of the game was a towering homer in the ninth. Whitlock rapped three hits, including a triple, as Mocksville romped 11-5. Burton took over on the mound in the sixth and blanked Lexington over the final four innings.

“You’d want Burton on your team,” Kurfees said. “He would fight a rattlesnake.”

“I remember seeing Jeff pitch for the first time,” said pitcher Dan Riddle, who has lived in Raleigh since 1988. “He was not a big guy, but now he threw hard. He really put a lot into his pitches. I remember the grunt he used to have.”

Burton, who lives in Midway, can distinctly remember the first homer.

“We were behind and we had two runners on with no outs,” he said. “I called timeout and went and talked to Morgan. I said: ‘You want me to bunt?’ He said: ‘Why?’ I said: ‘To get the guys over.’ He said: ‘No, I want you to swing.’ About two pitches later, that’s when I hit the first home run.”

“He must have hit it over that left-field bank,” Whitlock said. “He was righthanded and he didn’t hit to opposite field – I’ll tell you that.”

Evening thunderstorms wiped out games against Mooresville and Statesville, and after being idle for seven days, Mocksville’s second game was against Joe Ferebee’s juggernaut – Rowan County – at Newman Park. Rowan players are taught from their first day that winning is sewn into their uniforms, and they smacked Mocksville 11-6 as ace lefty Tim Kirk racked up 10 strikeouts. Rowan catcher Tony Myers slammed a three-run homer in the first to set the tone. Wilcox and Steve Hardister had two hits each in defeat.

“That dang Tim Kirk,” said Hardister, who has lived in Roanoke, Va., since 1989. “He was a heckuva pitcher. He proved it. He went on and played at (North) Carolina, and I think he played with Pittsburgh and maybe the Braves in the minors. He had this tailing, cut fastball that would come in the middle of the plate and cut off the outside of the plate. Then he would jam you with a slider to the inside. So he would keep you guessing.”

Two days later in the much-anticipated home opener, Mocksville held a 3-1 lead through six behind two-hit efforts from cleanup man Wilcox, Burton and No. 7 stick Scott Vogler. Whitlock had all three runs. But in the seventh, Mooresville’s Tim Horton turned the game upside down with a grand slam. Mocksville would lose 7-3, ruining exceptional defensive outings by Whitlock and catcher Kenny Riddle.

Mocksville was 1-2, but a serious surge would begin the next night against visiting Thomasville, which was coached by Davie County native Dub Potts, who was the architect of the Tommies in 1977. He guided Thomasville for seven years before moving back home and beginning his Davie County education career in 1984.

“It was exciting, especially when you got the opportunity to come to Davie County where they had good fan support,” Potts, 73, said. “Mocksville and Rowan were the best two places to go. We would almost as soon go away to play as we would stay home because we didn’t have much of a crowd. And Mocksville would pay us to come over here and play them. We worked that out pretty quickly because I was pretty much a one-man show at Thomasville – and Thomasville’s a football town – and Mocksville had a complete organization.”

Two days after going seven innings, rubber-armed Burton went nine at home against Lexington. He shook off solo homers by Duane Hughes and Keith Wilson and ran his record to 3-0. As if that wasn’t enough, Burton launched a three-run homer in the fifth as Mocksville cruised 11-4. Todd Cassidy had two hits, Randy Taylor had a two-run hit during a six-run seventh, and Whitlock, third baseman Hardister and right fielder Bivins shined in the field.

Burton’s star kept rising one night later at Mooresville, where he slammed his fourth homer in six games to help Mocksville win without strain, 8-2. Wilcox doubled and tripled. But the biggest offensive game belonged to Whitlock, who had three hits, including a bases-loaded double.

“Through high school, Big League and American Legion, I didn’t play with any better than Barry,” Bivins said. “He was a cut-up, but not once the game started.”

The winning pitcher at Mooresville was D. Riddle, who was still throwing in the eighth when the game was stopped by rain. After graduating from Davie in 1983, the 6-2 righthander played at UNC Charlotte in 1984-85.

“I really didn’t know anything in high school,” he said. “It was grab it and throw it as hard as you can. After (playing at Charlotte for two years), I didn’t see my baseball career maturing, so I made the decision to quit that and move on to academics (as a Computer Science major). Overall it was a great experience. My sophomore year was the year we had an immense amount of talent. Nine guys on that roster played in the minors, two made the majors (Stu Cole and Jeff Johnson) and two guys ended up umpiring in the majors (Fieldin Culbreth and Eddie Bean). So 11 people off that roster made it to the pros. We were stacked.”

D. Riddle spent two summers with Mocksville. There was one wacky, surreal night when he struck out 18 and walked 12.

“I must have thrown 250 pitches,” he said. “I threw a split finger and at the time I didn’t know how to control it. It was hard to hit. UNC Charlotte came to see me that night. I don’t know what their take on that was. At that age, I’m like: ‘Hey, I had 18 strikeouts.’ But their opinion was probably: ‘Yeah, but good gosh, you had 12 walks. You can’t do that at the college level.’”

After six games, Mocksville’s offense was humming, with six batters hitting north of .400. But Post 174 was subdued by Rowan arms Terry Goodman and Randy Bell. Whitlock and Wilcox banged out two hits, but Rowan was too much, winning 7-2.

On the bright side, Johnson, a Davie sophomore, blanked the first-place opponent in front of a large home crowd for the first four innings. He had a two-hitter going, but Rowan seized control in a five-run fifth, an avalanche that was aided by Mocksville errors.

“JJ was very deceptive,” D. Riddle said. “When he took the mound, he came right at you. I mean, he dared you to hit him, and he had a good breaking pitch.”

Mocksville recovered quickly. One night later at Finch Field in Thomasville, it was Hardister’s turn to shine. The other stalwart from West Forsyth pitched marvelously and also provided the offensive energy in a 4-3, 10-inning win.

“I was pretty pumped for Legion ball,” Hardister said. “I was really tickled to get to come. Me and Jeff would get together and carpool for practice and games. We were both working summer jobs, so we would finish work, meet up and drive out to the park. There was a sense of family. Everybody was welcomed in. The Whitlock family was really great to me. I remember going to Miller’s after games – open face steak sandwich with fries and a Cheerwine.”

In the second, Bivins knocked in Wilcox. Hardister carried that 1-0 lead into the seventh, when Thomasville rallied to tie. In the ninth, Cassidy and Burton set the table with singles. The next batter was Hardister, who showcased a flair for the dramatic on more than one occasion in ‘82. He blasted a two-run double to right-center to put the visitors ahead 3-1 lead. In the last of the ninth, Potts’ club fought back with three hits, including a homer, to force another tie at 3. If it weren’t for a nifty double play, the Tommies likely walk it off. With two outs in the 10th, Burton and Wilcox reached on errors. The fifth batter, Hardister, came through again with a hit that plated Burton with the decisive run. D. Riddle got the win in relief, and outfielder Lefty Stewart contributed by making a diving catch in the eighth.

“All those boys were good that came from out of the county to play,” Bivins said. “We didn’t know them from Adam’s housecat.”

Hardister was a football/basketball/baseball athlete at West Forsyth and made all-conference twice in baseball.

After the summer of ‘82, Hardister played college baseball. He spent two years at Montreat, then played on the first two teams in UNC Asheville history (1985-86). He was a third baseman/first baseman/pitcher for the Bulldogs.

“I had a really good junior year,” he said. “I thought I was going to be the next Ron Cey. My senior year wasn’t too good hitting. I did a lot of pitching, but by that point, my major league dream had vanished.”

“Steve was always a clutch hitter,” said Chris Mackie, a former longtime Sports Editor of the Clemmons Courier. “He was great.”

After pulling out the tense battle at Thomasville, Mocksville was rolling, a 4-1 stretch and a 10.8-runs-per-game attack vaulting it into second place in the seven-team Southern Division. And things were about to get even better.

“The practices were tough,” Bivins said. “They were not a piece of cake. So I think by the time we went through all of those practices together, we were gelling as a team.

“One thing they’d do, James Hugh or somebody would be hitting at home plate and as a fielder you were at the backstop – nailing fungos as hard as they could hit it, knocking the (crap) out of the ball.”