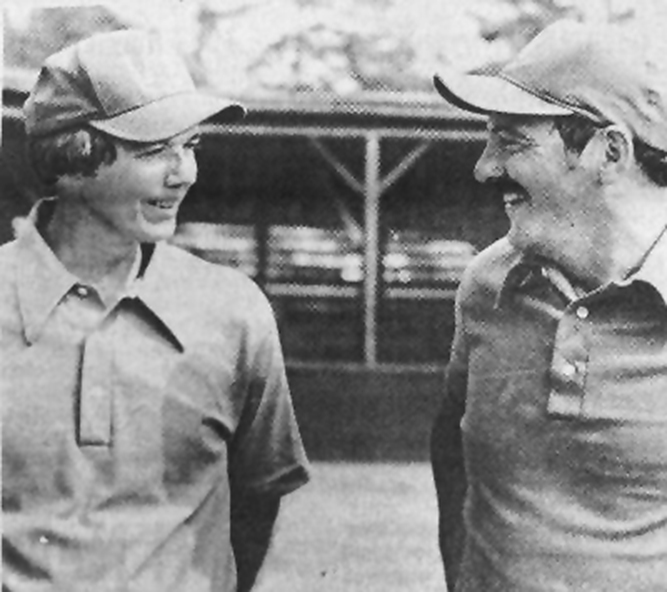 Second in a series on the 40-year anniversary of the 1982 Mocksville Legion baseball team.

Ron Morgan made a name for himself by playing second base for a dynasty men’s softball team, Poindexter Lumber Company. That led to a friendship with James Hugh Edwards, which ultimately led to Morgan landing the job as head coach of the 1982 Mocksville American Legion baseball team.

“James Edwards submitted my name,” said Morgan, who is 78 and lives in Winston-Salem. He lived in Davie County at the time. “He got to know me through softball. I played with Poindexter Lumber Company for about 12 years. We traveled all over the United States playing softball every weekend.

“I sort of went through an interview with Dick Nail, Joe Whitlock, Sonny Kurfees … and I can’t remember the rest of them. I was lucky to get it and lucky to have a good team starting off. Good gracious, we had a great team. Once I got the coaching job, I started recruiting and went to see them play. James and I went to see a lot of (high school) games.”

The first order of business was getting a commitment from a Forsyth County phenom named Mike Wilcox, who was a freshman at East Carolina at the time.

“Willy’s mother was my sister’s best friend growing up,” Morgan said of Wilcox. “I just went and talked to him. Gosh, he was good.”

Flash back to the summer of 1981, the year before Mocksville brought back Legion for the first time since the 1960s. Wilcox played Big League at Southwest Little League.

“I don’t know how Ron Morgan knew about me or what, but he called me out of the blue and told me what they were doing,” said Wilcox, who lives in Clemmons and has been the head golf pro at Tanglewood since 1998. “I was like: ‘Heck yeah, man.’ So I was excited about it. I was getting ready to play again at Southwest. I was like: ‘That sounds like more fun than what I’m getting ready to do, so let’s try it.’”

Wilcox attended Reynolds, graduating in 1981, but he lived in West Forsyth’s district, which made him eligible for Mocksville’s roster. Although that seems cut and dry, the Wilcox pick-up created a little controversy.

“Some Legion people were saying Wilcox was illegal and they had some big meeting and had a big falling out,” said current Mocksville coach Charles Kurfees, who was 13 at the time. “Back then about everybody had a radio station. They were talking about us being illegal. They claimed Wilcox couldn’t play because he went to Reynolds High School, but he lived in West Forsyth’s school district. Rowan County found out and made a big deal about it and tried to get all these other teams to protest.”

Nothing came of it and Mocksville had a center fielder/lefty cleanup man with jaw-dropping power and speed. Before arriving in Mocksville, Wilcox played at Reynolds alongside the outrageously gifted Tommy Gregg, who would play in the major leagues from 1987-97.

“It was really fun playing with Tommy,” Wilcox said. “He played center field at Reynolds and I played right field. Then we did the same thing at Wake Forest. It was really cool.”

Gregg was a three-time All-ACC baseball player at Wake. He also played on the Wake football team for three years, catching passes, returning kicks and eventually getting inducted in the Wake Hall of Fame.

Wilcox attended East Carolina in the 1981-82 school year. The Pirates went 34-14 in 1982, but Wilcox wound up not playing on the team. He transferred to Wake, and under NCAA transfer rules, he had to sit out the 1983 season.

“I lost a year of eligibility because I transferred,” he said. “Back then if you transferred … they didn’t have this transfer portal. I traveled with the team.”

In 1983, Wilcox had a front-row seat for the final year of Bill Merrifield’s illustrious Wake career. The two-time All-American hit .476 with 17 homers and 64 RBIs and was drafted in the second round. Merrifield, the father of Kansas City Royals star Whit Merrifield, has lived in Oak Valley for over 20 years.

“Bill was a heckuva player,” Wilcox said. “He was a great shortstop. He was quick but he wasn’t that fast. I don’t know how many steals he had that year, but he did a delayed steal almost every time he tried to steal a base, and it worked almost every time. I was like: ‘How do people not pick up on this?’ He was a stud.” (For the record, Merrifield had 17 steals in 17 attempts.)

Ask Kurfees about the 1982 Wilcox and you have to call home to say you’re going to be late.

“That’s my dad’s all-time favorite Legion player,” he said. “In a playoff game against Rowan at Rich Park, Wilcox threw out Tim Kirk twice at the plate. Kirk pitched four years at North Carolina and I don’t know how many years in the Atlanta Braves organization.

Here’s one: “One time a boy tagged up from second base and Wilcox threw it to the playground from the center-field wall,” Kurfees said.

Here’s another one: “Daddy (Sonny Kurfees) was good friends with Wes Livengood. His dad, Wes Livengood Sr., played Major League Baseball and was a scout with the Philadelphia Phillies. For some reason, daddy got a bunch of batting-practice balls that they used in BP in the major leagues. They have a bigger center in them and the ball flies. Major leaguers put on a show in batting practice. When (Mocksville) was taking batting practice, there was a girls softball game being played at Rich Park, and Wilcox hit a ball that hit a girl in the arm playing second base. … My daddy thought the world of him. If you made a list of the best players that have ever played here, he would probably be No. 1.”

Wilcox lived up to his advanced billing, hitting a team-best .420 and doing impossible things.

“He was older than all of us,” said Chris Renegar, a 1982-83 Mocksville player who lives in Yadkin County. “He physically had filled out and was mature beyond his years. He was great in center field. He was fast. I mean, he was really head and shoulders above everybody else. The game was easy for him.”

“As a sophomore in high school, he was the only guy that I had ever seen that I thought was major-league caliber,” said John “JJ” Johnson, a Mocksville player from 1982-84 who has lived in Colorado for 20 years. “He was big and he was extremely fast. And he had a cannon. Everybody thought he was going to go pro.”

Another multitalented star for Mocksville was shortstop/leadoff man Barry Whitlock, who was No. 2 with a .409 average and later had a hall-of-fame career at Guilford College.

“Barry was exceptional at shortstop and he shined at hitting,” Renegar said. “I think his freshman year at Guilford he won the hitting title.”

“Barry was a really tough out,” Johnson said. “He was so scrappy, really talented, great arm.”

“We used to play Guilford when I was at Wake,” Wilcox said. “Barry was fast, a great fielder. I mean he had all the tools.”

Bivins was an ‘82 standout with the third-best average (.316). He also had a fantastic nickname: “Boomer.”

“I love John,” Johnson said. “He doesn’t get a lot of credit, but he was a really good athlete in high school. I distinctly remember we were playing (for Davie) at West Rowan and him and I hit back-to-back home runs. I’ll never forget that.”

Mocksville had two players from West Forsyth – Jeff Burton (first base/third base/pitcher) and Steve Hardister (pitcher/third base). Burton was a dude. Hardister, as you already know, hit the most famous homer in Mocksville annals on the Fourth of July, 1982.

“Jeff Burton was hard to handle on the mound,” Renegar said. “I’m going to tell you right now, he was incredible.”

“We played high school ball and that was it (before 1982),” Renegar said. “The ones that were young enough played Babe Ruth ball (in the summer). I was young enough to do that, but most of the guys didn’t have anywhere to play. Ron Morgan and James Hugh Edwards came to our school and actually came to some games and then recruited us from that.”

Taylor played breathtaking defense. He could also handle the bat quite well.

“I played baseball with Randy at Forbush for three years, and I remember Randy striking out one time in three years,” Renegar said. “For Forbush he played third base. When I was pitching and they hit the ball to Randy, I didn’t worry about it. He was a short, stocky guy and he could play.”

“Johnson was not a regular starter in 1982, but he’s one of the best players we’ve ever had,” Kurfees said.

Burton, D. Riddle, Johnson and Hardister formed a four-man pitching rotation. Three of them were seniors, the exception being a prized sophomore, Johnson.

“We didn’t have a closer,” Johnson said. “It was whoever felt good that night.”

Add it all up and Mocksville had an epic lineup. Their 16-13 record in ‘82 may not look like a big deal, but posting a winning record in Year One was a major achievement when you consider the Southern Division’s talent level back then.

“I’d put them against that 1989 team (that finished second in the state) any day,” Kurfees said. “It was a whole different ballgame back then. Concord was freaking stacked. Rowan was stacked. Mooresville had Jimmy Meadows and he played in the Yankees organization. Statesville was really good. They had all the boys from Taylorsville. Donna Whitlock’s husband, David Jordan, played on that team.”

“That was a heck of a ballclub,” Renegar said. “It was an awesome group.”

“Out of the three years that I played Legion ball, that was probably our most talented team,” Johnson said. “I was a little intimidated because there were some really good ballplayers on that team.”

Everything fit together perfectly, from the coaching staff to the players to the bus driver.

“My assistant was Dan Marion,” Morgan said. “We worked great together.”

“Great guy,” Johnson said of Marion. “He always had a chew of tobacco in his mouth. … Ron Morgan was a character and all the players liked him. He was a real player’s coach. He liked to mix it up and try to get a lot of guys in the game. He knew the game. You don’t have much practice before the season starts, but they worked us pretty hard. I mean, it wasn’t for sissies. I don’t have any bad memories at all.”

The always-hilarious Joe Whitlock was the bus driver.

“They actually went out and bought a bus,” Renegar said. “They had it painted up with ‘Mocksville American Legion’ on the side and Joe was the driver.”

“He was a joke every other minute,” Johnson said of J. Whitlock. “We would always go to Miller’s after a game for a footlong hot dog. I remember them giving gas money to some of the guys from Starmount, Forbush and Mt. Airy.”

As the season opener approached, Mocksville was about to rake in hundreds at the gate.

“It was such a big deal back then,” Renegar said. “I mean, you were signing autographs all the time.”