A league of his own: Track star sets record after record 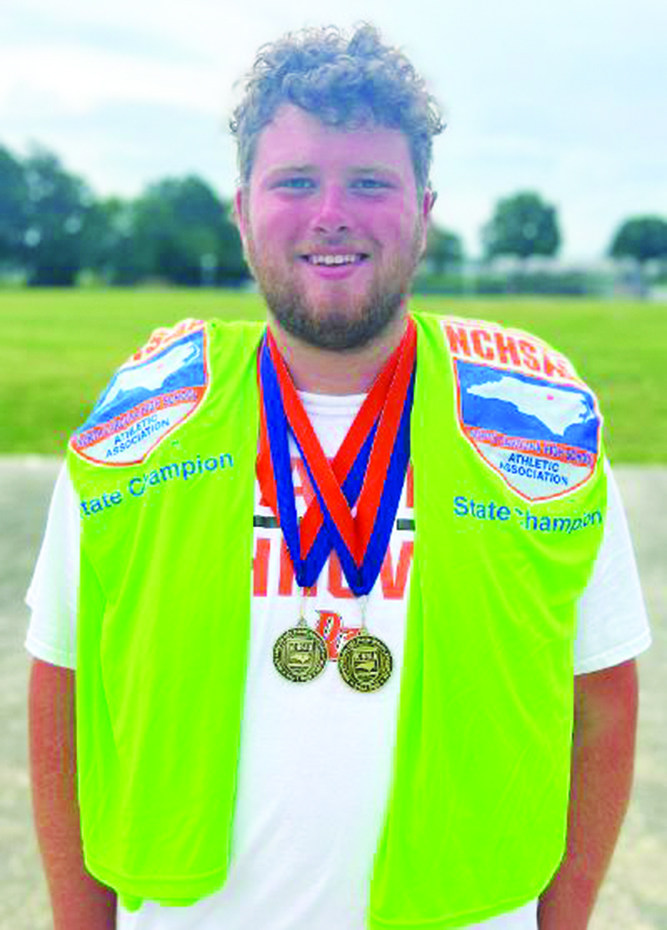 The conclusion of any meal is dessert, and dessert for Davie’s part-man, part-machine Spencer Williams meant a pair of gold medals in the state track and field meet at N.C. A&T on May 21.

In a Hollywood ending to his high school career, Williams took home titles in the shot put and discus.

“I couldn’t see it getting any better,” he said.

In both events, Williams, who has received a full ride to North Carolina, dueled with Sun Valley senior Delmar Chambers, who has signed with N.C. State.

In the shot put prelims, Chambers turned in a 58-2 throw. Williams followed with a modest-by-his-standards 58-4. Chambers failed to improve on his next four throws, but Williams hit a speed bump himself, fouling on four straight throws.

“I had an issue throughout the meet of watching the shot,” Williams said. “When I throw it, I have to stay in the circle, obviously. I had issues watching it when it came out of my hand, and that caused me to lean forward and fall out. Eventually I stopped doing it and I was able to come out with that big one at the end. They all were going about the same distance, but I was falling out the front.”

Chambers saw no improvement on his sixth throw. Now it was time for Williams’ sixth and final throw. He heaved it – brace yourself – 64 feet, 3.75 inches to set the all-class state championship meet record, surpassing a 61-4.5 mark that had stood since 1975.

“That was my last throw in the shot put as a War Eagle,” he said. “I really wanted that meet record, and I knew if I just got something out there that I would be able to surpass that (record). I took a pretty normal competition throw and it got out there.”

“People didn’t see a lot of the things I’ve done, but everybody got to see the culmination of all my four years of effort,” he said. “It’s a huge blessing to finally see it pay off. This year I had a rough indoor season. To be able to come back from that with such an explosive outdoor season was really huge.”

Two hours after claiming the shot put, Williams’ journey through Oz continued in the discus.

Williams’ first attempt, though, resulted in a foul.

Williams’ second throw proved to be golden – 180-4, or 10 feet better than Chambers. He was going to become the first War Eagle to ever win track-and-field state titles in multiple events.

He was going to threaten the discus state record of 189 feet, but a throw in the neighborhood of 190 was wiped out by a foul.

“Yeah, that was a big throw,” he said. “I did the same thing at regionals. We measured the foul at regionals at like 194. I finally got all my power behind the throw without it coming off my fingers weird. But I was offbalance at the front, so I ended up falling off to the left.

“But I still have nationals. I’m really going to work discus hard for the next month to be able to get a hard throw and a good throw mixed together.”

Notes: Williams had nothing but kind words for Chambers, who likely would have won two state titles any other year. “He’s a really nice guy,” he said. “He’s going to N.C. State, so we’ll be competing next year. He’s had a great year. It’s been cool to see how much he’s progressed.” … In the regional as a freshman, Williams finished seventh in the discus at 133-11 and 14th in the shot at 37-0. He did not qualify for the state. The 2020 season was wiped out by COVID-19. As a junior, Williams won the state in the shot at 60-2 and was second in the discus at 169-8. As a senior, Williams single-handedly collected 20 points to put Davie in 10th place as a team. … Williams will compete in the national championships at the University of Pennsylvania from June 17-19. “It will be my last high school meet,” he said. … Before Williams, four War Eagles won state titles in track. The list: Sarah Gardner (shot put in 1982), Samantha Murillo (400 meters in 2001), Anna McBride (3200 in 2011 and 2012) and Caleb Mathis (indoor 55 hurdles in 2013).