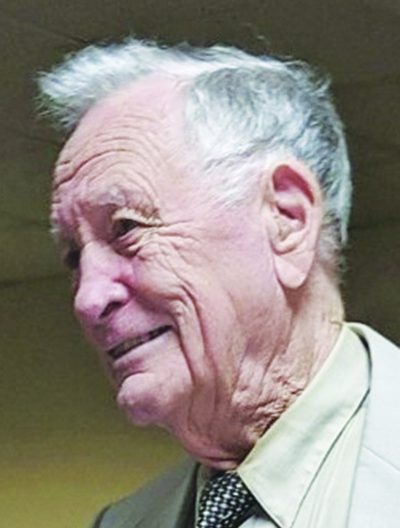 The Mocksville man was stationed on the island  in the Philippine Sea during World War II. It had just been captured by the Allied Forces and was being used as an air strip to launch planes to fight against the Japanese.

But he was there when the 504th bombing group moved in, still not knowing that the bombardier aboard the Enola Gay was none other than fellow Davie resident Col. Thomas W. Ferebee.

“Nobody knew what they were there for, what they were going to do. They made fun of him,” Bowden said during the induction ceremony for Ferebee into the N.C. Aviation Museum Hall of Fame in Asheboro. “They were still under secrecy.”

On Aug. 5, Bowden had gone with his fellow crew members on their own mission, a 14-hour flight, and listened to Japanese broadcasts on the way back to Tinian. They didn’t understand the language, but they knew something big had happened.

They learned when they arrived back that the Enola Gay – with Ferebee as the bombardier – had dropped an atomic bomb on Hiroshima.

“Tom Ferebee, now they didn’t win the war. With the dropping of the atomic bomb, they ended the war,” Bowden said.

Japan, he said, had a million soldiers ready to die for their emporer.

“The dropping of these two bombs ended the war, and I think it saved, I’d say the neighborood of 12 to 15 million lives. It (World War II) would have been the greatest bloodbath the world has ever seen.”

He was proud of Ferebee and the rest of the Enola Gay crew, not only because he was also from Davie County, but because they stood behind their actions – even though most of them, too, didn’t know what was going to happen.

“They never backed down one bit from what they did,” Bowden said. “The did the job they were sent over there to do. Tom Ferebee was an excellent bombardier. All I can say is that I’m proud.”

He later met Ferebee, and they became friends.Bowden accepted the honor on behalf of Ferebee.

At age 97, Bowden was accompanied and introduced at the induction ceremony by Grady McClamrock Jr.

“Col. Ferebee was a Davie County boy. And we’re Davie County boys and we’re proud of Davie County,” McClamrock said. “It’s a little rural county about 35-40 miles from here (Asheboro). The only thing Davie County really prides itself on is Daniel Boone and Col. Thomas Ferebee.”

While most of the stories about Daniel Boone are a myth, Ferebee’s story is true.

“He’s the man who dropped the bomb that stopped World War II,” McClamrock said. “We’re proud to be from Davie County.”