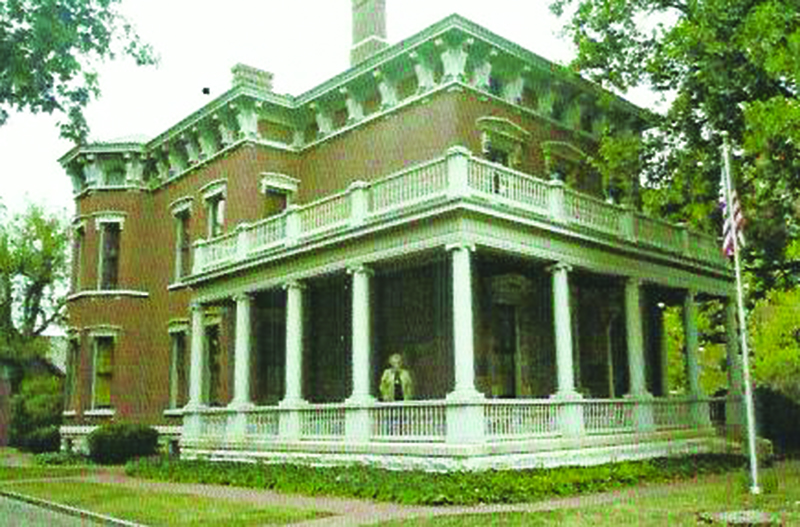 Who is the only grandson of a President of the United States to become a President?

There has been more than one son of a President to later become President, but to date only one man has served in that position that was once held by his grandfather.

That was Benjamin Harrison, who was the grandson of William Henry Harrison, elected in 1840, inaugurated in 1841, and served only 31 days when he died in office.

When Cleveland and his wife, Frances, were saying good-bye to the staff as they left the White House at the end of his first term, Mrs. Cleveland told the staff to take care of the place because they would be back.  The staff probably did not believe that because that had never happened, but it did.  Cleveland ran against Harrison again in 1892 and won probably much to surprise of the White House.

The Harrison Family played a part in the history of the United States for many years. Benjamin’s great-grandfather, Benjamin Harrison V, was a signor of the Declaration of Independence and he served three terms as governor of Virginia.  His grandfather, William Henry Harrison, was elected President of the United States.  Benjamin’s father, John Scott Harrison, was an Ohio congressman.  This history would seem to indicate that public service was held in high esteem by the Harrison family so it is not surprising that the younger Harrison followed in the footsteps of his ancestors.

Benjamin Harrison was born in North Bend, Ind. He was home-schooled at the family’s two-story brick farm house along with his brothers and sisters until he was 14 when he went to a private school to prepare his college. His family could not afford to send him to one of the prestigious schools in the East so he attended Farmers College in College Hill, Ohio, and then Miami University in Oxford, Ohio.  He then studied law. While studying law, he married Carolina Lavinia Scott, the daughter of the headmaster of  a girl’s school in Oxford. After he was married, he continued his law studies and was able to pass the Ohio bar when he was 21.

The Harrisons moved to Indianapolis, Ind., where Benjamin got a job as Crier at the Federal Court.  That allowed him to get acquainted with many lawyers. He was then invited to become a partner with William Wallace, a well-known lawyer. When he was 27, Harrison ran as a Republican for the office of Reporter for the Supreme Court of Indiana, and he won. At the beginning of the Civil War in 1860, Harrison was offered the command of regiment of Indiana volunteers.  He accepted and distinguished himself as a leader during the war. Benjamin Harrison was promoted to Brigadier General in 1865.   After the war, Harrison returned to his old job and then went into private law practice with the man who became Indiana’s governor.  Mr. Harrison was smart and a good speaker—these attributes allowed him to became a leading political figure.

Harrison’s success as a lawyer and politician allowed him to begin thinking about building a bigger home for his family.  He bought the lot at 1230 North Delaware St. in Indianapolis. He and his wife planned and finally had a house built there. That house which was/is a big two-story brick house cost ing $28,000. That house remained their home until their deaths.

Politics continued to be important to Harrison, and he was finally appointed as a U.S. Senator by the Indiana Legislature. By the end of his term in the U.S. Senate, Indiana senators were elected by the people, not appointed by the legislature.  Harrison ran to be returned to the Senate, but lost that election. That was not the end for Benjamin Harrison.  In 1888, the Republican National Convention was deadlocked between two prominent men.  Someone finally said “nominate Harrison” and that is what happened. Mr. Harrison campaigned from the front porch of his home at 1230 North Delaware St. and received more electoral votes than President Cleveland so he became the President, even though Cleveland got more of the popular vote.

Mrs. Harrison was an outstanding lady in her own right. She was elected the first President General of the Daughters of the American Revolution. The First Lady, who had never really been strong, became ill and died before the election. Benjamin Harrison, who really did not have his heart in campaigning, lost the election. He went back to his home in Indianapolis alone.

A visitor to the house on North Delaware sees a fine example of Italianate architecture. The furnishings in the house are still those used by the Harrison family. Around every corner there are items which reveal something about the lady who designed the house and lived there until the family moved to the White House.

In the dining room, there is china that was hand-painted by Caroline Harrison. Beside the stairway to the second floor, there are watercolors painting done by Mrs. Harrison, and, in the nursery, there are floral watercolors which she painted. It seems that the things that stands out most during a visit to that house is the artistic abilities of the former First Lady and the many items which were connected to  the long political career of the former president.

Some years after the death of his wife, Caroline, Benjamin Harrison remarried, a fact to which his family would never be reconciled. There are items in the house which also belonged to the second wife and the daughter which was born to her and Mr. Harrison.

The house at 1230 North Delaware St. in Indianapolis, is owned by the President Benjamin Harrison Foundation and is open to the public except during January. Call 317-631-1898 for information on tours.